A trivia question for American food shoppers: AquAdvantage, the genetically engineered Atlantic salmon being sold in Canada, is available in how many U.S. supermarkets?

The answer is none, despite being approved as safe to eat by the U.S. Food and Drug Administration in late 2015, the first GE animal to be so approved. In fact, the fast-growing transgenic Atlantic salmon won’t make its way to U.S. stores and restaurants for nearly two years, perhaps longer, said Dave Conley, spokesman for AquaBounty Technologies. The Maynard, Mass., company developed the fish at its facility in its lab and hatchery on Prince Edward Island, Canada, and has been feeding some to adult size in a small test facility in Panama.

However, wild salmon is a big Alaskan home industry, and Sen. Lisa Murkowski, R-Alaska, didn't like GMO salmon competing with her state's wild catch. She and other Alaskan officials got Congress to hold up sale of the fish in the U.S., forcing FDA to block AquAdvantage imports until the agency issues new regulations to indicate "genetically modified" on food labels. FDA is mandated to issue that regulation by late July but has not indicated when to expect the rules.

AquaBounty expects to comply with FDA requirements, Conley said, but is waiting to see just what the labeling rules will be.

“What most people think is that we are producing fish ... and that it’s already in the store. In fact, that’s just not the case. We are going from a research and development operation to a commercial one, so we have to build facilities and scale up.”

To that end, the company is renovating a fish-feeding facility in Albany, Ind., and plans to deliver fish eggs there in May or June and produce its first salmon for U.S. markets in late 2019 or early 2020, Conley said. That site will produce 2.6 million or more pounds of salmon annually when finished. He said another production facility is being built at Rollo Bay on Prince Edward Island and it will produce at least 500,000 pounds a year. 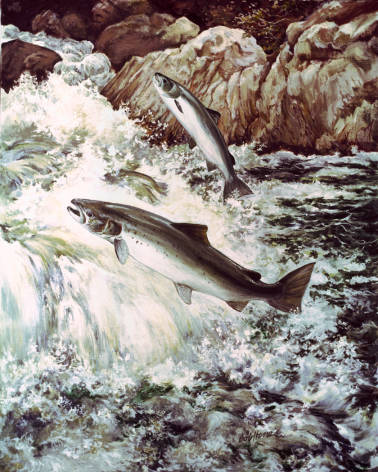 AquAdvantage Salmon are Atlantic Salmon like this tweaked for faster growth.

AquAdvantage salmon was created by adding a growth hormone-regulating gene from a Pacific chinook salmon, with a "promoter" from an ocean pout, to the genes of an Atlantic salmon. The fish can grow nearly twice as fast as conventional salmon, and with the world's constantly shrinking wild fish catch, expanded and economically cheaper production of farmed fish is needed, the company says. But, so far, AquaBounty's commercial sales have included only about 5 tons in Canada last year, Conley said. “We have limited capacity ... in Panama and that production is not continuous,” he noted.

Scott Faber, chief executive for Just Label It, a proponent of GMO labeling, said that labeling AquAdvantage for GMOs (genetically modified organism) satisfies what his group is fighting for. Faber is also the senior vice president for government affairs with the Environmental Working Group.

One Alaska fisheries representative, Jeremy Woodrow, communications director for the Alaska Seafood Marketing Institute, appeared to express similar sentiments when asked about AquAdvantage in the U.S. market: “Proper labeling ... will continue to be critical for customers. Alaska will continue to focus our efforts on what sets Alaska seafood and Alaska salmon apart ... a guarantee that the salmon they have purchased is wild, natural and sustainable.”