In writing the five-year 2018 farm bill, Congress could add new provisions to support aquaculture, with the added benefit of boosting soybean growers’ income, according to testimony at a Senate hearing Tuesday.

“Domestic farming of seafood, done in a safe, well-monitored manner, can provide economic opportunities for all Americans, both for our coastal and inland communities,” Committee Chair John Thune, R-S.D., said at the hearing.

Thune pointed out that thanks to its vast coastlines, the U.S. has the world’s largest Exclusive Economic Zone – a coastal area to which a country claims exclusive rights – yet he said the U.S. imports 90 percent of its seafood.

These imports create an annual $14 billion-dollar seafood trade deficit – and half of these imports are farmed, not wild caught. That means, Thune warned, that the imports are “farmed in other countries around the world where we have little control over the practices and conditions in which the seafood is grown or harvested.”

Thune said one answer is that “agricultural states like mine can play an important role in providing feed for fish farms, and everyone benefits from having increased domestic seafood production.”

AquaTech now expects to close on $60 million in private funding this February, earmarked for building a commercial-scale protein ingredient production facility in rural South Dakota. The new facility will process 30,000 tons of feed per year. 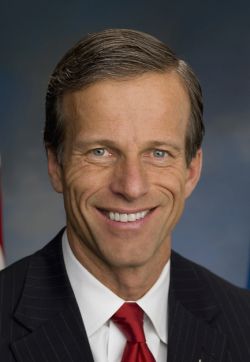 Echoing Thune, Luecke said, “Seafood remains one of our country’s highest trade deficits in the natural resource category, while aquaculture remains one of the fastest growing segments in agriculture outside the U.S.” He blamed aquaculture’s failure to thrive in the U.S. on a combination of the shortage of high quality U.S. fish feed, the shortage of investment capital to build fish production facilities, and “an inefficient regulatory pathway permitting fish production facilities.”

Pitching for increased federal support for aquaculture, Luecke told senators that “soybean farmers across many of your states have been searching for new and higher value uses of soybean meal given an increase in supply and global competition.” He said Prairie AquaTech’s proprietary process “opens a new global market for our soybean farmers by eliminating allergenic proteins and sugars in soybean meal that limit inclusion levels in aquaculture feed.”

When Thune asked “what would be the economic impact on soy-growing states if the U.S. were to embrace domestic aquaculture,” Luecke responded with attention-grabbing figures: “Today, soybean meal trades for about $300 a ton, whereas fish meal trades for between $1,500 and $1,600 per ton, so there is a significant spread between those two high-quality ingredients and it is something that our soybean farmers can actually take advantage of in the marketplace.”

Reacting to critics concerned about potential adverse environmental impacts from large-scale commercial fish farming, Luecke added an environmental reason for supporting aquaculture: using AquaTech’s fish food “increases phosphorus availability to the animal so that fish production facilities no longer discharge phosphorus into the surrounding environment.” He explained that “feeding local, plant-based protein ingredients that are 100 percent digestible to fish, which have the highest feed conversion rate of all animals, in an environmentally conscious manner – this is a major win for all constituents.”

Regenerative farming advocates hoping to have a say in the farm bill
Washington Week Ahead: Lawmakers hit the road to prepare for farm bill
Cracks widen in European farm support for EU’s Farm to Fork

Kelly Lucas, director of the Marine Aquaculture Center at the University of Southern Mississippi, highlighted another disconnect: the U.S. is a minor fish producer, yet a major exporter of fish feed, equipment and advanced technology. She said the result is that “the United States misses out on the opportunity to create jobs that generate wealth in our communities and provide safe, local, sustainable, seafood products.”

To fix the problem, Lucas called for “supporting aquaculture development by mechanisms similar to those used to support agriculture.”

Lucas and other witnesses also pointed out that the expanded use of fish-farm pens along the coasts could revive struggling fishing ports and make use of underused “coastal infrastructure such as boats, processing plants, seafood markets and working waterfronts.”

Lucas joined other witnesses in emphasizing that because of the need to feed a rapidly growing world population, it is important to recognize that fish convert feed to meat more efficiently than any land-based animal protein source such as cows, sheep, pigs or chickens.

Chef and author Barton Seaver, director of the Sustainable Seafood and Health Initiative Center at

Harvard’s School of Public Health, called for a cultural re-set: “I argue that just as we emotionally embrace farming the land, so must we embrace fisheries and aquaculture.”

“We need to look to the oceans for long-term food security,” Seaver said, pointing out that “More of America sits under the ocean than above it.”

Pointing out the vast potential for marine aquaculture, Seaver said a University of California report found that “in an area of the ocean the size of Lake Michigan that is ripe for aquaculture, we could sustainably farm fish equal to the amount of seafood currently caught globally in the wild today.”

Pointing to a major missed opportunity, Kent said “Our nation leads the world in the production of farmed products except for seafood.” He said the greatest obstacle to the U.S. becoming a significant source of farmed seafood is that the federal government’s failure to manage fish production in the country’s Exclusive Economic Zone “presents an almost insurmountable barrier to investors that would rather invest in farms in other countries and import the product into our markets.”

Kent called for federal action to provide “a consistent, predictable and efficient permitting process that will incentivize American investors into keeping their investment capital in this country to create a new paradigm for domestic seafood production, thereby leading to higher food security, lower transportation costs to our seafood supply chain, more American jobs, a larger tax base and greater utilization of our working waterfronts.”