Hold on there: House may rework new dairy program

The freshly overhauled income-support program for dairy producers could be in for still more changes before this year is out.

The top Democrat on the House Agriculture Committee, Rep. Collin Peterson of Minnesota, says the changes that senior Democrats in the Senate made to the Margin Protection Program as part of the newly enacted budget agreement will shortchange farmers, and he’s plotting a series of key revisions that would trigger bigger payments.

Peterson’s proposal, which he expects to be part of the draft farm bill that the House committee will consider in coming weeks, could set off a tussle with the Senate over the future of MPP.

“We’re going to fix that mess,” he told Agri-Pulse, referring to the newly enacted changes to MPP.

The top Democrats on the Senate Appropriations and Agriculture committees, Patrick Leahy of Vermont and Debbie Stabenow of Michigan, respectively, pushed to include the MPP revisions, which were aimed at making the program cheaper and more likely to trigger payments for small and mid-size operations. The Congressional Budget Office estimates the changes will increase the cost of the program by $47 million this year and $790 million through 2027.

The National Milk Producers Federation, which supports the revisions, recently appealed to Agriculture Secretary Sonny Perdue to implement them as soon as possible so that producers could sign up for the improved coverage.

But Peterson says his plan could actually provide bigger payments to producers - at slightly less cost to taxpayers.

MPP allows producers to protect themselves against drops in their margin, the difference between the price of milk and feed costs, at levels ranging from $4 to $8 per hundred pounds. Fees vary depending on the amount of production enrolled.

The newly revised program increased from 4 million to 5 million pounds the amount of production that could be covered at the lower, Tier I fees. (A farm with 220 cows would produce about 5 million pounds a year.)

The new law also removed the Tier I fees on coverage at the $4.50 and $5 levels and slashed the Tier I premiums by at least 40 percent to 70 percent at higher levels. Under the new law, the industry margins will be calculated monthly, rather than bimonthly, making it more likely that short-term dips in milk prices will trigger payments to farmers.

Peterson’s plan would Increase the margins that farmers can protect to $9 and $9.50 per hundred pounds, while reinstating the fees at the $4.50 and $5 levels to help offset the cost of trigger payments at the higher margins. Another cost-saving move would return MPP to bimonthly margin calculations.

The $9.50 margin could make a big difference in the frequency of producer payments.

A farmer who enrolled 5 million pounds of production in the newly revised MPP starting in April would pay $5,325 in MPP premiums this year but receive just $4,589 in payments, and most of that, $2,849 would be paid in April, according to an analysis by Scott Brown, an economist at the University of Missouri’s Food and Agricultural Policy Research Institute. There would be no payments after June under the new rules.

Under Peterson’s plan, the same farm would pay more in premiums, $8,625, from April through December, but would receive substantially more than that in payments, $38,475. In other words, the producer would receive $29,850 more in payments than he or she paid in fees.

The critical difference in the outcomes is this: Brown’s analysis projects that milk margins will be at a low of $7.32 per hundred pounds in April and then rise above $8 in July and eventually increase to $9.12 by October but never exceed $9.50.

In 2017, there were two periods when milk margins were below $9, March-April and May-June, according to USDA records. In 2016, margins were significantly lower, bottoming out at $5.76 during May and June of that year.

Peterson said that removing the fees on $4.50 and $5 coverage levels was “hugely expensive,” so his proposal reinstates them to offset the cost of protecting producers at margins above $8. 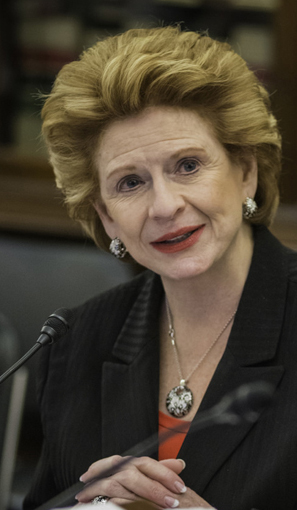 Stabenow “is focused on working with Leahy and the other Senate sponsors to ensure that the changes are implemented quickly and in a farmer-friendly manner,” according to the statement.

The statement also noted that the new law lifts a funding cap on livestock insurance policies, which are expected to appeal to larger operations.

The National Milk Producers Federation, which supports the new law, issued a statement that didn’t rule out supporting additional revisions by the House committee.

The group said it is “heartened by the opportunity to make additional changes to dairy policy. We have been in discussions with the committee and we look forward to reviewing the details of any further potential improvements to the dairy risk management safety net.”

Andrew Novakovic, a dairy economist at Cornell University, told Agri-Pulse that it remains to be seen whether Peterson can get sufficient support from Republican colleagues. “It may be hard to put higher fees back into Tier 1, even if it is just at the lowest levels,” he said, referring to the increases at lower coverage levels. But he noted that the new funding in the program that resulted from the budget law provides some “wiggle room” to make additional revisions.