The U.S. ethanol industry is fighting to maintain its record-setting growth despite the oil industry’s continuing attacks and the surge in global protectionism that threatens American exports of the corn-based biofuel.

Based on this impressive record, trade experts addressing the Renewable Fuels Association’s 23rd annual National Ethanol Conference last week forecast new records for 2018. But they also warned of serious challenges, including the need to boost exports to at least 1.7 b/g gallons this year. That’s because U.S. production is forecast to increase to 16.3 b/g for 2018 and limits on domestic use remain in place. 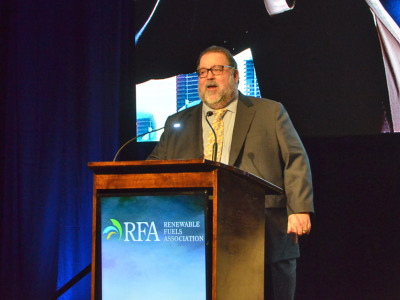 RFA President and CEO Bob Dinneen launched the conference by warning that after ethanol’s record exports in 2017, the U.S. now faces “a growing and troubling protectionist undercurrent that if left unchecked, threatens to undermine future growth in the world biofuels industry.” He added that “We will never build a dynamic and competitive biofuels trade on the back of tariff and non-tariff barriers.”

Dinneen specifically blasted the EU, China and Brazil for their protectionist policies. He called Europe’s 9 percent anti-dumping duty on U.S. ethanol “demonstrably illegal.” He said China’s 35 percent tariff – “an apparent effort to draw down its domestic grain surplus” – was “completely unjustified” and was causing “the immediate loss of the fastest growing U.S. export market,” and he labeled the Tariff Rate Quota recently imposed by Brazil “unreasonably low” and the 20 percent tariff on every gallon over quota “unreasonably high.”

Dinneen concluded that despite these new trade barriers, RFA is “optimistic that the tide of protectionism will soon ebb, and a new period of fair and free biofuels trade will create increased demand here and relief at the pump for those consumers currently being denied access to the lowest cost ethanol in the world.”

Daniel Whitley, the acting associate administrator for USDA’s Foreign Agricultural Service (FAS), told the conference his agency was “shocked” by Brazil’s “bogus, untimely, unfair” new tariff barriers. He called for the U.S. and Brazil, as the world’s top ethanol producers, to join in promoting free trade rather than creating new barriers. He said Agriculture Secretary Sonny Perdue and USDA are “dedicated” to re-opening Brazil and other markets to U.S. ethanol.

Whitley emphasized that with car ownership and fuel consumption stalled in the developed world but surging elsewhere, FAS is working overtime to increase ethanol exports to countries like China, India, Argentina, Colombia, Turkey and the Ukraine.

Matt Clausen, an ethanol trader with CHS Inc., pointed out that, despite China’s and India’s current barriers to U.S. ethanol, there may be some good news on the horizon. He noted that since both countries are planning national E10 (10 percent ethanol blend) mandates, China and India may have no alternative but to import the world’s lowest-cost, highest-octane ethanol from the U.S. to offset their production deficits. 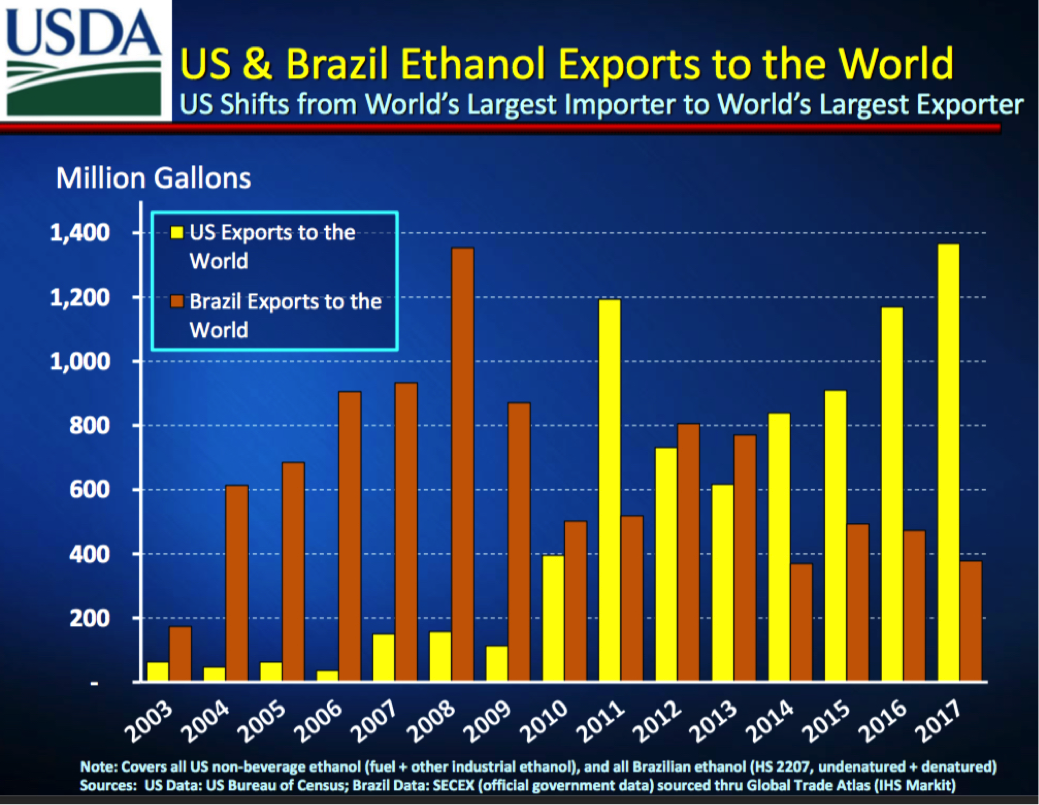 Based on the U.S. ethanol industry’s success, RFA General Counsel Ed Hubbard recommended a best-practices path for any country that wants to support its ethanol industry: “We believe that in order for a country to grow its domestic industry, it must have a strong and firm biofuels policy that establishes higher targets for ethanol blending but keeps its doors open to imports to help meet those blending targets. By doing so, these countries can help drive consumer acceptance for the fuel, help to drive infrastructure build-out, and help drive industry investment, all of which are key for a growing a domestic industry.”

Hubbard said the U.S. experience shows that “the most effective way to grow a biofuels industry is through a stable policy environment for ethanol that’s fed with a reliable supply of competitively priced ethanol made up of domestically produced volumes and supplemented by imports when needed.”

Duane Layton, a partner at Mayer Brown, a global legal services provider, predicted that the increasing protectionism around the world “is going to get worse before it gets better.”

Layton predicted that “if we whack” China again, by placing new restrictions on U.S. imports from the Asian nation, as the trade hawks advocate, China will launch a series of retaliatory measures likely to start with targeting U.S. soybean exports.

Jeremy Mall, director of business development at Murex, a trading and risk management company involved in marketing ethanol, warned that as protectionism spreads around the world, “Global producers who can’t compete on cost will look to alternative forms of protectionism.” He pointed to the case of Colombia using its new greenhouse gas emissions rules as a way to restrict imports of corn-based U.S. ethanol and protect its own sugarcane-based ethanol.