Anti-hunger activists have a clear message to the House and Senate Agriculture committees as they start writing the new farm bill: Don’t mess with the Supplemental Nutrition Assistance Program.

Arthur and the other 1,100 nutrition advocates and food bank leaders attending the conference carried that message to both sides of Capitol Hill this week. Among a list of talking points they carried with them was this: “Congress should protect SNAP from harmful policy proposals to alter its structure or cut its funding.”

The House Agriculture Committee is expected to mark up its version of the farm bill later in March just ahead of the Easter recess. Chairman Mike Conaway, R-Texas, has said little publicly about the nutrition title in the draft bill. But activists will be especially wary of attempts to cut eligibility, and they believe that it would be premature to tighten work requirements for SNAP recipients.

“We hope he (Conaway) is coming to the table with proposals that are constructive and will allow a farm bill to happen,” said Carrie Calvert, managing director of government relations for Feeding America, the network of food banks that co-sponsors the conference with the Food Research and Action Center.

“Generally, farm bills are passed down the middle of the aisle. It’s my belief that if he’s able to do so again it will be because he’s come up with policies that aren’t harmful to the people who are served by it,” she said.

Conaway knows he will likely need Democratic support to get the bill through the House, and that is the anti-hunger groups' ace in the hole. Conaway and his Senate counterpart, Pat Roberts, R-Kan., already face a compressed congressional calendar. After July, Congress will be in session for only a limited period before the November elections, leaving Conaway and Roberts little time to move their committee bills and then reach agreement on a final version.

On Monday at the conference, the top Democrat on the House Agriculture’s nutrition subcommittee, Jim McGovern of Massachusetts, called for defeating the panel’s bill if it is “cruel” to SNAP recipients, noting that Democrats could take over the House in November’s elections. 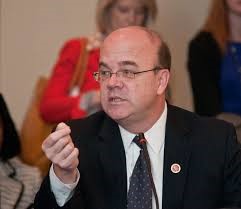 “I have a feeling that if we have a lousy farm bill, we’ll be in a position to write a better farm bill after November,” McGovern said.

The chairman of the nutrition subcommittee, Rep. Glenn Thompson, R-Pa., expresses confidence that anti-hunger groups will actually be “happy” with the House bill. In an interview with Agri-Pulse after speaking to the groups Tuesday morning, Thompson said that Conaway has committed to keeping any money saved from changes to SNAP within the nutrition title.

Specifically, Thompson said the draft bill would make it easier for members of the low-paid, entry-level members of the military to qualify for SNAP. The measure also could expand the Food Insecurity Nutrition Incentive (FINI) grant program to include dairy products and meat. The program, created by the 2014 farm bill, has been limited to fruits and vegetables, and is one of 39 expiring programs that currently have no funding after this year.

Speaking to the anti-hunger groups, Thompson denounced the Trump administration’s proposal to convert some cash SNAP benefits into food boxes that would be delivered to beneficiaries. On Monday, many conference attendees jeered when Brandon Lipps, USDA's acting deputy undersecretary for food and nutrition programs, defended the plan.

“It’s a bad idea, and it doesn’t deserve the attention” it is getting, Thompson said. He later told Agri-Pulse that he didn’t even support testing the plan with a pilot project, something Conaway said he was considering.

Among Thompson’s objections to the proposal is that the boxes would only include shelf-stable foods, including canned fruits and vegetables. “We need nutritional food, and that’s everything,” he said.