Lawmakers are starting hearings on the next farm bill at a time when the historically high commodity prices mean the public may see little need to beef up programs, even though input prices are also soaring.

At the same time, the cost of the Supplemental Nutrition Assistance Program also is increasing, which could make the program a target for House conservatives, as it has been during the development of the past two bills.

SNAP and funding for some smaller nutrition programs accounted for about 75% of the current farm bill’s estimated cost when the legislation passed in 2018. That share is likely to be even higher in 2023.

Some farm groups have started to wrestle with ways to augment existing commodity programs, but any changes that increase spending would likely have to be paid for with cuts in other areas of the farm bill.

There’s little sign that commodity prices will be coming down significantly in the coming year or so.

December corn futures are priced near or above $5 a bushel through 2025, evidence that the market expects prices to remain at an elevated level, said economist Dan Basse, president of Chicago-based AgResource Co.

Such an extended period of high prices “has never occurred in history prior to writing a new farm bill,” Basse told Agri-Pulse. “I suspect that that means status quo on revenue insurance programs for grain farmers.”

Basse argues that commodities have entered a “bull super-cycle.”

“World demand trends are rising faster than supplies,” he said. 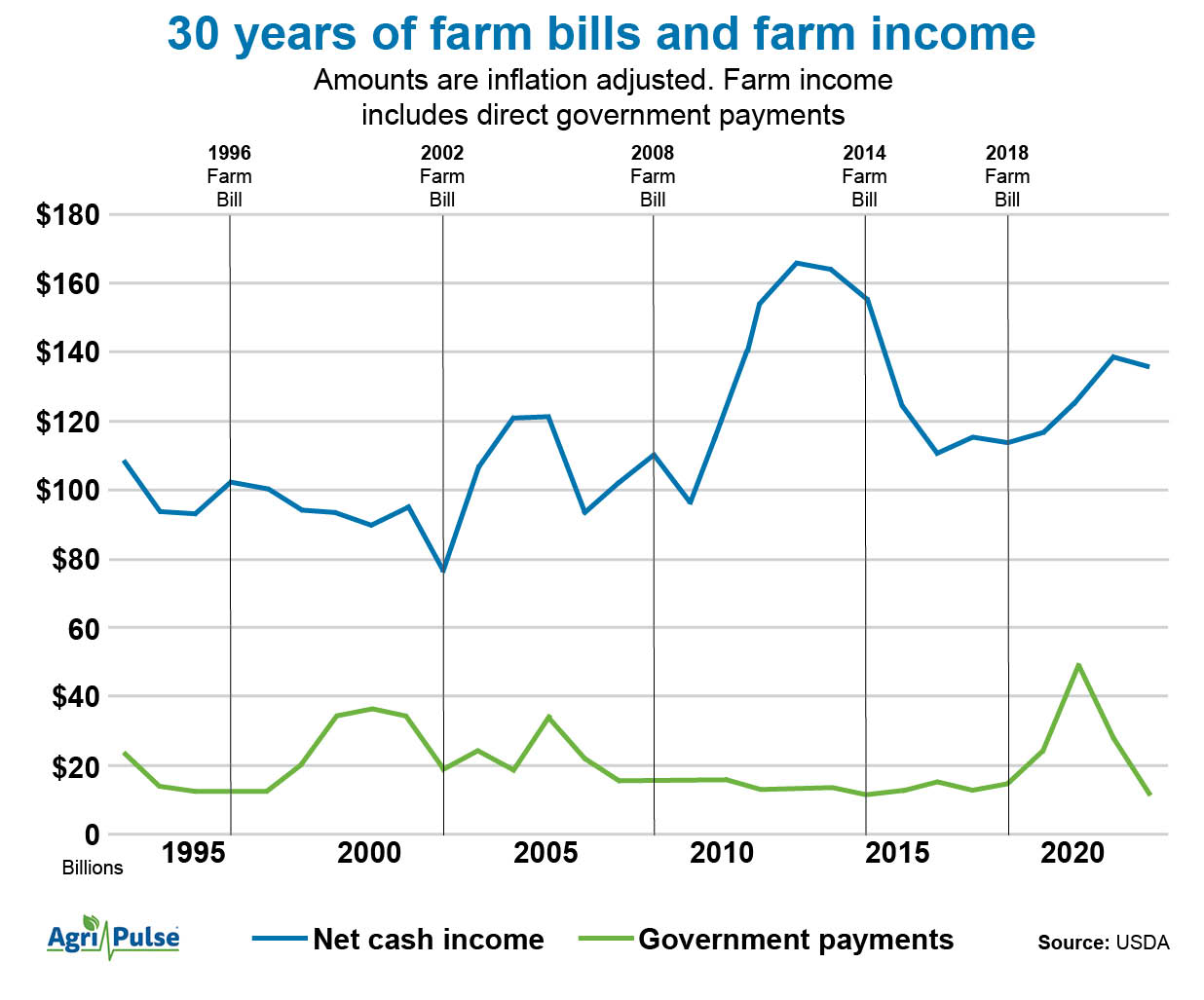 In early February, USDA projected net cash farm income will hit $136.1 billion this year, which would be the eighth-highest when adjusted for inflation in the past 50 years.

Since that USDA farm income forecast was issued last month, prices for wheat and other commodities surged even higher because of uncertainty about the impact of the Ukraine crisis on world grain and oilseed supplies. Chicago wheat futures rose from under $8 a bushel in early February to around $11 to $12 in recent trading.

Some farm group leaders say it’s not clear what impact the markets are going to have on farm bill deliberations. Organizations representing corn, wheat, soybeans and sorghum have delayed making decisions on farm bill policies until at least this summer.

“This thing is so fluid and so volatile and so, so contentious in many fronts that we're gonna need to just give this thing some time,” Chris Edgington, president of the National Corn Growers Association, said of the commodity markets.

It’s possible that prices have moved to a higher level, but he also expressed concern that a recession may be down the road, Edgington said in an interview on the sidelines of Commodity Classic, held last week in New Orleans.

The American Soybean Association has called for increasing the soybean reference price in the Price Loss Coverage program but notably stopped short of saying how much higher it should be. The PLC price for soybeans is $8.40 a bushel, which is roughly half of recent futures prices, but it is too low to cover the cost of production when market prices are depressed, the group argues.

The main farm bill commodity programs are triggering few if any payments to growers because of the price levels. The Congressional Budget Office’s most recent forecast of commodity program payments, issued last July when commodity prices were somewhat lower than they are now, projected only $838 million in payments from PLC in 2023, down from nearly $5 billion in 2021.

The second of the two major commodity programs, Agriculture Risk Coverage, was projected to pay out $43 million in 2023, down from $952 million in 2021.

The two programs, created in the 2014 farm bill in part to replace the fixed direct payments, have different structures and are designed to address different situations. PLC triggers payments when the average market price for a given year falls below the set reference price for a particular commodity.

ARC payments are triggered when county revenue for a commodity falls below the average for the previous five years, so ARC provides some protection for poor yields as well as falling prices.

Carl Zulauf, an economist at The Ohio State University, says ARC is the more important of the programs during a period of prolonged high prices because of its protection when prices decline sharply.

In a forthcoming paper, Zulauf and economists at the University of Illinois will argue for changing the farm bill slightly so that PLC or ARC alternatively kick in for farmers depending on how commodity markets are trending. The economists say the change would not affect the bill's cost.

Anti-hunger advocates face a different challenge heading into the farm bill discussions. During debates on the 2014 and 2018 bills, they fought off Republican efforts to cut SNAP enrollment and costs in part by tightening work requirements. Those efforts were mostly defeated, and instead the 2018 bill authorized a change that is increasing benefit levels.

The program is expected to cost more than $140 billion for fiscal 2022, which began last Oct. 1, more than double its annual cost before the pandemic. (In January 2020, CBO projected SNAP would cost just $61 billion in FY22.)

Much of the increase is due to increased participation as well as benefit increases authorized by Congress in March 2020 as the country started to shut down due to COVID-19.

But the Biden administration later authorized a permanent benefit increase as a result of the provision in the 2018 farm bill. The legislation called for updating the basket of foods, known as the Thrifty Food Plan, on which benefits are calculated. Starting Oct. 1, the average SNAP benefit rose from $4.20 per person per day to $5.39.

Anti-hunger advocates know they could be on the defensive again in the coming farm bill debate, but they’ll argue that cutting SNAP’s cost will require kicking people off the program or reducing benefits.

Some marker bills have been proposed to increase SNAP benefits. One by House Agriculture Committee Vice Chair Alma Adams, D-N.C., and Senate Agriculture Committee member Kirsten Gillibrand, D-N.Y., would increase benefits further by tying them to a more expensive benchmark than the Thrifty Food Plan, which they say is unrealistically low cost.

If there are GOP attempts to cut SNAP in 2023, commodity groups will face a challenge maintaining the traditional rural-urban coalition that has been necessary to pass farm bills.

At one point, the debate on the 2014 farm bill became so contentious because of House GOP attempts to cut SNAP that Republican leaders had to temporarily remove the nutrition title from the rest of the legislation.

“It will be vital that we keep that nutrition title tied to the farm bill if we want to keep that rural-urban coalition moving forward,” Chandler Goule, president of the National Association of Wheat Growers, told Agri-Pulse.