Coal productivity up, production down

03/07/18 11:58 AM By Sandra Cowherd
KEYWORDS appalachian coal EIA employment MSHA Powder River Basin
U.S. coal mining productivity increased 26 percent over the past five years, while the nation's operating mines have been cut nearly in half during the same period. Productivity reached 6.8 tons per miner-hour in 2017, up from 5.4 tons in 2012, according to the Energy Information Administration's Annual Coal Report and data from the Mine Safety and Health Administration (MSHA). Coal productivity varied significantly across production regions, with productivity in the Powder River Basin far exceeding productivity in the Interior and Appalachian regions.
Productivity has increased despite mine closings and declining employment and total production. Technology and process improvements have contributed to the increase in productivity, but a larger factor is the distribution of productivity across mines, EIA says. The mines that are first to close during market downturns are often the ones with higher production costs and lower productivity, while more productive mines remain operating, increasing overall productivity.
An estimated 547 mines of the 1,229 mines operating in 2012 were closed or idled by the end of 2017, a 45 percent decrease. Miner-hours worked declined 39 percent over the same period. U.S. coal production has also fallen, but to a lesser extent, decreasing from 1,016 million tons in 2012 to 774 million tons in 2017, a 24 percent drop.
During 2017, productivity ranged from 2.4 tons per miner-hour in Central and Southern Appalachia to 28.8 tons per miner-hour in the Powder River Basin (PRB). This wide range is a result of fundamental differences between the coal-producing regions, including the size of mines, coal seam geology, extraction technology, and coal types. 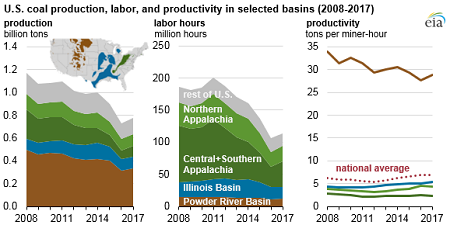 EIA reports lowest ever annual coal production
Manufacturers say DOE’s proposal would prop up unprofitable coal plants
In 2017, there were 610 producing mines in the Appalachian and Illinois basins, where coal was mostly produced from underground mines with average seam thicknesses of up to six feet. PRB has only 16 mines, but those mines produced 43 percent of the U.S. total in 2017. PRB mines are very large surface mines with average seam thickness of 65 feet, allowing for the use of larger mining equipment and resulting in greater productivity.
Although Appalachian and Interior coal basins are less productive than those in PRB, Appalachian and Interior coals have other advantages. The coal produced in Appalachian and Interior basins has higher energy content, and the mines are located closer to many of the power plants and industrial facilities that consume coal.
After several years of declines, coal production and employment increased in 2017. According to data from MSHA, coal production in 2017 increased by an estimated 6 percent, and total labor hours rose by 7 percent from 2016 levels. These increases were driven in part by the stabilizing financial condition of producers that had been in bankruptcy proceedings during 2016 and by increasing export demand.