The Department of Interior (DOI) will disburse almost $188 million to Gulf oil and gas producing states of Alabama, Louisiana, Mississippi and Texas. This payment is the first under Phase II of the Gulf of Mexico Energy Security Act of 2006 (GOMESA). The amount is over five times more than the total amount disbursed to states and coastal political subdivisions during the entirety of Phase I of GOMESA, from 2009 to 2017.

“Offshore energy production means less oil needed from foreign countries and more jobs for the American people. This $188 million will be dedicated to coastal restoration and other projects important to many communities in the Gulf,” said Interior Secretary Ryan Zinke.

The funds are derived from oil and gas leasing revenues on the Outer Continental Shelf (OCS), and disbursed in accordance with the revenue-sharing provisions of the GOMESA legislation. Approximately $37 million was shared by states and coastal political subdivisions in Phase I. DOI attributed the increase in disbursements to an increase in leases included under Phase II.

But many credit former Louisiana Sen. Mary Landrieu for the increased OCS funds to Gulf States. Former Chair of the Senate Committee on Energy and Natural Resources, Landrieu spearheaded GOMESA and testified before the House Energy and Mineral Resources Subcommittee on the subject just hours before the disbursement announcement was made.

“We’re here to ask for our fair share. GOMESA was the right first step," Landrieu said, but added that there was "an arbitrary cap" of $375 million placed on the funding.

But needed repairs have topped $8 billion in the state of Louisiana alone. According to the Coastal Protection and Restoration Authority (CPRA), Louisiana has lost nearly 1,900 square miles of land since the 1930s, and is on track to lose more than 4,000 additional square miles in the next 50 years. Fuel extraction, compounded by catastrophic hurricanes, is responsible for much of the destruction. 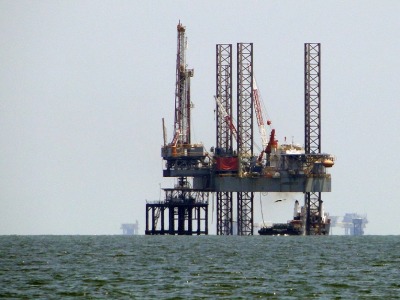 “So here we sit, holding the damage in our hands," Landrieu testified. "This was not caused by us, the people there in the state. And this was on full display and witnessed for Katrina, Rita and the devastation.”

“This ecosystem is in critical condition, disappearing at an alarming rate. Indeed, the marshlands are subsiding into the gulf at rates of up to a football field an hour. Decisions made today will directly determine the future of coastal Louisiana and the rest of the nation,” said committee chairman Paul Gosar, R-Ariz.

While the terms of GOMESA allow distributed funds to be spent on any state venture, Louisiana passed legislation allocating 100 percent of the oil revenue shares to coastal restoration. The state of Louisiana will receive over $82 million in the first disbursement to begin work on 124 urgent restoration projects. Those projects are designed to rebuild marshlands and maintain the area as the energy and import hub of the U.S.

“This revenue stream is one we have planned our coastal program around, and we are happy to finally be able to put it to use to help address our land loss crisis," Louisiana Gov. John Bel Edwards said in a statement. "A healthy coast is absolutely essential to a healthy oil and gas industry in Louisiana, as well as our economy overall. The dedication of these funds to address our coastal issues is the smartest investment we can make.”

CPRA’s master plan includes flood protection, ecosystem restoration, tourism development and commercial ventures. The other Gulf States plan to use GOMESA funds to strengthen and rebuild their coastlines as well. Coastal conservation is planned for Mississippi. Texas will use monies to rehabilitate 240 miles of its coastline impacted by Hurricane Harvey. Coastal infrastructure projects are on tap for Alabama.