Branstad hopeful for resolution to US-China dispute, but won’t accept ‘crumbs’ to end it

The top American official in the People’s Republic of China says many of its citizens might admit to the American trade grievances at the heart of a budding trade war.

Terry Branstad, the longest serving governor in U.S. history who now serves as U.S. ambassador to China, told Agri-Pulse and other journalists in Beijing on Monday that China can’t possibly be surprised that another country would offer criticisms on policies that could create an unfair trade arena.

President Donald Trump has levied tariffs against $50 billion worth of Chinese goods, citing “China’s theft of intellectual property and technology and its other unfair trade practices.” When China issued retaliatory tariffs, Trump threatened to apply another $200 billion in duties just for good measure.

Despite the back and forth, Trump told Branstad in the Oval Office last week that “he does want to get this resolved,” the ambassador said. But that doesn’t mean the president who prides himself on deal-making will allow himself to be sold short, either.

“I’ve tried to explain to the Chinese that this new administration is not as patient as America has been in the past,” said Branstad, who served as governor of Iowa for 21 years. China, he added, hasn’t brought a good enough deal to the table to entertain U.S. interest.

“The (U.S.) administration is not willing to accept a few crumbs, they want to see some really fundamental change that occurs in the near future and not three or five years from now,” he said. 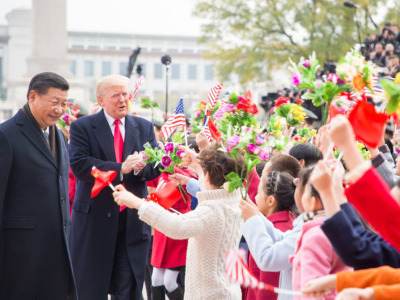 But there’s a palpable sense of concern from U.S. officials that China could simply play the long game on the trade dispute, a luxury that might not be there for Americans at the negotiating table. Trump will have to run for reelection in 2020; Chinese President Xi Jinping was just successful in eliminating term limits from his nation’s constitution. Should this turn into a long-term fight, that could play into the hands of the Chinese.

“They believe that that their political system is strong enough and more resilient and can withstand the pain of a protracted trade war a lot more than our political system,” a well-placed U.S. official said.

What’s more, Chinese retaliation could also take the form of actions other than tariffs. Since the U.S. imports far more from China than vice versa, the Chinese government could resort to more creative forms of trade retaliation in the event the most impactful products are already facing a tariff. A Beijing-based official is concerned that’s exactly what could happen.

“One of the things that the Chinese are very, very good at is not the above board tit-for-tat, it’s the shivving us under the table without their fingerprints on it,” the official said. “They have a whole slew of fire inspections, health inspections, you name it – ways that they can inflict pain on our companies when they run out of tariffs.”

When a government feels empowered to act, as one source put it, “above the law,” that could make things very tricky for those on the other end. In this case, the victims could very well be American producers looking to maintain market access in the world's most populous nation and one of the most prized destinations in the world.

For evidence of what could be at stake, U.S. exporters need look no further than to the nearest feedlot. A 2003 bovine spongiform encephalopathy scare caused a 13-year hiatus for U.S. beef on Chinese grocery shelves. That product made its return about a year ago, but sales have not yet been the exponential success story the U.S. beef industry had hoped for.

Obviously, the comparison of trade battle and disease scare is not a perfect one, but the impacts of changing suppliers for any reason at all could prove long-lasting. In the case of U.S. soybeans, China could become more reliant on the Brazilian market or even try to develop increased production elsewhere in the world.

Asked about the possibility of long-term impacts of the current trade spat, Branstad said it would be “very detrimental to both our countries and the whole world economy if that were the case,” so he hopes two of the most powerful men in the world can see their way to calming trade tensions.

“I think the chemistry between the two leaders – between President Trump and President Xi Jinping – is good,” Branstad said. “That’s why I’m hopeful that eventually this can get resolved.”