President Donald Trump has picked Brett Kavanaugh, a judge on the D.C. Circuit Court of Appeals for 12 years, as his nominee to replace retiring Justice Anthony Kennedy on the Supreme Court.

In a brief televised announcement from the East Room of the White House, Trump said Kavanaugh is "universally regarded as one of the finest, sharpest legal minds of our time." Trump also said Kavanaugh had a "proven commitment to equal justice under the law."

Kavanaugh himself told the White House audience -- and millions more who were tuned in -- that "I will always strive to preserve the Constitution of the United States and the rule of law."

The National Cattlemen's Beef Association was first out of the gate among farm groups with reaction. Environmental counsel Scott Yager said that the nomination "presents an opportunity to solidify the conservative tilt of the U.S. Supreme Court. The retiring Justice Kennedy was long considered a ‘swing vote’ – he voted with the liberal wing of the Court almost as many times as he sided with the conservative justices."

A veteran of the George W. Bush administration before going on to become a judge on what is considered the second most powerful court after the Supreme Court, Kavanaugh has a long track record, writing more than 300 opinions at the appeals court.

Kavanaugh is seen as a reliably conservative voice who "has largely, but not always, attempted to rein in Obama-era EPA regulations," SCOTUSBlog's Edith Roberts wrote in a recent profile of the nominee. 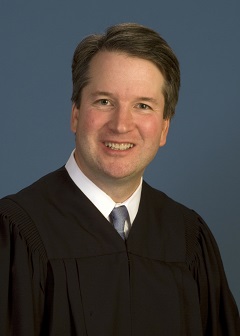 He "will bring extensive experience to the Supreme Court; his long career exemplifies public service and, in particular, dedication to religious liberty. He has shown that Constitutional principles are the ultimate guide for his opinions,” said House Speaker Paul Ryan.

Utah Sen. Mike Lee, who is on a list of Trump’s possible Supreme Court nominees, said he knows Kavanaugh “to be a smart and fair judge, one of the most admired appellate judges in the country.”

Senate Judiciary Chairman Chuck Grassley, R-Iowa., said Kavanaugh "is one of the most qualified Supreme Court nominees to come before the Senate. His credentials are well known, and he’s served with distinction as a judge on the esteemed D.C. Circuit for more than a decade. He is a superb mainstream candidate worthy of the Senate’s consideration.”

The judge is expected to provide a necessary vote to overturn the Obama administration’s “waters of the United States” rule defining the scope of waters and wetlands covered by the Clean Water Act. The rule is currently enjoined in more than two dozen states and is in the process of being repealed and replaced by the Trump administration.

Pat Parenteau, a law professor and environmental law expert at Vermont Law School, said he expected Kavanaugh would “vote against the 2015 (WOTUS) rule.”

Parenteau noted that Kavanaugh clerked for Justice Kennedy, "so he might show some respect for (Kennedy's) concurring opinion in Rapanos, but he’d probably greatly narrow the scope of waters that would qualify under the significant nexus test,” Parenteau said.

In his concurring opinion in the 2006 Rapanos decision, Kennedy said that EPA and the Corps of Engineers needed to provide substantial evidence of "a significant nexus between the wetlands in question and navigable waters in the traditional sense" in order to assert regulatory jurisdiction.

But Parenteau also said that Kavanaugh is "not the kind of conservative who would simply rubber stamp whatever the Trump administration sends him. He has enough intellectual integrity to scrutinize the record and not be impressed with a poorly reasoned alternative rule that is not supported by the science and the considerable body of law that has developed under the (Clean Water Act) over four decades.”

One lawyer for a Washington trade group said that Kavanaugh "seems like a good conservative judge, but with 12 years of opinions on the D.C. Circuit, he will have done something to offend most everyone." Kavanaugh agreed with the position taken by opponents of EPA's greenhouse gas rule that the agency had overreached when it used the Clean Air Act to regulate greenhouse gases. But he also ruled for EPA and the Corps in a Clean Water Act case involving the regulation of mountaintop mining operations.

What does Kavanaugh’s addition to the Supreme Court mean for ag?
Senate on verge of confirming Kavanaugh for high court

Kavanaugh wrote an opinion last year in which he said EPA was wrong in how it interpreted “inadequate domestic supply” in the Renewable Fuel Standard when decreasing required renewable fuel blending. He wrote that "whether a thing is ‘available’ to someone has nothing to do with whether he or she decides to use it.” The decision was a victory  for the American Coalition for Ethanol, which had sued EPA.

"The fact that a person is on a diet does not mean that there is an inadequate supply of food in the refrigerator," Kavanaugh wrote. "So too here: Whether there is an adequate amount of renewable fuel available to allow refiners, blenders, and importers to meet the statutory volume requirements has little to do with how much renewable fuel that refiners, blenders, and importers – much less consumers at the pump – ultimately decide to use.”

In another ag-related case, Kavanaugh issued a concurring opinion in a unanimous 2014 decision by the full D.C. Circuit Court of Appeals upholding USDA’s 2013 country of origin labeling (COOL) rule. The decision was blasted by meat manufacturers and processors, as well as the National Cattlemen’s Beef Association, but praised by groups such as the U.S. Cattlemen’s Association and R-CALF USA.

Congress scrapped COOL in December 2015 after an unfavorable ruling in the World Trade Organization the year before.

In her profile of the jurist, SCOTUSBlog’s Roberts wrote that Kavanaugh, while “clearly inclined to resist the expansion of administrative-agency authority,” has nevertheless “tended to approach administrative law issues on a case-by-case basis, rather than by mounting a frontal attack on the doctrine of deference to agency interpretations of ambiguous statutes famously set forth in Chevron v. National Resources Defense Council.”

But Roberts also wrote that Kavanaugh has been “developing his own method of empowering courts to hold the line against the administrative state, through what Kavanaugh refers to as the ‘major rules doctrine.’”

“To Kavanaugh, if Congress has not spoken on a matter of deep economic and political significance, which it had not in this instance, a regulation challenged under the relevant statute is presumed to be invalid,” she wrote.

Kavanaugh could face some confirmation troubles. The New York Times reported that Senate Majority Leader Mitch McConnell told Trump he was concerned about Kavanaugh's confirmation prospects because of his views on impeachment. Kavanaugh was an author of the Starr report, the product of the investigation into then-President Bill Clinton that was sent to Congress in September 1998.

That report included a list of possible grounds for impeachment, including lying to aides and to the American public.

But Kavanaugh's views have changed over the years. In a 2008 article in the Minnesota Law Review, he wrote that he used to think, in the 1980s and ‘90s, that presidents “should be required to shoulder the same obligations that we all carry.” But looking back, “that seems a mistake.” Instead, he had come to believe that presidents “should be excused from some of the burdens of ordinary citizenship while serving in office.”

Specifically, he recommended that Congress “enact a statute providing that any personal civil suits against presidents, like certain members of the military, be deferred while the President is in office.”

In addition, “Congress might consider a law exempting a president – while in office – from criminal prosecution and investigation, including from questioning by criminal prosecutors or defense counsel.”

Philip Brasher contributed to this story.