To consumers trying to get their heads around what’s good or bad about the new crop and animal gene-editing techniques, and to scientists and farm policy stalwarts racing to stay abreast of that frontier in biotechnology, a task force of scientists with the Council for Agricultural Science and Technology (CAST) this week offered a comprehensive update.

The report's authors made every effort to be “factual, not speculative, and . . . provide insights but not opinions,” Adam Bogdanove, a Cornell University plant scientist who headed the task force, said at a presentation of the report. To ensure such a result, he said, the CAST group was formed of “people who feel strongly” but hold varied and divergent views on gene editing. “That way we were able to sort of expunge the (slanted) language from the paper,” he said.

Still, the report encourages future use of gene editing in agriculture. While it wades through the complexities of controversies around the techniques, it also summarizes the technology thusly: “Genome editing is a powerful new method that enables unprecedented control over genetic material and offers the opportunity to make rapid advances in basic and applied biology.”

The report says the demands for improved genetics to foster animal health and crop production are great, and Bogdanove declared, “We have a backlog of genes just crying out to be edited." However, he said, “the jury's out still on how the public will view genome editing."

The report’s 18 pages (plus research citings) cover the waterfront. They describe the types and tools of gene editing, compare gene editing with other types of genetic modification (see table), and summarize the varied and conflicting ways that the U.S. and other nations are approaching regulation. The report also describes scientists’ and the public’s views along with the dilemma of achieving coherent public policies on gene editing, and discusses the outlook for future adoption on the farm. 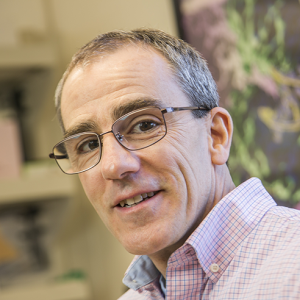 Gene editing can be defined in as little as seven words: Making targeted genetic changes to an organism.

“But unlike conventional breeding,” the report says, “genome editing requires delivery of reagents into cells” in making what’s called “site-directed nuclease” (SDN) modifications. The reagents – such as bits of RNA and nucleases (enzymes) – are the tools  that researchers use to cut the double strands of DNA in chromosomes and thus delete genes or paste new ones within a cell nucleus.

Meanwhile, the editing toolbox is expanding quickly. Indeed, while news stories about advances in the techniques have dwelt largely on just two processes – TALENs (transcription activator-like effector nucleases) and CRISPR/Cas9 – the report describes an array of emerging cut-and-paste processes and techniques. It subdivides the main gene editing methods into three categories of SDN changes, based in part on degree of complexity. Also new, for example, is a version of the Cas9 process called “base editing.” In a process nicknamed “dead Cas9,” the tool that severs the DNA to make an edit is partially deactivated, and thus the process does its genetic modification without even severing both DNA strands at the editing site.

Why the rapid growth in new editing techniques?

Bogdanove’s perspective: “In the ever expanding tools and approaches that are getting lumped into this topic of gene editing . . . the competition for intellectual property is driving discovery.” After describing yet another gene editing technique, he suggests, “tomorrow there may be a completely different system that’s even easier to use.”

At the interface of the technology with public policy and regulation, one crucial question has been whether scientists can even tell whether editing was used, thus making the policing of the technique possible. The question arises because the genetic material added or altered is within the same cell, or from within the same species, and the reagents used to make the edits are typically bred back out of the cells.

CAST concludes: “In terms of identification, however, it is not possible to distinguish the types of modifications made by (the principal current gene editing methods) from variants that might derive from conventional breeding techniques or exist because of natural genetic variation.”

The report points out that, in large part because an edited genome may be most often indistinguishable from one altered in nature, European Union officials are leaning toward the U.S. Department of Agriculture’s intent to leave gene editing unregulated when it does not involve transgenic changes (transferring genes between species).

That approach eases the regulatory burden and may assist in finding a workable editing policy. But it surely doesn’t settle the matter. 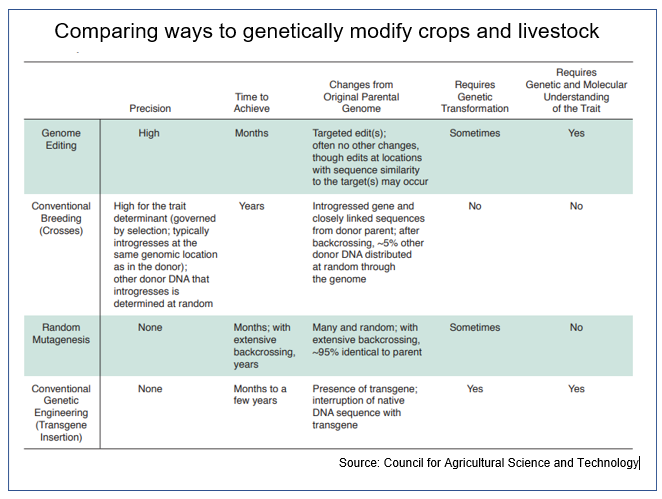 While the CAST report looks to “successful deployment of genome editing” that is “science-informed (and) . . . promotes both innovation and transparency,” it also points to a long road of “sociocultural factors that inﬂuence risk perception and technological acceptance at the national, group, and individual levels.”

American farm groups are still mulling over the report, but Daniel Kovich, director of science and technology for the National Pork Producers Council, complimented CAST for highlighting “the need for rational and risk-based regulation of gene editing. He said the report “concisely summarizes the applications of this technology to animal health challenges facing livestock producers – challenges that would be costly in terms of time and genetic progress to address through conventional breeding programs.” Also, he said, the report “offers compelling evidence as to how precise – and therefore safe and accurate –  gene editing has become.”