Trump administration officials have been promising for months that Sonny Perdue’s Agriculture Department will protect farmers and ranchers from billions of dollars of tariffs imposed by China, Mexico, Canada and the EU. Perdue has made the same promises, but in recent days he’s begun walking back a timeline for that protection and trying to lower expectations of just how much USDA can help insulate producers from the mounting import tariffs on U.S. grain, oilseeds, meat, seafood, dairy, tree nuts, fruits and vegetables.

“President Trump has told me to assure the agricultural community across the country that he will protect them and they will not bear the brunt of the ag trade disruptions, and he will do exactly that,” Perdue said July 2 in a televised interview on an NBC affiliate in Spokane, Wash. Perdue also vowed to have a tariff “mitigation” program up and running by Labor Day that would compensate producers for their losses.

But providing that kind of protection is a daunting task that will require access to a lot of money and a means to distribute relief to everyone from walnut farmers in California to pork producers in Iowa. The enormity of the task may have also caused Perdue to rethink the timeline for the program.

The day after the NBC interview, Perdue told a gathering of American Farm Bureau Federation members that it may take longer.

“That Labor Day (deadline) was self-imposed by me,” Perdue said. “We don’t – I don’t want to be held to it necessarily.”

He also warned that he doesn’t want people to think that USDA’s mitigation will completely protect producers from the effects of the new tariffs.

China announced last Friday it was hitting the U.S. with tariffs on $34 billion worth of mostly agricultural products – everything from soybeans to cucumbers – in retaliation for U.S. tariffs meant to punish the country for the theft of intellectual property. That’s on top of the retaliation for new U.S. steel and aluminum tariffs, which Mexico, Canada and the EU are also retaliating against.

The Trump administration on Tuesday evening announced that it is preparing to hit China with new tariffs on an additional $200 billion of goods.

“I don’t want to leave the impression that mitigation is going to leave people whole,” Perdue told the gathering of Farm Bureau members last week. “I don’t know that’s the expectation I want to leave here because that’s difficult to accomplish.”

But any program of the magnitude being promised by the Trump administration will be difficult, and details are being closely-held. Several high-level officials tell Agri-Pulse that they have no idea how Perdue hopes to manage it because producer groups have not been consulted.

“We don’t know how this would be implemented,” said Kent Bacus, international trade director at the National Cattlemen’s Beef Association. “We don’t know when.”

USDA spokespersons have refused to comment when asked for details of the mitigation program, but Perdue revealed at least part of the plan last week when he was pressed by Mark Powers, president of the Northwest Horticultural Council.

“We’re scratching our head as to how that might work,” Powers said.

Perdue's partial answer was that USDA was going to start relying more heavily on Section 32 of the Agricultural Adjustment Act Amendment of 1935, which allows USDA to take money from customs duties and use it for a wide variety of things like disaster payments and purchasing surplus commodities.

“We have used Section 32 money, which allows us to buy products that are in high supply and low-price areas, to provide food banks and school nutrition programs to take these things off the market to support prices,” Perdue said. “We’ll continue to look at that … aggressively in this period of time when we’re seeing these tariffs imposed.” 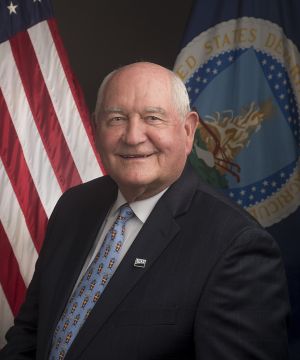 The USDA’s Agricultural Marketing Service used Section 32 and other authorities to buy about $2.2 billion worth of plums, pasta, apples, rice, carrots, peaches, beef, raisins, eggs and many more products in fiscal year 2017. That’s slightly less than the $2.6 billion of food it bought in FY 2016.

Because USDA’s purchase authority under Section 32 is tied to customs receipts, the billions of dollars in new tariffs being levied by the administration will likely boost the funds available, but its unclear by how much.

The problem with Section 32, says Bob Young, president of Agricultural Prospects and former chief economist for the American Farm Bureau Federation, is that once USDA has purchased the commodities, it has to either store them or distribute them in a way that does not impact the domestic market. That’s a much easier problem to deal with for a product like cherries, which can go to food banks or nutrition programs. Bulk commodities like soybeans, wheat and corn present a much bigger problem.

“Once you’ve got it, what do you do with it?” Young said.

Joe Glauber, senior research fellow at the International Food Policy Research Institute and a former USDA chief economist, agrees that would be a problem.

“With soybeans you would have to hold them in stockpiles - something I doubt very seriously is being contemplated,” he told Agri-Pulse.

USDA also has access to billions of dollars as the sole proprietor of the Commodity Credit Corporation (CCC), which has broad authority to dole out money for loans, payments and commodity purchases.

The CCC Charter Act says USDA can use up to $30 billion per year to “support the prices of agricultural commodities (other than tobacco) through loans, purchases, payments, and other operations.”

The ability to just write checks to farmers and ranchers would solve the problem of storing bulk commodities, but it’s unclear if USDA would have the authority to compensate a farmer because a Chinese importer canceled a purchase rather than pay the new 25 percent tariff, said Glauber.

“I believe (the Office of Management and Budget) would have to approve the use of funds, but the authorities are quite broad,” Glauber said. “The question is whether USDA could make cash payments to producers under the Charter Act … Giving cash payments to farmers wouldn't support prices but obviously would compensate for income drops.”

Even if USDA does figure out a system to compensate all of the farmers and ranchers for damage under the administration’s trade conflicts, producers are not likely to be happy about it.