The biannual attempt by Republican lawmakers to rewrite the Endangered Species Act is in full swing, exemplified by a Senate hearing Tuesday on draft legislation that would give states a greater say in how the law is implemented.

Environment and Public Works Chairman John Barrasso, R-Wyo., said his draft bill is based on recommendations from the Western Governors' Association. In a letter to Barrasso, the WGA said the draft bill offers “meaningful, bipartisan solutions to challenging species conservation issues.”

But the letter, signed by Republican Gov. Dennis Daugaard of South Dakota and Democratic Gov. David Ige of Hawaii, also said each of the 19 governors in the WGA “reserves judgment on whether to continue supporting this bill as it moves through the legislative process.”

Sen. Chris Van Hollen, D-Md., said at the hearing he had not heard from any Democratic governors supporting the draft legislation.

But Wyoming Gov. Matt Mead, a Republican who led a WGA effort to come up with recommendations for ESA reform, told the committee, “I would not make the assumption that Democratic governors would not support the working draft.”

Agricultural groups support Barrasso’s effort overwhelmingly. The National Cattlemen’s Beef Association on Tuesday said it was starting a media campaign to publicize the senator’s draft bill, and more than 100 farm and other organizations, including the American Farm Bureau Federation and the Independent Petroleum Association of America, have endorsed it.

But there is also ample opposition. Sixty-four conservation groups sent a letter to Barrasso and EPW Ranking Member Tom Carper of Delaware criticizing the draft bill for “seek(ing) to impose state control over the most important processes to list, protect, and recover imperiled species under the ESA – even though states already have broad opportunities to engage in the ESA process.”

The bill would ensure that federal representatives on species recovery teams not outnumber state and local representatives. It also would allow states to lead recovery efforts; currently, either the Fish and Wildlife Service or National Marine Fisheries Service has that responsibility, depending on the species. 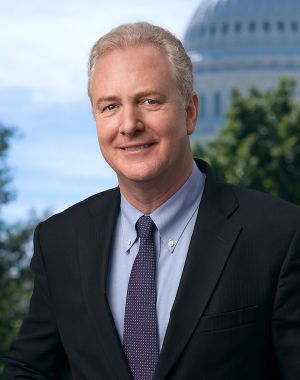 In another change to recovery provisions in the ESA, the bill would only allow changes to species recovery plans on the unanimous vote of recovery team members, and prohibit lawsuits challenging downlisting or delisting decisions for five years after the species’ status has changed.

One provision that had Van Hollen steamed would require the Fish and Wildlife Service to solicit feedback from the states each year on the performance of FWS employees. “The feedback shall reflect the responsiveness of the (FWS) to representatives of state and local government and stakeholders who reside in the state,” according to an EPW summary of the bill.

Van Hollen questioned why states should be given a “cudgel” to punish federal employees, some of whom have received death threats for their work on endangered species. Mead told Van Hollen he would not agree with a requirement that federal employees be allowed to provide feedback on their state counterparts.

Given the near-unanimous opposition to the bill by environmental groups and the lack of working days left on the Senate’s calendar, Barrasso’s bill would appear to face an uphill climb. Mary Beth Beetham, legislative director of Defenders of Wildlife, answered “No” when asked after the hearing whether she thought the bill has a chance of passing.

“There was a lot more concern expressed about the bill than support” at the hearing, she said. Democratic Senators Cory Booker of New Jersey, Tammy Duckworth of Illinois, Ed Markey of Massachusetts, Van Hollen and Carper all voiced doubts about the Barrasso legislation.

Also on the ESA front, environmental groups and Democratic lawmakers are urging a House-Senate conference committee negotiating a defense authorization bill to remove provisions that would prohibit FWS from listing the greater sage-grouse or the lesser prairie chicken under the ESA for 10 years. Another provision would delist the American burying beetle, an endangered species whose range has been reduced from 35 states to just four: Rhode Island, Oklahoma, Arkansas, and Nebraska. The beetle has been on the endangered species list for nearly 30 years.