Wheeler: RFS changes will need to move as a package

Andrew Wheeler, the acting administrator of the Environmental Protection Agency charged with bringing some resolution to the ongoing renewable fuels policy debate, says the agency will not move piecemeal reform to the nation’s biofuel mandate.

The comment is a setback for biofuel groups hoping to secure a Reid Vapor Pressure waiver that would allow summer E15 sales without having to offer anything in return to the oil industry. An RVP waiver was nearly secured in June, but the renewable fuels industry and its supporters on Capitol Hill balked at the requirement to offer up the ability to allow exported biofuels to generate compliance credits - Renewable Identification Numbers - under the Renewable Fuel Standard.

Now, Wheeler says the two sides will need to reach an agreement, because he won’t implement something that was included in that pact as a standalone proposal.

“We’re not going to implement piecemeal parts of that deal,” Wheeler told reporters Tuesday in his Washington office. “I don’t want to just implement part of a broader deal that fell apart, but I’m looking to see what else we can do.

“Maybe there’s other things to put into the mix,” he added. “What I’m doing at this point is talking to a wide variety of different groups to see what their concerns are.”

While Wheeler may have signaled opposition to moving the RVP waiver by itself, he said he isn’t opposed to the principle, even going so far as to say it is a technical correction to the Clean Air Act that could be handled on Capitol Hill. 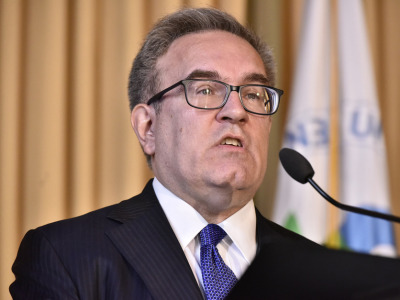 Wheeler has replaced former EPA Administrator Scott Pruitt, who resigned from the post earlier this month.

Wheeler also discussed the agency’s handling of small refiner exemptions, saying with RIN prices lower in 2018, RFS compliance costs should be reduced, and “it would stand to reason that there would be less economic impact to the small refiners.”

However, he pointed to a series of legal decisions decrying the Obama administration for how its EPA addressed the waivers and said the exemption process will remain on the books.

Bigger trade package seen as a 'bridge' to better times
Cruz wants a meeting on the RFS, but will it happen?

“We’re not changing how the program operates at this point,” he said, but noted a goal of increased transparency about how the waiver process works. “We need to be able to explain to anybody who is concerned about this, what are the decisions we’re making, why are we making them, how we’re making them.”

Asked if increased transparency included plans to disclose waiver recipients, Wheeler said EPA will have to abide by concerns on distributing confidential business information, but “to the extent that we can provide more information like that, we certainly want to.”

Biofuel groups were frustrated when the 2019 Renewable Volume Obligation proposal was released in June without language discussing how the agency planned to reallocate waived gallons. Wheeler said the agency is “looking at both the letter of the law and the spirit of the law,” noting congressional intent of a 15 billion gallon conventional RVO.

The remarks came prior to an event announcing sorghum oil pathways under the RFS, a move widely cheered by biofuels groups. Growth Energy CEO Emily Skor called the decision “long overdue and very welcome news,” while Renewable Fuels Association President and CEO Bob Dinneen said sorghum oil “will be a welcome addition to the market and will provide further flexibility in the marketplace for RFS compliance.”

National Sorghum Producers CEO Tim Lust tells Agri-Pulse the move could have an impact of about 20 cents per bushel of sorghum, a welcome boost to one of the first commodities hit by trade issues.

“Without this, we had a number of plants who had just quit using and quit buying sorghum,” he said. “From that standpoint, this is huge.”