Home » Cruz wants a meeting on the RFS, but will it happen?
Environment News Politics Energy

Cruz wants a meeting on the RFS, but will it happen?

Senator Ted Cruz has gotten headlines for placing a hold on Bill Northey’s USDA undersecretary nomination, but the Texas Republican hasn’t gotten what he really wants: a meeting at the White House and substantive changes in renewable fuel policy.

The hold was placed after EPA Administrator Scott Pruitt offered a list of assurances – including rejecting a proposed RFS point of obligation change and a pledge to increase biofuel blending requirements – to Midwestern senators that allowed for the nomination of Bill Wehrum as an EPA official to move forward. Sen. Joni Ernst had held up Wehrum at the committee level after the Iowa Republican said she wasn’t satisfied with his responses to questions related to governance of the Renewable Fuel Standard.

Soon after Pruitt’s letter was received, Wehrum’s nomination to be EPA’s Assistant Administrator for the Office of Air and Radiation was cleared out of committee. Around the same time, Cruz placed a hold on Bill Northey’s USDA nomination, which had cleared committee and was ready for floor consideration. This week, Cruz sent a letter to Iowa Gov. Kim Reynolds explaining his rationale for the hold and asking to work with her to find “common ground.”

Critics of Cruz’s action say Northey – headed for a USDA post with jurisdiction of the department’s farm programs – will not have governance over the RFS. Cruz, however, says EPA administers the program “in close consultation with the USDA and Department of Energy,” and in his role, Northey “will have a particularly important voice in the USDA’s promotion of renewable biofuels.”

“Accordingly, I have placed a hold on the nomination of Bill Northey to be the Undersecretary of Agriculture for Farm Production and Conservation until and unless we secure the aforementioned meeting where we can bring diverse interests together to try to find meaningful short-term solutions while setting the stage for longer-term policy certainty,” Cruz wrote to Reynolds.

For her part, Reynolds said at a press conference yesterday that she would be headed to a Republican Governors Association meeting this week in Texas and taking a “Free Bill” T-shirt with her. 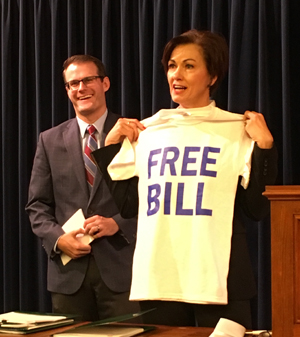 “He is a great secretary of ag,” Reynolds said as she held up the T-shirt. “He would do a great job representing farmers and ranchers all across this country and, as far as I know, Texas has quite a few of them, too”

In a statement to Agri-Pulse, Breanna Smith, Reynolds’ press secretary, said the hold on Northey is “unnecessary,” adding that he is “an incredibly qualified candidate and should be confirmed immediately.”

Another key official has used the “Free Bill” message as a fashion and political statement in the last week: Ag Secretary Sonny Perdue. Speaking to the National Association of Farm Broadcasting last week in Kansas City,  Missouri, Perdue joked that he was wearing a “Free Bill Northey” T-shirt under his suit and tie getup. He also made comments in opposition to the tactic of using holds.

SREs have their day in court, but was it the right court?
Wheeler: RFS changes will need to move as a package

“Fight that policy out in the well of the Senate, but not by withholding people who have nothing to do with the issue you’re concerned about,” Perdue said.

But oil interests have backed the effort. Cruz and eight other senators sent a letter to Trump last month requesting the meeting to discuss “a mutually agreeable solution that will also save refining jobs and help unleash an American energy renaissance.” There’s concern in the oil industry about the impact of Renewable Identification Number credits – used to measure compliance with the RFS – and the prices these credits are fetching.

“It seems clear that Senator Cruz is after the sort of win-win result that comes from reasonable discussions. That seems to be in everyone's best interest,” Scott Segal with Valero said of the senator's letter to Reynolds. “The alternative - where all sides just remain in their corners making self-interested demands - just isn't going to get it done regarding the RFS anymore.”

In his letter, Cruz also alludes to previous tactics used to stall nominees as a way to justify his action. He tells Reynolds, “Your own home state senators similarly placed holds on multiple EPA nominees (and threatened to do the same on all judicial nominees).” Ernst blocking Wehrum for a time at the committee level did hold up a couple other EPA nominees, but Chuck Grassley, Iowa’s senior senator, didn’t agree with Cruz’s insinuation on judicial nominees.

“Just as an example that I’m not blocking nominees, there’s a whole raft of Texas nominees for the courts on the agenda today for a hearing,” Grassley told reporters Wednesday morning. Texans James Ho and Don Willett both appeared before the Senate Judiciary Committee Wednesday for nominations to be a U.S. Circuit Judge for the Fifth Circuit.

As for the meeting that Cruz called for three weeks ago – and requested it occur within three weeks – Grassley doesn’t see it happening.

(Phil Brasher contributed to this report)