Farmers have always looked for ways to save money on inputs while increasing their crop yields, but research in recent years has increasingly made the case that restoring soil health is a way to do both.

Enter biochar, an ancient product now getting a makeover thanks to new research and technology. The U.S. Biochar Initiative, a nonprofit group that promotes the use of biochar, says the product is a “fine-grained charcoal made by pyrolysis, the process of heating biomass (wood, manure, crop residues, solid waste, etc.) with limited-to-no oxygen in a specially designed furnace capturing all emissions, gases and oils for reuse as energy.”

Research on biochar, which has been used in agriculture for more than 2,000 years, has been extensive, with thousands of papers examining its potential to keep nutrients and water in the soil, increase crop yields and absorb heavy metals. And interest seems to be growing, said U.S. Biochar Initiative Executive Director Tom Miles.

“We’ve had a lot of fits and starts,” Miles says. “It feels like we’re really getting some kind of movement.”

There was a lot of interest about 10 years ago, “when we thought there was going to be a carbon market,” Miles said.

Research has been ongoing, both by government and private industry, though it appears to have slowed at USDA’s Agricultural Research Service, says ARS soil scientist Jeff Novak.

“In my opinion, biochar grants are not as prevalent as they were five years ago,” Novak said.

Says Miles, “We’d like to see more (funding).” But he adds that "ARS has been very strongly behind biochar and biochar research.” The Forest Service and EPA also have been looking at biochar, to help reduce woody biomass in forests and to keep heavy metals from migrating into ground and surface waters.

Miles has no figures on the number of acres receiving applications with biochar – he guesses it’s “pretty small” – but estimates that about 135 companies in the U.S. are producing about 45,000 tons of biochar annually. More research and a drop in price will be needed in order for biochar to be used widely in agriculture.

“It’s not well known, and I’ve been working on it for five years,” says David Holden of Holden Research and Consulting in California, who has conducted field trials using biochar. “I haven’t seen it take off anywhere.”

However, Miles said that attendance at a USBI conference last month reflected the change in the biochar market over the last few years.

“What was different about the meeting this year was that this year, two-thirds of the people attending were representing companies in the business or interested in getting into the business, of biochar, whereas in the past, most attendees were in academia,” he said

Given the myriad uses for the product, it’s not surprising that a research paper published last year said it is “known as the new black gold.”

But Novak, who said, “Biochar as a soil amendment is globally recognized,” nonetheless cautioned against labeling it some type of miracle product.

Depending on the feedstock used, “Each biochar has a unique property,” Novak said. The trick is finding the right biochar for the right use, a task USBI will be undertaking as a result of its recent conference, Miles said.

The industry could receive a boost from the farm bill being discussed by a House and Senate conference committee.

The Senate farm bill would authorize a pilot project, to be funded at $15 million annually, that provides financial incentives to producers “to adopt practices designed to improve soil health, including by increasing carbon levels in soil.” 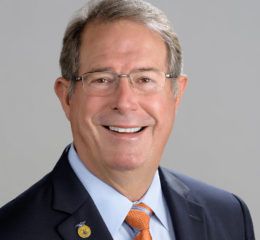 “This program will encourage more farmers to adopt soil health practices, carbon sequestration, and sustainable agriculture, and will help further develop the nascent soil health industry,” says Jim Loar, president and CEO of Cool Planet, a Colorado-based company that hopes to take advantage of the surge in soil health interest.

The company’s flagship product is Cool Terra, an engineered biocarbon product, similar to biochar, that has been shown to increase water and nutrient efficiency and increase yields – all while boosting the amount of beneficial microbial activity and being “carbon negative.” Cool Terra sequesters carbon by putting biomass back in the soil as fixed carbon.

“At the end of the day, it’s the perfect alignment,” Loar says. “It’s profitability and sustainability in one package.”

Loar is an ag industry veteran of more than 30 years, including 14 years at crop protection company Griffin LLC and 14 years at Wilbur-Ellis, where he was vice president of operations for the $2.1 billion agricultural division. He joined Cool Planet as chief commercial officer in 2015 and became president and CEO two years ago.

“What I believe in is soil health – going back and looking at our soil, thinking how we can make the foundation of ag more productive,” he says.

Cool Terra can be created using a variety of biomass materials as a feedstock, but the company is currently focusing on pine and coconut shells.

Cool Terra is generating a lot of buzz with research studies consistently showing increased yields and improved water and nutrient efficiency in a variety of crops – alfalfa, lettuce, tomatoes, strawberries and potatoes, for example. The company also has had success in the cannabis and turf and landscape industries.

Although Cool Planet won’t release sales figures, Loar says it’s growing steadily, expanding to use on 21 different crops and uses this year, Loar says. In addition, “We expect 2018 to end with seven times more acres treated with Cool Terra than was treated in 2017.”

“What we’re going to do is industrialize a cottage industry,” Loar says.

Dave Cheetham, proprietary products manager at Helena Chemical in Chico, Calif., told Agri-Pulse he was initially a skeptic but has been “pleasantly surprised” by Cool Terra. He said field trials showed an increase in carrot yields from 11 tons/acre to 13.5 tons/acre (a 20 percent jump), and an increase in potatoes from 13.6 ton/acre to 17.8 tons.

“In certain cases, if moisture is not delivered, the biochar doesn’t really get turned on,” Cheetham says. “But it stays there in the soil like a future investment.”

Cool Planet also is working on using Cool Terra in feed for animals to reduce methane generation, and as a delivery mechanism for biological products being developed by other companies, whom Loar says he cannot identify.