A 725-page bill released Wednesday night resurrects key parts of President Biden's Build Back Better that were intended to spur the increased use of climate-smart farming practices and boost the production of low-carbon biofuels.

The bill would provide some $20 billion for farm bill conservation programs over four years, plus another $1 billion for conservation technical assistance. Also in the bill is a new tax credit for low-carbon biofuels and funding for biofuel infrastructure.

Keep in mind: This deal still must pass both the House and Senate. But the new funding could make it easier to pass a new farm bill in the next Congress.

What’s next: Schumer wants the Senate to vote on the bill next week.

House Democrats are sending a message to the Labor Department: Hurry up and propose a heat standard to protect farmworkers and other employees from excessive heat. 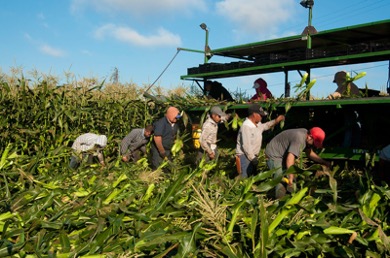 OSHA is already reviewing the issue, but the House Education and Labor Committee approved a bill along party lines Wednesday that would give the agency two years to propose a new rule and another deadline for finalizing the regulations.

Keep in mind: The bill is unlikely to get the GOP support it would need to pass the Senate. But Rep. Suzanne Bonamici, D-Ore., said it’s critical to prod OSHA into action. She says it can sometimes take the agency decades to issue new standards.

OSHA has been evaluating more than a thousand public comments it received on an advance notice of proposed rulemaking that sought input on what the regulations should be. Republicans argue the regulations would be an unnecessary new burden on employers. “Employers are desperate to attract and retain a satisfied workforce,” said Rep. Bob Good, R-Va.

Take note: Democrats also forced through a partisan child nutrition reauthorization bill that would make more kids eligible for free school meals and increase the federal meal subsidy. The bill includes provisions to promote the use of plant-based foods in schools.

Thirty-two House Democrats want President Biden to encourage all federal cafeterias to offer a vegetarian meal option to customers. The lawmakers, led by Jamie Raskin, D-Md., say in a letter to the president that vegetarian entrees aren’t readily provided by federal facilities, even though current food service guidelines for federal facilities recommend them.

The letter was sent in advance of the White House Conference on Hunger, Nutrition, and Health, planned for September.

Bunge loses $59 million due to war in Ukraine

Agribusiness giant Bunge says its earnings have been trimmed by $59 million as a result of the war in Ukraine. The company attributes most of that reduction to losses of inventory located in Ukraine or “in difficult-to-access locations with high costs of recovery.”

Still, Bunge reported earnings of $458 million during the latest quarter, up from $398 million the same period a year ago. Bunge executives called the current commodity price environment “volatile.”

“I thought the team did a fantastic job in one of the more volatile quarters we’ve seen [with] the producer not selling any crops, as well as the consumer [who] stopped buying, trying to see where the market would sort itself out,” Bunge CEO Greg Heckman said.

Three Democratic senators have introduced legislation that would authorize a grant program of more than $1 billion over five years to conserve grasslands.

The bill, dropped by Sens. Ron Wyden of Oregon, Amy Klobuchar of Minnesota, and Michael Bennet of Colorado, would require establishment of a federal strategy to protect, restore and manage grassland ecosystems. The Fish and Wildlife Service would set up the grant program within two years of enactment of the legislation, after consulting with USDA and other agencies.

By the way: USDA would get $1 million per year to carry out research on native seed crop systems.

First Ukraine grain shipment out of Odesa expected this week

Akar toured the Joint Coordination Center in Istanbul and said it is up and running to facilitate Ukraine’s grain exports.

“We believe that the work to be carried out through the Joint Coordination Center will make significant contributions to overcoming the food crisis affecting the whole world, especially to lowering prices as stated by experts,” Akar said in a tweet Wednesday.

He said it. “I’m no worse off for the effort.” - Rep. Bob Good, R-Va., during debate on the House heat standard bill Wednesday. Good downplayed the danger of high temperatures, saying he spent last weekend moving goods from an attic to a storage facility with no ill effects.