The 2014 farm bill is set to expire in just over one week, raising concerns about disruptions in a number of programs, including one of the largest conservation programs as well as much smaller programs that help commodity groups open overseas markets.

Congressional negotiators had hoped to reach agreement on a new farm bill in time to have it enacted by Sept. 30, when the 2014 law expires, but the talks remain bogged down this week over a range of policy and funding disagreements.

Many of the largest programs in the farm bill won’t be affected by the expiration. Crop insurance is permanently authorized. Congress doesn’t have to do anything to keep it going. Authority for the Supplemental Nutrition Assistance Program will be automatically renewed through the appropriations process.

And the major commodity programs, including the Agriculture Risk Coverage and Price Loss Coverage, are eligible for the 2018-19 marketing year for each covered commodity. The Margin Protection Program for dairy doesn’t expire until Dec. 31, at which time a 1949 law would kick in, forcing USDA to take steps to increase the price of milk, a prospect known as the "dairy cliff."

There could be disruptions elsewhere before December. USDA’s Natural Resources Conservation Service notified state NRCS offices on Monday that their work with the Environmental Quality Incentives Program must be limited after Oct. 1 to “subaccounts not affected by potential changes in the new farm bill.”

EQIP’s funding authority after Oct. 1 is not in doubt: Congress earlier extended the program through fiscal 2019. The NRCS guidance is based on the fact that the program could be altered by a new farm bill. Don Parrish, who follows conservation policy for the American Farm Bureau Federation, said NRCS is delaying state allocations of EQIP funding in the new fiscal year to see if spending levels could be changed in the final bill. That is unlikely to have an impact on applicants, he said. 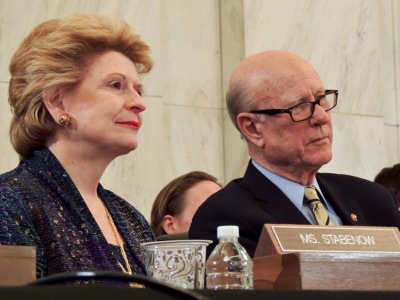 There are 39 other, smaller programs that are set to run out of funding on Sept. 30. They include the Foreign Market Development (FMD) program, which subsidizes the cost of maintaining commodity groups’ overseas offices, and the Technical Assistance for Specialty Crops (TASC) program, which helps fruit, vegetable and nut producers pay for projects aimed at overcoming barriers to their products in foreign markets, including sanitary-phytosanitary restrictions.

FMD was funded at $34.5 million a year under the 2014 farm bill, while TASC received $9 million annually.

More than two dozen groups currently participate in FMD. Melissa George Kessler, director of strategic relations for the U.S. Grains Council, says her organization will be able to weather a lapse in FMD funding but smaller groups may be hard-pressed to keep the lights on.

The new trade promotion program that USDA announced recently as part of its $12 billion trade assistance package for farmers hurt by the Trump administration's trade disputes won’t replace FMD funding because the money can’t be used for staff or office costs, she said.

Among the groups worried about the farm bill lapse is the American Peanut Council, which operates one overseas office, in London, which is paid for with FMD funds.

The office manages the group’s promotional efforts in Europe as well as monitoring regulatory issues in the European Union, which accounts for a third of U.S. peanut exports, said Stephanie Grunenfelder, the group's senior vice president. FMD also partly funds APC offices operated by contractors in Canada and Mexico.

“Should FMD be ended, staff would be laid off, and our office would be closed within a few months,” said Grunenfelder. “Our staff has more than 30 years of experience and the long-term relationships built over time, as well as industry knowledge, would be lost in one of our largest and most important markets.”

For many groups, the biggest concern is that lawmakers won’t reach a deal on a new farm bill by December, forcing Congress to pass an extension of the 2014 farm bill into 2019, when a new Congress convenes. Unless the extension provided funding to continue expired programs such as FMD and TASC, they would out of money in 2019.

That is what most worries Kam Quarles, vice president of public policy at the National Potato Council, which relies on TASC to fund its ongoing efforts to remove trade restrictions on U.S. potatoes in Mexico. Mexico currently restricts sales of fresh U.S. potatoes to areas along the U.S. border.

“I think that people can kind of keep the wheels on for a month or a couple of months...But if you drag this out six months, eight months, it’s going to start to hurt,” Quarles said.

USDA’s Foreign Agricultural Service, which administers both FMD and TASC, declined to comment on what would happen to the programs after Sept. 30, if no farm bill is enacted by then.

“Congress is certainly aware of the deadline, and we hope that lawmakers pass a new farm bill by then,” the agency said. “We don’t want to speculate about a hypothetical situation that has not materialized yet. Members of Congress know how important farm bill programs are to agricultural producers.”

Ferd Hoefner, senior strategic adviser to the National Sustainable Agriculture Coalition, expressed frustration that there isn’t more concern about a lapse in farm bill authority beyond the trade programs. For example, he said the Farm Service Agency cannot process new applications for the Conservation Reserve Program after Oct. 1.

FSA provided a statement similar to the one issued by FAS when asked how it was responding to the expiration of the 2014 farm bill.

Congress could address the uncertainty by providing a short-term extension of all of the programs as part of the continuing resolution that must pass by Oct. 1 to fund agencies that don’t have a FY19 appropriation enacted. The Senate approved such a CR on Tuesday that would run until Dec. 7.The uncertainty and stops and starts in program authority are a waste of time and money for USDA, Hoefner said.

The lead Senate negotiators, Agriculture Chairman Pat Roberts, R-Kan., and ranking Democrat Debbie Stabenow of Michigan, have reported little progress in the talks and have emphasized in recent days that they have until December to reach a deal.

A spokeswoman for Stabenow said that Congress would need to provide funding for the expiring programs if a long-term extension is needed in December.