Trade policy uncertainty following U.S. imposition of import tariffs and retaliation by China and other trading partners has forced International Monetary Fund (IMF) economists to adopt a more pessimistic outlook for growth in the global economy.

Although “broad-based momentum” in the world economy seemed apparent just six months ago when the IMF anticipated a growth rate of 3.9 percent for both 2018 and 2019, “that number now appears overoptimistic,” Maurice Obstfeld, the fund’s economic counselor and research department director, told the IMF-World Bank annual meetings in Bali Tuesday.

With “clouds on the horizon,” and “the likelihood of further negative shocks,” he said, IMF reduced its forecast to 3.7 percent. “In several key economies, moreover, growth is being supported by policies that seem unsupportable over the longer term.”

While growth in the United States continues at a robust pace that began in mid-2016, Obstfeld added, “U.S. growth will decline once parts of its fiscal stimulus go into reverse.” Thus, IMF downgraded its 2019 growth forecast for the United States “owing to the recently enacted tariffs on a wide range of imports from China and China’s retaliation,” he said.

IMF also marked down China’s expected 2019 economic growth, although the nation’s domestic policies will ease the effects of the decline, Obstfeld said. 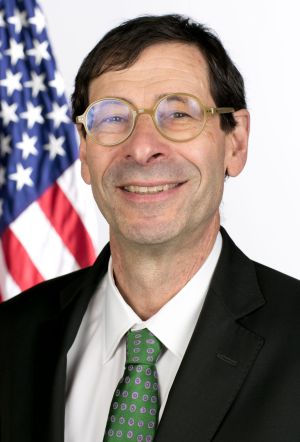 “Downside risks to global growth have risen in the past six months and the potential for upside surprises has receded,” says the report. Growth was revised down for Argentina, Brazil, Iran, and Turkey, among others, and a number of Asian economies are also projected to experience somewhat weaker growth in the aftermath of recent trade measures, it adds. “Beyond the next couple of years, growth in most advanced economies is expected to be well below the averages reached before the global financial crisis of a decade ago.”

The report expects U.S. economic growth to decline as fiscal stimulus begins to unwind in 2020, at a time when the monetary tightening cycle is expected to be at its peak. “Growth in China will remain strong but is projected to decline gradually, and prospects remain subpar in some emerging market and developing economies,” it continues.

Risks to global growth “skew to the downside in a context of elevated policy uncertainty,” IMF points out, with downside seen in more trade protectionism and higher political risk.

It also urges countries to avoid “protectionist reactions to structural change” – in other words, blaming import competition for jobs lost to automation and changing marketplace demand – and suggests they seek “cooperative solutions that promote continued growth in goods and services trade” that it considers essential to preserve and extend economic expansion.

In addition to escalating trade tensions, IMF considers “the potential shift away from a multilateral, rules-based trading system” as significant threats to the global outlook. In only the last six months, it argues, “protectionist rhetoric has increasingly turned into action, with the United States imposing tariffs on a variety of imports, including on $200 billion of imports from China, and trading partners undertaking or promising retaliatory and other protective measures.”

Amid the uncertainty, Obstfeld observes, “it's definitely possible in those scenarios to take close to a percentage point off GDP growth if all countries act and retaliate.” However, he says resolution of trade disputes would go a long way to improving the economic outlook.

“The possibility that China and the U.S. resolve their disagreements would be a significant upside to the forecast.” Economists are more tentative in their outlook because, “if you have the world’s two largest economies at odds, that is a situation in which everyone, everyone is going to suffer. So, it would be great if the talks could lead to an accommodation in which disruptions to trade were put aside.”