The agriculture division of Minnesota-based Recombinetics has joined researchers in Ireland and Northern Ireland in employing gene editing and other techniques in a long-term quest to rein in bovine tuberculosis, and perhaps to make people safer from TB as well.

“For us, this is phase one in finding how we are going to make animals resilient and not increase the spread of the disease,” said Tad Sonstegard, Recombinetics’ chief agricultural scientific officer.

Their goal isn’t full TB resistance, which he says is probably not achievable anyway. “Complete resistance means you encounter the bug and you would show no signs of having encountered it,” he explains.

Instead, his team is pursuing an array of ways to develop “resilience,” or enough defense so the host doesn’t get sick. "Their immune system can deal with it and they don’t become big transmitters of the disease,” explains Sonstegard.

Sonstegard and scientists at University College Dublin and Queen’s University Belfast are focusing on a cow's defense against the bovine tuberculosis (BTB) pathogen because the bacteria continues to attack beef and dairy cattle – plus people and a host of other mammals worldwide. Recombinetics reports global agricultural damage averages about $3 billion a year.

The World Organisation for Animal Health, known by the French acronym OIE, reports most economically advanced countries, including the U.S., have eradicated or sharply reduced BTB from cattle herds, but it is “prevalent in most of Africa, parts of Asia and of the Americas.” That’s in part because deer and other wildlife can re-infect cattle herds that were BTB-free.

In the U.S., the disease has only affected fewer than a dozen herds annually in recent years, out of more than 900,000, according to USDA’s Animal and Plant Health Inspection Service. A century ago, it was the country's “most prevalent infectious disease of cattle and swine. ... (causing) more losses among U.S. farm animals . . . than all other infectious diseases combined.” The low incidence in recent years is largely because of eradication efforts that began over 100 years ago and have cost more than $5 billion in a century, APHIS says. 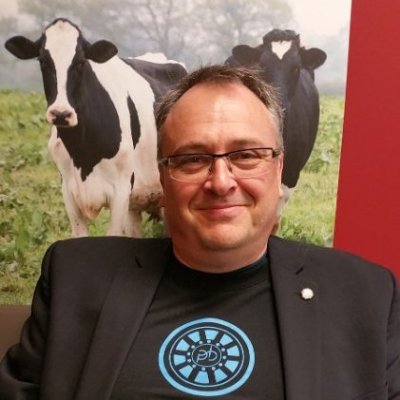 Sonstegard said his team focuses on BTB itself but also the macrophage, the very large cell that works in lung passageways to absorb BTB and other pathogens, and the interactions between the BTB bacterium and the macrophage.

Their main goal: “We’ll have a deeper understanding of how the macrophage interacts with the pathogen,” he said. They’ll be selecting cattle, for example, whose macrophages show robust defense against BTB while they also edit cattle genes to improve resilience.

What’s more, he said, advances in their work “will have an impact, I think, on TB infections in humans.” Why? “The way the host’s (immune system) reacts with the bacteria is the same model for humans as it is for cattle. So any information we reveal in cattle can . . . improve understanding of the disease in humans.”

That’s also true for other animals, and “we would think that farmed deer and water buffalo could be targets” for advances his team or others finds in BTB research, he said. But he points out gene editing for such BTB resilience, as with cattle, requires “advanced reproductive techniques” such as cloning and in vitro fertilization in order to deploy genetic advances.”

Sonstegard doesn’t know if new BTB resilience traits will be subject to what’s been traditionally long and very expensive regulatory paths to approval. But, he said, “This is a different technology. We’re not really making transgenic animals; we’re just doing mutational breeding. It comes down to semantics in the way that GMO is defined.”