Farm bill fate may hang on dispute over 1996 welfare reform

A handful of words added at the last minute to the 1996 welfare reform law are at the heart of a dispute that farm bill negotiators say remains the biggest barrier to reaching an agreement before the end of the year.

The 1996 law imposed work requirements on recipients of food stamps, now known as the Supplemental Nutrition Assistance Program. Able-bodied adults under the age of 50 and without children at home would be cut off from the program if they were out of work more than three months at a time over a three-year period. Under the law, those adults are supposed to work or be in an approved training program at least 20 hours a week to qualify for SNAP.

But the legislation didn’t become law until House Republicans included a small but critical section to the bill that would allow states to get exemptions from the time limits for regions that have unemployment rates exceeding 10 percent or lack “a sufficient number of jobs to provide employment” for the food stamp recipients.

The Clinton administration developed a detailed set of ways that states could qualify for the waiver based on that language in the 1996 law: By far the most popular way is to have an average unemployment rate 20 percent above the national average for a 24-month period, according to USDA data obtained by Agri-Pulse.

That measure is far easier to meet than a local unemployment rate of more than 10 percent but it tracks with criteria that the Labor Department uses for determining whether a region is a “labor surplus area,” according to the Center for Budget and Policy Priorities, a research and advocacy group that has studied the issues.

Other ways for an area to qualify for the SNAP work-rule exemption is to be designed as a "labor surplus area" by the Labor Department or to be approved for extended unemployment benefits.

Four states - Alaska, Louisiana, Nevada and New Mexico - have statewide waivers from the time limit. Twenty-nine others have waivers for individual regions, including 1,080 counties counties, Indian reservations and cities or townships. Among the areas with exemptions are four districts on the north side of Manhattan that include Harlem and Washington Heights.

With the sole exception of Tennessee and an Indian reservation in South Dakota, all of the statewide and local exemptions were granted on the basis that their unemployment rate was 20 percent higher than the national average.

Sixteen of Tennessee's 95 counties have exemptions, and they are all based on being designated a labor surplus area. The waiver for South Dakota's Yankton reservation is based on its employment-to-population ratio.

Sixteen of the 29 states with geographic exemptions have Republican governors, including Tennessee as well as Georgia, where Agriculture Secretary Sonny Perdue was once governor.

President Donald Trump carried 15 of the states with SNAP waivers in the 2016 election, including Ohio (38 counties) and Michigan and Pennsylvania (69 counties each), but his administration believes the Clinton-era standards are too liberal.

"The administration is concerned that even with unemployment near record lows, states continue to seek waivers of the work requirement for able-bodied adults without dependents — waivers that we are legally bound to approve," according to a statement issued by the department. "USDA is working with states to strengthen their employment and training programs, and working with Congress to see statutory requirements strengthened, because those who can work, should work.”

President Trump’s fiscal 2019 budget called for restricting the waivers to counties with jobless rates of over 10 percent, a change that would require congressional approval. It would save the government about $1.8 billion a year.

According to an analysis by the website 24/7 Wall St., only 16 counties nationwide have unemployment rates exceeding 10 percent and half are in Alaska. The rest are in Arizona, California, Kentucky, Mississippi, New Mexico, Texas and Washington.

That proposal was dead on arrival in Congress, and Perdue subsequently developed a proposed rule, now under review at the Office of Management and Budget, that would make some as-yet-undisclosed changes in the rules developed by the Clinton administration. USDA's latest regulatory agenda says only that the rule "would modify SNAP requirements and services for able-bodied adults without children in response to public input provided through an advance notice of proposed rulemaking published" in February.

But Perdue has made clear that he would prefer that Congress tighten the 1996 waiver provisions and has said he would recommend that Trump sign a new farm bill that addresses the issue.

House Agriculture Chairman Mike Conaway, R-Texas, has been insisting on changes to the waiver standards in the 1996 law, but “that poses problems to some in the Senate, big time,” according to a source close to the negotiations. 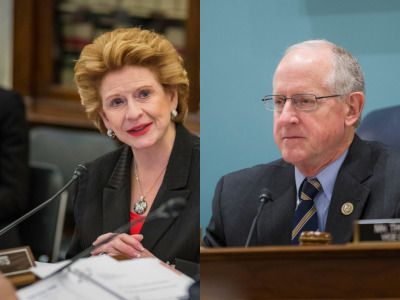 The lead negotiator for Senate Democrats, Debbie Stabenow of Michigan, told Agri-Pulse there have been staff-level discussions about the issue but no resolution. She declined to say whether she would rule out a compromise. But she said, “We’ve not had any problems in Michigan” with the waivers.

“Every single senator so far has indicated that the Senate has recognized the value of keeping SNAP as a strong safety net, not doing things that make people hungrier,” said Ellen Vollinger, legal director for the Food Research and Action Center.

The top Democrat on the House Agriculture Committee, Collin Peterson of Minnesota, argues that the real reason Republicans want Congress to tighten the waiver rules is that most of the states that use them have GOP governors. Two of the four states with statewide waivers have Republican governors as do sixteen of the 29 states with partial waivers.

Seventeen states, 15 of them with GOP governors, have no waivers.

Conservative groups that have been pushing Congress to tighten SNAP work requirements say that the House-passed farm bill didn’t go far enough because it left USDA’s waiver authority intact. (The bill has been criticized by anti-hunger advocates for other reasons, including that it would expand the time limits to cover able-bodied adults in their 50s and parents of children over the age of 6.)

Robert Rector, a welfare policy analyst with the Heritage Foundation, said at an event sponsored earlier this year by the American Enterprise Institute, that about 4.5 million work-capable adults would remain exempt from the work rules under the House-passed farm bill.

Jason Turner, executive director of the Secretaries' Innovation Group, a coalition of GOP state agencies that advocates for welfare reform, said the standard most commonly used for granting exemptions, 20 percent over the nationwide jobless rate, is essentially meaningless. The current U.S. unemployment rate is 3.7 percent. "There are plenty of jobs everywhere in the US and particularly entry-level jobs," he said. "There should be no exemptions from the work obligations."

But anti-hunger advocates believe the existing time limit is too strict and point to data that show that the number of ABAWDS covered by the waivers has already dropped dramatically since the 2008-2009 recession.

In 2017, 36.4 percent of the nation’s population lived in areas covered by waivers, compared to 89 percent in 2009 and 20.5 percent in 2002, according to an analysis by the Center for Budget Policy and Priorities. Every state except Delaware has sought a waiver at some point, the group said.

“While not every governor has stepped up and used every authority that he could ask for to protect areas with insufficient jobs, many governors of both parties have done that over the years.,” said FRAC's Vollinger. “That’s because they are living with real people, real economies.”