It won't go down as one of the best-attended events at the recent National FFA Convention, but it just might prove to be one of the most relevant meetings to the current farm policy climate.

A small group of FFA members and Canadian 4-H students took part in a mock trade negotiation at the gathering in Indianapolis, trying to negotiate the best deal for their fictional countries and hopefully avoid the need for dispute settlement in the process.

“We’re told over and over that we’re the future,” Ashley Willits, a past national FFA officer who facilitated the workshop, told attendees. “This is a cool opportunity to get some practice.”

Participants were split into countries and given raw materials – in this case, construction paper in a variety of colors and tools to cut that paper into certain shapes. A unit of soybeans, for example, had to be a green oval measuring about 17 centimeters by 12.5 cm, while beef ownership was denoted by a 10-by-10 red square. The groups had to trade the resources or acquire enough currency from a bank to buy what they needed. A few wrinkles were added throughout the discussions, meant to show the impact of regulatory changes and weather issues and how those factors might affect trade relationships.

Overall, negotiations unfolded similarly to the trade discussions agriculture has watched for several years. Deals were made, deals were rejected. Two countries joined their resources and labor; one country backed out of a deal at the last second, leaving a negotiator without the agreement they needed before time expired.

About a dozen people participated in the workshop at a convention of almost 70,000 people. While that was a small fraction of those in attendance, it was perhaps emblematic of recent talks to update the North American Free Trade Agreement, where a few dozen negotiators updated a deal for three countries with a combined population of about 491 million. 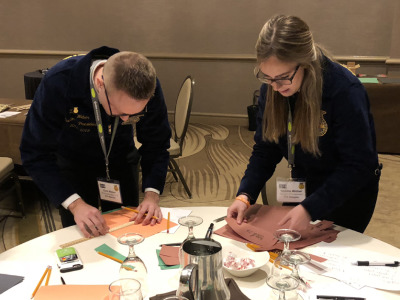 FFA members Zack Weber of Illinois and Naddile Widner of Washington turn their raw materials into tradeable commodities during an FFA workshop.

For some of the students, it was a chance to get some practice in what might be a future career.

“It really showed how different dynamics play out and how if regulations change, how that does affect you and others around you,” Naddile Widner, Washington’s State FFA Secretary, told Agri-Pulse. She says she’s interested in the political process as a potential career and hopes to form a similar workshop to present to students in her home state to possibly pique their interest as well.

Logan Emiry, a college student who grew up on an Ontario dairy farm, said he thinks agriculture students are doing a good job following trade developments, especially as producers recognize the value of trade in the profitability of their operations. Given the recent spotlight on the changes that could come about as a result of the new United States Mexico Canada Agreement, he said interest in trade won’t go away any time soon.

“I think, especially in Canada, we’ve seen a lot of people following the trade deal as it has implications on their real life,” he said, “and I think kids my age are really looking into what it holds for their future.”