Democrats picked up at least seven governor seats Tuesday night, but Republicans prevailed in the key states of Iowa, Ohio and Florida. Thirty-six states had gubernatorial elections this year, 26 of which Republicans were defending.

As Election night ended, much of the spotlight was trained on too-close-to-call races in Georgia and Wisconsin, but in Illinois, Kansas, Maine, Michigan, and New Mexico Democrats won governorships that had been held by Republicans. In Georgia, former state House Minority Leader, Democrat Stacey Abrams, had not conceded to Secretary of State Brian Kemp, hoping that late-counted ballots would prevent Kemp from gaining a majority and force a runoff. As we went to press, Kemp led by 50.7 percent versus 48.3 percent.Races in Alaska and Connecticut were also not yet finalized.

The Wisconsin race, between Republican incumbent Scott Walker and Tony Evers, the superintendent of public instruction, had been neck-and-neck in the polls, a pattern that continued through the night as precinct results trickled in. Late in the evening, Evers took the lead after a late influx of absentee ballots from Milwaukee County. The Associated Press called the race for Democrat Tony Evers, based on unofficial returns, but the race could be headed for a recount.

On his website, Evers said as governor, he would strengthen the University of Wisconsin Extension system "to offer support and market assistance to help farmers navigate brutal commodity markets. In the past, UW-Extension was key to building up agriculture in Wisconsin – they need to again be a part of finding solutions." Walker was endorsed by the Wisconsin Corn Growers Association and the Dairy Business Association.

In Illinois, Democratic businessman and billionaire J.B. Pritzker defeated Republican Gov. Bruce Rauner in Illinois. At an Illinois Farm Bureau forum in August, Pritzker criticized Rauner for not doing enough to protest tariffs that are hurting U.S. farmers and said the health of Illinois agriculture should not be a partisan issue. 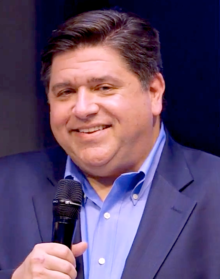 In Kansas, Democrat Laura Kelly, the Senate Assistant Minority Leader, defeated the Republican Secretary of State, Kris Kobach. Kelly has said that “corporate farming is an important part of our agricultural sector” but that Kansas “needs reasonable regulations to balance the interests of communities and corporate farms.” Significantly, farm groups stayed out of the race, endorsing neither candidate.

For full results of the governors' races, go here.