Across all farmers, desire to invest in smart irrigation systems may not be high, but it depends upon who is asked.

In fact, when Alpha Brown, an agriculture big-data analytics company, interviewed 680 farmers, mostly from the U.S. and Canada, it found nearly half of farmers who already irrigate crops and orchards are possible investors in smart irrigation (SI).

Gil Rabinovich, Alpha Brown chief executive, says the survey included as SI “systems that monitor what’s going on in the field,” including soil moisture to determine watering needs, and systems that automatically trigger water pumps (in the field or remotely), and use other technologies.

While 84 percent of farmers interviewed were not familiar with any SI systems, the survey found around 10 percent reported already adopting one of three emerging categories of SI: 7 percent using soil and/or aerial sensors to monitor soil and/or plant moisture, 3 percent using such systems by remote computer operation, and 1 percent applying such systems using dedicated software.

The report tallies total SI investment in the U.S., which Rabinovich says is “the amount of money farmers have paid so far,” at about $700 million.

But what leads American farmers to invest in SI in addition to their current irrigation operations? Increased profitability above all else, the report says. But the main factors behind the profitability target, it found, are scarcity of water, which makes it expensive, and the production of high-value crops that can deliver a lot of cash per production acre.

Thus, not surprisingly, the survey found farmer interest in SI increasing regionally as annual rainfall decreases, east to west, across the Great Plains to the Rocky Mountains region and desert Southwest, and it was just as high in the West Coast states, with their abundance of high value crops.

Nearly half of farmers interviewed had no interest in adopting a type of SI system, the survey found, but 80 percent of the rest expressed interest especially in two kinds of systems: Soil sensors to report moisture needs, and all-in-one systems.

Alpha Brown found that farmers’ biggest barrier to SI is the initial startup costs – devises, software, training and other expenses – on top of their conventional irrigation costs.

Among farmers with conventional watering systems, irrigation operating costs are usually low or moderate. For half of them, it is under $50 per acre; for three-fourths, less than $150 per acre. For many of them, the incentive is thus not high to spend on SI gear. 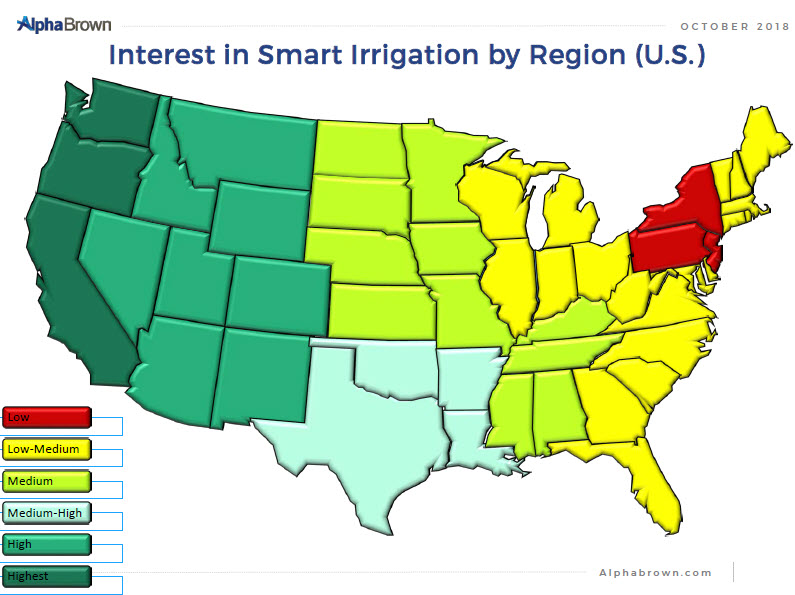 It also found the level of interest in SI climbed to about 20 percent of all farmers surveyed as farm size passed 1,000 acres, and continued to increase with farm size.

Thus, Rabinovich says, the best market for SI systems is in big farms, and that’s largely because “the farmer needs to go fence row to fence row to collect data,” and smart devices are needed to get that done on big spreads.

The report includes a directory to 11 firms, such as WaterBit, CropX, RainPal, and Arable, that provide various types of smart irrigation systems to farmers.