How two small towns adapted to surge of immigrant labor

Two former nearly all-white Nebraska towns appear to have integrated a surge of Spanish-speaking immigrants, mostly meatpacking plant workers, more smoothly than other communities in similar circumstances, according to  new report from the Center for American Progress (CAP).

The experience of the two towns –  Lexington, population 10,090, and Madison,  2,634 – contrasts with the view that sees rural areas beset by “economic decline, deep-rooted despair and resentment [and] overwhelming support for President Donald Trump and his policies that target immigrant communities,” as described in an earlier analysis by CAP, a Washington-based think tank with liberal leanings.

The two towns also offer a potential template for other communities dealing with an influx of immigrants and refugees from different cultures and ethnic groups. CAP finds a 130 percent growth among foreign-born adults in 2,767 rural places since 1990, contrasted with a 12 percent decline in the communities’ native-born adult populations.

“The realities of rapid demographic shifts have unsettled many communities, stoking xenophobic sentiments and polarizing dialogue about the merits of immigration and refugee resettlement,” adds the CAP report, “Proactive and Patient: Managing Demographic Change and Immigration in Two Rural Nebraska Communities.”

Their experience also is a story of the impact of meatpacking plants across the rural Midwest and the decline of the native-born population. By 2000, more than 60 percent of meatpacking jobs had relocated from cities to rural areas, “a product of packing plants’ desires to bring production closer to cattle and hog farms and to reduce labor costs as workers in rural areas are less likely to be unionized than their urban peers.”

The report credits the meat processors for making “significant improvements to worker protections and safety” but notes that jobs in the industry are still dangerous and salaries have stagnated. The national average hourly wage – $13.46 as of May 2017 – is far from its inflation-adjusted peak of nearly $20 in the 1960s through the 1980s, “making recruitment and retention a challenge,” the report points out.

However, companies such as Tyson “are now making investments to mitigate the challenges that the industry initially put in motion, particularly around the integration of its foreign-born workers,” observes. Tyson employs translators, liaisons and chaplains to help employees navigate schools and government offices. It has subsidized housing developments in both communities, bought school equipment, sponsored sports teams and donated thousands of dollars of in-kind products to community fundraisers.

The arrival of meatpacking coincided with a decline in native-born population. Through the 1980s, 100,000 more people left Nebraska than entered. At the same time, Latinos in 10 Midwestern states including Nebraska grew from 1.2 million to 1.8 million.

Lexington was sharply divided when Iowa Beef Processors () – which was acquired by Tyson Fresh Meats a decade later – opened in 1990 and began hiring immigrant workers. Some long-term white residents packed up and moved out.

Nevertheless, the remaining residents “learned to embrace the new culture, and patience and tolerance prevailed,” Winnie Stachelberg, ’s executive vice president for external affairs, said at a seminar at which the report was released.

“The last 30 years were bumpy,” said Sara McElmurry, a fellow at the Chicago Council on Foreign Affairs and author of the report. “It’s still a work in progress.” However, McElmurry said in a subsequent interview, “An incredibly dedicated cohort of civic leaders rolled up their sleeves” and took steps to welcome the newcomers.

She also discovered “a lot of effort in city hall and the schools to boost civic engagement after they [immigrants] are naturalized.” For example, she cited an effort to encourage residents to fill out 2020 census forms because the results will have “big implications for funding, representation and redistricting.” 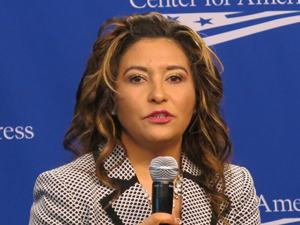 Voter registration and participation by new citizens also has shown results. In 2012, Lexington voters elected to their city council Dora Viva, who emigrated from Mexico to work at the plant in 1991 and now is an insurance agent. “I see her as real bridge between more recent arrivals and folks who have been there longer,” McElmurry says.

Lexington is now helping Somali refugees acclimate, Viva told the seminar in Washington. “Somali migrants face more difficulty but Latinos welcome them. They are struggling like Hispanics did 30 years ago.” Now fluent in English, she also is learning Somali and renting apartments to the refugees, many resettled from urban areas.

Nearly 10 percent of Lexington’s school population is African-born, said Kyle Hoehner, principal of Lexington High School, and up to 90 percent is foreign-born and 80 percent are from families in poverty. However, he said the school maintains a 96 percent daily attendance rate and a graduation rate 3 percent above the Nebraska statewide average. His school has students born in 41 countries and who speak 30 languages, he said. In about 1996, there was an exodus of teachers, he told the seminar, but now Latino graduates have completed college and are returning to their alma mater to teach.