The lead Senate negotiators on the farm bill said Wednesday that a final agreement with the House was "very, very close" after congressional leaders decided how to address the Trump administration's demands for new authority for addressing wildfires.

He and the committee's ranking Democrat, Debbie Stabenow of Michigan, declined to discuss how the forestry issue would be settled or to discuss other details of the legislation and remaining negotiations. "We’re very, very close to getting a bill and going any farther would be counterproductive," she said.

At issue in the negotiations over the bill's forestry title was whether Senate Democrats would agree to allow a new exemption, or categorical exclusion, from some requirements of the National Environmental Policy Act.

“The leadership has ownership of the forestry title, and they’re negotiating that, and we’re getting very close on the rest of it,” House Agriculture Chairman Mike Conaway, R-Texas, told reporters Tuesday evening outside the House chamber. “We’re really, really close.”

Roberts said earlier Tuesday that the dispute centered on salvage timber. A provision in the House-passed farm bill would allow a categorical exclusion to facilitate harvesting of salvage timber following wildfires.

Ahead of leadership meetings on the dispute Tuesday Stabenow said the authority the administration was seeking would kill the farm bill. 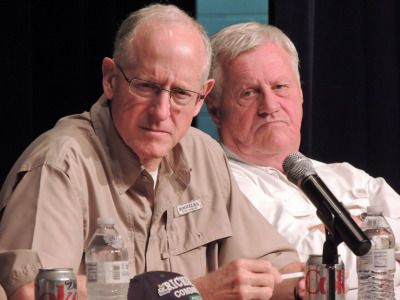 “The negotiation is going on at the leadership level," she said. "Everything I’ve seen would not get sufficient votes in the Senate."

Among the non-forestry issues remaining to be settled were differences between the House and Senate over eligibility rules for commodity program payments, Stabenow said.

Sources said the remaining dispute appeared to focus on a House provision that would allow cousins, nieces and nephews to qualify for payments and a Senate provision that would reduce the adjusted gross income limit for commodity programs to $700,000 a year, down from the current cap of $900,000.

Agriculture Secretary Sonny Perdue and Interior Secretary Ryan Zinke sought to increase the pressure on Senate Democrats to compromise by visiting the site of the devastating Camp Fire in northern California this week. At one point, Perdue said that “common-sense steps that we know work” to reduce wildfires were being blocked by opponents who go to court to protect “pristine” forests.

Environmental groups said the administration already had adequate authority to thin forests of dead and dying trees that could be a wildfire threat, and allowing salvage would damage forest ecosystems, slowing their recovering and leaving areas prone to mudslides.

The fiscal 2018 omnibus spending bill enacted in March including a new categorical exclusion for “wildfire resilience projects" as well as other new authority intended to help reduce the threat of fires.

“Every time they (the Forest Service) get more authority they come back and ask for more authority,” said Sandra Purohit, government relations legislative counsel for Defenders of Wildlife.

But members of the Congressional Western Caucus, including Oregon Democratic Rep. Kurt Schrader, were siding with the administration.

"This Congress made some positive strides in the fight against wildfire destruction, but there’s more that needs to be addressed and now, as the 115th Congress comes to a close, is our opportunity to usher some of these solutions across the finish line,” said Schrader.