President Donald Trump, while talking to reporters aboard Air Force One this weekend, dropped a trade bomb few were expecting: He said he planned to officially notify Mexico and Canada that he will pull the U.S. out of the North American Free Trade Agreement, giving Congress six months to ratify his new trade pact or suffer the consequences.

Those consequences would be dire, according to recent studies that show U.S. agriculture exports to Mexico and Canada would drop by roughly $10 billion annually if the U.S. exited the 24-year-old trade pact. Mexico and Canada would be forced to re-erect long-ended tariffs on virtually all U.S. farm products, reducing trade in dairy, oilseeds, grain, meat and other products, according to one of the studies published by the C.D. Howe Institute.

It’s the fear of those consequences – sending U.S. trade into the tariff-laden situation of pre-NAFTA times – that Trump is counting on to scare Democrats into supporting his renegotiated pact, now called the United States-Mexico-Canada Agreement.

“And so Congress will have a choice of the USMCA or pre-NAFTA, which worked very well,” Trump said.

But it didn’t work very well for farmers, especially looking back on how much more farm commodities the U.S. sells to Mexico and Canada after tariffs fell away because of NAFTA, according to officials like Kirk Merritt, the executive director of the Ohio Soybean Association.

Both the current NAFTA or the renegotiated USMCA are good for U.S. soybean exports, he said.

“NAFTA has allowed our exports to Mexico, especially, grow significantly,” he said in an interview. “We want to continue to grow that market and I think the USMCA certainly will allow that to happen. We’ll advocate for its ratification as soon as possible.” 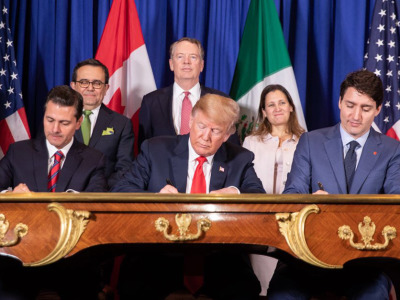 Still, Trump campaigned on his disdain for NAFTA and a promise to either end it or redo it. Now, in what has become a new high-stakes game of chicken over the trade pact, the president is forcing a showdown with Congress and farmers have the most to win or lose.

Larry Kudlow, the director of the White House’s National Economic Council, said Trump’s threat was solely to “light a fire” under Democratic lawmakers who are gearing up to potentially complicate ratification of the hard-fought USMCA.

But Democratic lawmakers have been increasingly talking about their dissatisfaction with the new USMCA – even as Trump, Canadian Prime Minister Justin Trudeau and Mexican President Enrique Peña Nieto were signing it Friday on an ornate wooden desk in Buenos Aires.

“I continue to have serious questions for the Administration about the recently finalized USMCA agreement, which need to be answered before I can come to a conclusion on the underlying agreement,” said Rep. Ron Kind, D-Wisc., on Friday. “These issues include enforceability of labor and environmental standards, and lifting the tariffs on Mexico and Canada that continue to hurt Wisconsin workers, farmers and businesses.”

That criticism is frustrating Trump, Agriculture Secretary Sonny Perdue told reporters Tuesday when asked if the president would follow through with his threat. Perdue said he supports Trump’s hardball tactic of threatening to pull out of NAFTA, but the USDA chief predicted that wouldn’t happen.

Trump, he said, may not have understood just how important NAFTA was to farmers back on the campaign trail, before the election, but he understands now.

“Congress will recognize that the USMCA that President Trump has negotiated is a better deal for the American economy, the American workers and American agriculture and I believe (Congress) will pass it and it will become law,” Perdue said.

But some Democratic lawmakers, perhaps emboldened by winning back control of the House in the November elections, are stressing the need to influence the trade pact.

“I encourage (U.S. Trade Representative Robert) Lighthizer to meet with the Ways and Means Committee, as well as Members of the incoming majority who are dedicated to finding common ground in our trade agreements,” Kind said. “Without the inclusion of the Democratic party, the odds of finalizing the agreement are low.”

Sen. Roy Blunt, R-Mo., is predicting a hard fight next year for USMCA ratification, while lamenting the Trump administration did not push to get that done this month during the lame duck session.

“I think it’s going to be hard to do,” he told reporters Monday on the sidelines of the Missouri Farm Bureau's annual meeting. “Our friends on the other side have not voted for trade deals in any significant number in a long time.”

But there’s plenty of opposition to trade pacts in both parties, said Blake Hurst, president of the Missouri Farm Bureau.

“We in agriculture have a lot of education to do in both parties in order for people to understand the importance of trade,” he said, “not only to our industry, but to the U.S. economy as well.”