Livestock producers in Montana are finding out that when it comes to the Department of Agriculture’s Livestock Indemnity Program, bad might not be bad enough.

In a series of letters, Farm Service Agency officials at the state and federal levels have been waging a debate over whether or not a consistently rough winter should make producers eligible for livestock disaster assistance programs. Federally, FSA has said no, something that doesn’t sit well west of the beltway.

In a letter to federal FSA leaders in July, state FSA officials from Montana, Washington, Alaska, Idaho, and the Dakotas say livestock producers are “very frustrated with the rules and requirements of the LIP” and local FSA employees worry they have “been advertising a program that we cannot deliver under the current rules and criteria.”

“During stressful times in the winter when their herds are at high risk for death due to the weather, their minds are not on taking pictures and researching official weather sites so that they can qualify for LIP relief,” the letter said. “Instead, their entire focus and energy is on saving as many lives of the herd as they possibly can.”

Producers, the directors added, “are upset about the criteria for eligibility, the reporting requirements, and the investment of time to fill out and submit the applications, only to be denied in the end.” Such was the case for Montana livestock producers who sought relief from the 2017-2018 winter. On their behalf, a waiver was requested by FSA leaders from Montana and surrounding states that would declare the 2017-2018 winter as an eligible disaster event.

A USDA fact sheet lists eligible loss conditions as an adverse weather event, disease, or attack on commercial livestock. The weather criteria is explained as “extreme or abnormal damaging weather that is not expected to occur during the loss period for which it occurred.”

Winter storms are then further defined as a weather event lasting for three straight days and "accompanied by high winds, freezing rain or sleet, heavy snowfall, and extremely cold temperatures.”

Such was the case in 2013, when Winter Storm Atlas hit western South Dakota – and some other surrounding areas – in a sudden snowstorm that trapped thousands of cattle in pastures ill-equipped for those elements. But that storm, an official familiar with the event explained to Agri-Pulse, qualified because of its startling and isolated nature. A restriction to individual weather events could prove challenging to livestock producers in cold-weather climates across the country. 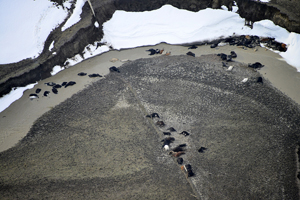 “Each application must document an eligible adverse weather event or eligible cause of loss and FSA can only approve applications that satisfy the eligibility criteria,” Brad Karmen, FSA’s acting deputy farm program administrator, said in an October letter to Montana FSA officials. “The broad designation or declaration you requested cannot be used to substantiate any individual application or groups of applications.”

While the farm bill may have been a logical vehicle to address this issue, that legislation has been signed into law with hardly any changes to LIP. One possible change that could tangentially impact the program is additional weather data coordination within USDA, but those provisions were written with drought in mind, not necessarily livestock disasters.

The debate and eventual rejection of the request, Montana FSA officials claim, has soured the relationship between livestock producers and the agency as well as the connection between state and federal partners. Montana’s congressional delegation sent a pair of letters to FSA urging a change of heart, and Montana FSA leaders say they “have received very little help” from federal FSA staff, and “we are hearing nothing but very negative feedback from individual producers.”

“Your denial of our request seems to say ‘Livestock producers in Montana, the FSA is very sorry that you experienced devastating losses this past winter but waiving our winter weather criteria under LIP would be more customer service than we are willing to provide. So, better luck this coming winter and have a nice day,’” a November letter from Montana FSA Executive Director Michael Foster reads. “I would safely guess that relations between FSA and livestock producers and their organizations in Montana are at an all-time low because of LIP.”

"FSA defers to the state's county committee officials who make their decisions based on established policy and regulations, which ensures a fair and equitable process for all producers," he said.

(Story updated at 2:00 p.m. to include Beam statement)