First, Johnson highlighted the sharp five-year drop in net farm income, noting “this is particularly important for anyone who started farming in the last 10 years or less because they started during a time when costs were high and soon prices were going to be declining.” Therefore, he says, “you’ve got net farm income that’s half of what it was five years ago ... so the strain in agriculture is very, very real from a financial standpoint.”

Putting the sharp drop in context, Johnson explained that not only is 2018’s $66.3 billion in net farm income down 49 percent from 2013’s $123.7 billion peak, but USDA projects net farm income remaining below $80 billion over the next 10 years.

Johnson pointed out there’s a clear cause for the stress: excess production, not only in the U.S. but globally. Proving his case with charts, Johnson noted production outpacing demand across the crop and livestock sectors.

Johnson pointed out USDA’s red-circled projections for production are “moving higher than what the market can absorb, and that’s why you see these 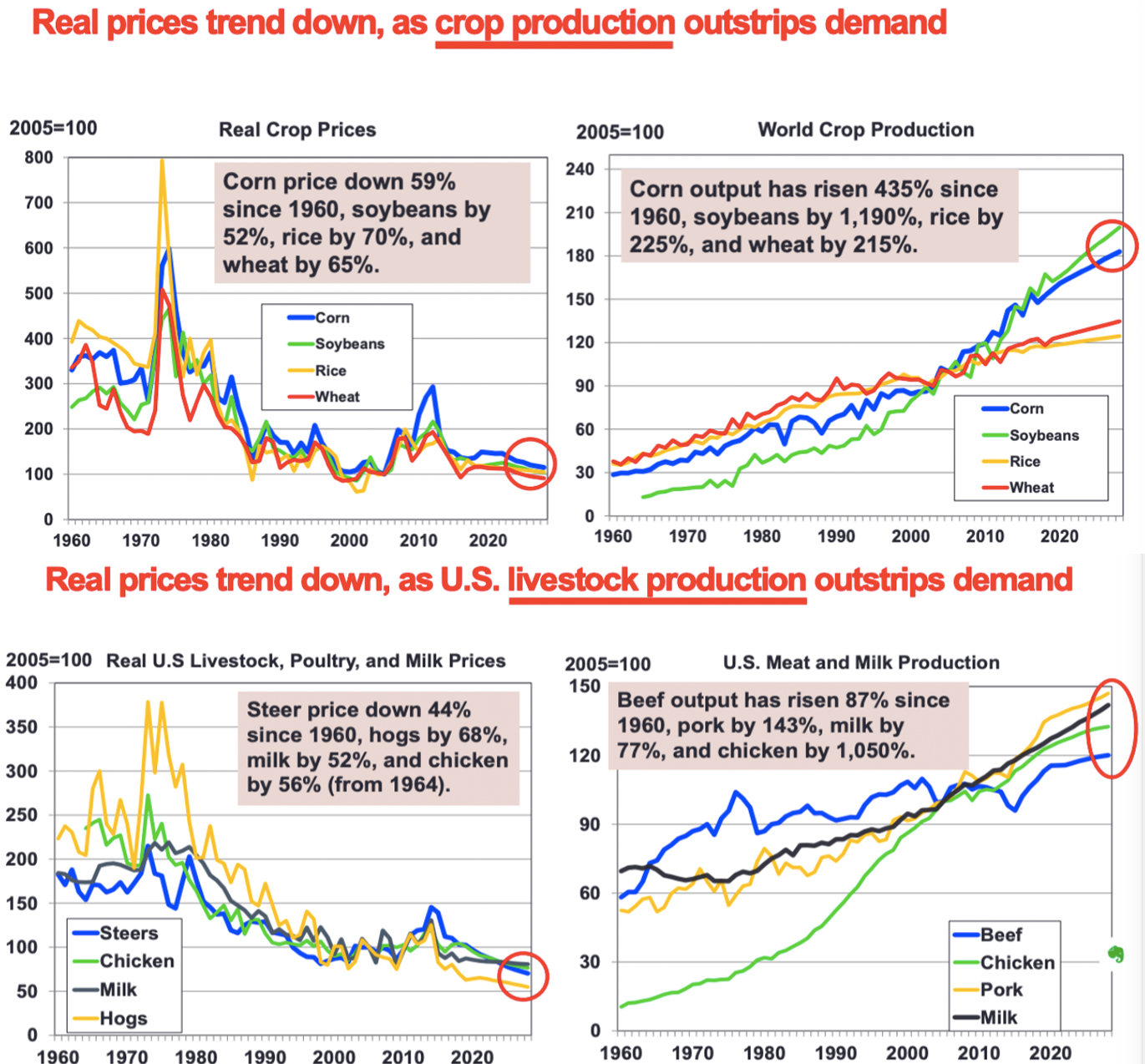 prices that are so very, very low.” He noted as well that unlike in the past, “we no longer have in farm bills any provisions to incent farmers to cut back production.”

While commending Congress on the December farm bill passage, Johnson said to restore balance, it’s time to go back to Congress to ask for “a little more ... to bolster the safety net.” He said Congress should “increase PLC (Price Loss Coverage) prices” because farmers “need a little more from the market and the market’s not going to deliver.” He said Congress needs to “start putting some of these tools back in the toolbox to allow us to incent farmers to cut back on production when we’ve got way too much of it in this country.”

Johnson went on to warn that along with the diverging price and production trends setting the stage for further stress, other negative factors include climate change, “extreme consolidation in agricultural marketplaces” reducing competition, and trade wars that threaten to result in “markets built over decades, lost overnight” thanks to “self-inflicted wounds that will be felt for a long time.”

NFU, student group pledge to address diversity in agriculture
Daybreak Nov. 9: Survey: Changing ag to address climate change not a priority for many

Johnson added while NFU agrees with President Trump’s goals on trade such as the importance of “holding China accountable,” NFU strongly disagrees on the administration’s tactics. He said he can’t understand why President Trump’s apparent approach is “to first deeply offend everyone you want to talk to” on trade issues and then expect a positive outcome.

Insisting that despite having an excellent team at USTR, “we cannot trade our way out of this problem” of excess U.S. production. Johnson added “we need some policies that address oversupply. We need to build biofuels. We need to do things that are going to suck up some of this surplus production.”

This need to address oversupply led Johnson to explain NFU’s determination to not only have EPA authorize year-around E15 ethanol sales, as then-candidate Trump promised during his campaign and subsequently, but also to promote E30, a fuel comprised of 30 percent ethanol.

Along with other convention speakers, South Dakota Farmers Union President Doug Sombke presented a strong case for E30. But in one example of how challenging it will be to promote E30 use, several NFU members in Sombke’s audience raised concerns about possible harm to engines and fuel systems from higher ethanol blends. Sombke rebutted the concerns, arguing they come directly from the petroleum industry and are not true.

In an interview with Agri-Pulse, Sombke said the challenge, even within the farm sector itself that directly benefits from ethanol production, is that it’s hard to counter the misinformation pumped out by the well-funded oil industry.

“Farmers need to be making money here; We’ve got to make good use of this pile of corn,” Sombke said. “We have proved that we can feed this country and fuel this country, so let us do it.”