Net farm income should increase by about 10 percent in 2019 but will still be well below the average level for the past two decades and far under recent peaks, according to USDA's latest forecast.

The projected increase for 2019 is good news for a sector that has seen mostly consistent drops since 2013, but a farm economist presenting USDA’s numbers said the sector may need to view that peak as an anomaly rather than an expectation.

“We’re starting to see a new average come out here, especially if you take out the really unusually high years around 2013 and 2014, then the value we’re forecasting for 2019 really isn’t that far off from what we’ve seen in previous years,” Carrie Litkowski, a senior ERS economist, said in an online briefing.

“Once we can get away from discussing what happened in those peak years of farm income,” she added, “our focus is going to be shifting away from that and start looking at income more relative to the years after the large uptick in net farm income.” 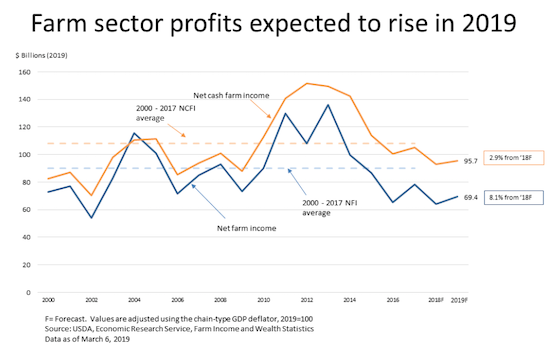 USDA: Nearly one-third of 2019 farm earnings due to subsidies, insurance
Farm income expected to rise in 2021, but so are expenses

The increase is largely driven by expected increases in crop and livestock receipts but offset by by a bump in production expenses.

Direct government payments are predicted to take a drop of nearly 17 percent this year, driven largely by drops in programs that pay out based on crop prices and lower Market Facilitation Program payments in 2019. According to ERS, MFP – the program designed by the Trump administration to offset the impacts of trade disputes on producers – will split payments between 2018 (about $5.2 billion) and 2019 (about $3.5 billion).

The projected net farm income estimate is sharply lower than the number in a long-term forecast released by USDA in February. Then, USDA anticipated net farm income topping $77.6 billion, which would represent a jump of about $14 billion over 2018. Wednesday’s release is based on more recent supply and demand information and was delayed due to the government funding lapse, ERS noted.

The forecast released Wednesday will be updated at the end of August.