It’s not competing pork producers in Europe or Canada who are the biggest threat to the U.S. share of Mexico’s market. It’s producers already in or moving to Mexico.

Mexican tariffs on U.S. pork — retaliation for U.S. tariffs on steel and aluminum — are making the meat the U.S. sells across its southern border expensive enough to create new competition from within, top officials with the National Pork Producers Council say.

The situation has put NPPC in a tough spot. The group, like most farm organizations, is a strong supporter of the current North American Free Trade Agreement as well as the renegotiated U.S.-Mexico-Canada Agreement, but the tariffs effectively nullify the benefits of either pact.

“The problem for us is that if these metal tariffs don’t go away, that’s the same thing as not having free trade in North America for us,” said Nick Giordano, an NPPC trade lobbyist.

And without free trade, the incentive to replace imported pork with domestic pork is growing.

“They have a growing herd in Mexico and very efficient producers,” said NPPC President David Herring. “They’ve been more profitable over the past five years than American producers.”

Even so, the U.S. exported about $1 billion worth pork to Mexico last year, making it the largest market by volume for U.S. producers.

“Trade works for U.S. pork producers … and Mexico has been a great customer,” said Herring, who is also a North Carolina farmer. “We probably export about 40 percent of our hams to Mexico. They like U.S. pork.”

Those sales came despite the Mexican tariffs that have been in place for nearly a year, but it’s not a sustainable situation in the long run, Herring added.

That’s because Mexican consumers also like cheap pork, and Mexican producers are already looking to expand, he said. The longer Mexico’s 20 percent tariff remains on U.S. pork, the quicker domestic producers will expand their operations, and the more U.S. producers will be tempted to set up shop south of the border.

NPPC members are already vocal about moving some of their operation into Mexico, Giordano said. “We’ve had producers discuss it with us.”

And Mexican operations are already world-class pork producers, so expansion is not unthinkable.

Private industry and government officials in the U.S., Mexico and Canada had all expected the Trump administration to lift the steel and aluminum tariffs last year when the leaders of all three countries signed the USMCA, but that still hasn’t happened yet. U.S. Trade Representative Robert Lighthizer has been in talks for months with Mexico and Canada on the issue, seeking quotas to replace the tariffs, but it's unclear if there has been any progress.

What is clear is that the Mexican, Canadian and possibly the U.S. legislative bodies will not ratify USMCA while the tariffs are still in place. 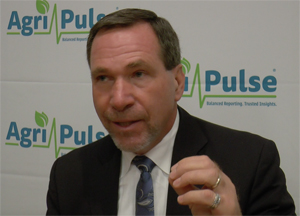 “From the Mexican point of view, I can tell you we will never dream of completing the USMCA … if that problem has not been resolved,” Jesús Seade, Mexico’s top North American negotiator, said recently about the steel and aluminum tariffs.

“All we can say is that we’re innocent bystanders and we have been for months and months. Our expectation … was that when (USMCA) was signed, the metal tariffs would come off and they're still on,” Giordano said. “This is a huge problem for us. If we don’t have (USMCA), we lose the Mexican market — whether it’s from metal tariffs that stay in effect or no USMCA and the NAFTA goes away, whatever. If we don’t have zero tariff trade with Mexico and we stay at 20 percent, we lose the entire Mexican market over time.”

President Donald Trump has threatened several times to pull the U.S. out of NAFTA, a threat that still hangs heavy over the U.S. ag sector because of the USMCA's uncertain fate.

It’s not just the loss of sales to Mexico that has NPPC officials concerned. U.S. pork producers are also bracing to lose market share in Japan after the country recently implemented two new free-trade pacts, neither of which included the U.S. Japan implemented the Comprehensive and Progressive Agreement for Trans-Pacific Partnership with several Pacific Rim countries in December and the Economic Partnership Agreement with the EU in February. Japan has already lowered tariffs twice for the EU and CPTPP countries, making U.S. pork more expensive and less competitive.

Said Giordano: “We’ve been the lowest-cost producer in the world on average for the past 10 or 15 years, but if our competitors have a tariff advantage that we don’t have — if we’re saddled with (a 20 percent tariff) indefinitely, selling into Mexico, and if we’ve got the CPTPP nations and the EU with preferential trade with Japan, it’s just economic logic that producers in this country … are going to start thinking about moving outside the United States. That’s just how economics works.”