The word “unprecedented” is thrown around quite a bit, perhaps so much that it has lost a little of its rarefied luster.

But make no mistake: the 2019 spring planting season is unprecedented. And the rate of acres that will never see a planter will be unprecedented as well.

Buckets of water have fallen on the nation’s corn and soybean acres, creating wet conditions persisting into late May. As of Sunday, less than half of the nation’s corn crop is in the ground, whereas under typical conditions, only 20 percent of it would still need to be planted.

“Everyone is scrambling,” Scott Irwin, an ag economist at the University of Illinois, tells Agri-Pulse. “We don’t have any data to predict what farmers are going to do … this is a one-time, new decision that farmers are facing on an unprecedented scale.”

In 2013, a record amount of acres qualified for prevented planting, which — as the name suggests — is the failure to plant an insured crop with the proper equipment by established final planting dates that vary throughout the country. That record — about 3.6 million acres —is what Irwin thinks is “probably what we should be using as the minimum expectation under these circumstances, and it could be a lot bigger than that.”

One state alone could have a chance at setting the record by itself, Irwin said. South Dakota, which USDA in March estimated would plant 6 million acres of corn in 2019, has just 19 percent of its crop in the ground so far.

“They’re probably not making much progress, if any, this week given what’s going on with the weather patterns, which means they are going to hit their prevent plant date — which is Saturday, May 25th — with somewhere north of 4 million acres eligible for prevent plant alone,” Irwin said.

Irwin and Arlan Suderman, INTL FCStone chief commodities economist, both said eligible corn PP acres could comfortably top 10 million, but much will be determined in the next few weeks. Parts of six other states will also hit their final planting date on Saturday, but more land has until May 31 or June 5 to be planted before considering PP an option.

There are a few qualifiers to consider. Just because an acre is insured doesn’t necessarily mean prevented planting is a better option than late planting of another crop or planting to a cover crop that cannot be hayed or grazed until after the beginning of November. Producers also have the option of haying and grazing the cover crop before that date in exchange for a reduced payment rate. For more information on the options, contact your local crop insurance agent or read our previous article: Replant? File for Prevented Planting? The options are complicated.

The situation may be hectic and confusing in farm country, but in recent comments to the media, USDA has sought to project an attitude of readiness.

A USDA spokesman took it a step further, saying “really, the only difference between this year and any other given loss year is that the scope is much larger for this particular situation with all the flooding and moisture.”

Barbre said there were “no changes” for this year’s PP regulations, “we just sort of dusted off our points to the companies and said ‘make sure you’re ready.’” 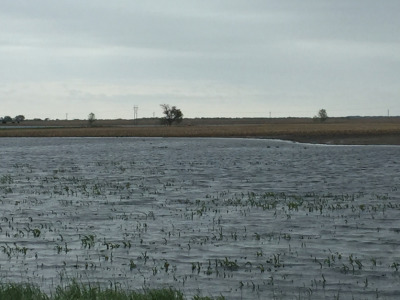 But that doesn’t mean PP will be without a little head scratching. Eligibility questions abound, as does the pondering that needs to be done to debate how a producer can address what is best for their operation given the bevy of options available. For now, USDA officials are encouraging producers to reach out to their crop insurance agents for questions about how to address their policy and their acres.

Despite all those questions, PP may be the only option for a number of producers, and it might not be a bad one.

“The market has not woken up to the fact that we’re experiencing something that, in (supply and demand) terms, is equivalent to a major drought, but we haven’t priced it that way yet,” he said.

Suderman said it’s hard to guess just what the final PP acre outcome will look like. A new record acreage is almost certain, but a boost to prices could prove incentive enough for producers to disregard the program altogether.

“If we rally this market another dollar, farmers will find some way to plant it with boats just to get it in the ground,” he said.