In 2006, two years into college, Sarah Barrett had a big decision to make. Either she continued her studies in agricultural engineering and biosystems or she returned to her parents’ farm in Brainerd, Minnesota, to help her father revive a struggling business.

Sarah chose to help her father, who not only was farming 2,000 acres of corn and edible kidney beans at the time, but he was also trying to build a business that specialized in the production of organic fertilizers for golf courses. To accomplish that, Mike was using a Wenger extruder he purchased used from Norway. The first thing Mike’s daughter did was to attend a training session in Kansas held by Wenger Manufacturing to learn more about the extruder.

“Little did we know the extruder was actually made to manufacture pet food,” says Sarah. “I was the only one at the training not making pet food. I also learned we had the top-of-the-line extruder.” Armed with that knowledge, Sarah returned to the farm and the father-daughter team immediately began the transition into manufacturing premium pet food.

During the Great Recession in 2009, Sarah’s brother Tom was laid off from his job at an aircraft manufacturing firm. He, too, chose to move back to Brainerd, but this time to help his sister grow the pet food business. And grow it they did. A co-packer with 105 employees, Barrett Petfood Innovations today manufactures 150 different dog, cat, reptile, bird, zoo-animal and other pet foods to customer specifications.

“They buy their packaging. We make the food, package it, and ship it to their distributor. We also do some private label,” Sarah says. “And if someone comes to us with a formula that is too expensive for the price point, we can help them with that, too.”

Today, pet food and treats manufactured by Barrett Petfood Innovations are sold in all 50 states and shipped to 20 countries. From 2009 to 2013, the firm saw year-over-year revenue growth of about 200 percent, which spurred their first expansion. Year-over-year growth again skyrocketed before slowing to 50 percent in 2018 due to capacity constraints. The company is now designing a second facility that it hopes to have operational in summer 2020. The expansion is expected to double production and employee numbers.

The pet industry is huge. According to the Pet Food Institute (PFI), nearly two out of every three households in the United States has a pet. Last year, people spent $72.6 billion on their pets, and not surprisingly, their biggest expenditure, about $30.3 billion, was spent on pet food, according to the American Pet Products Association (APPA). Americans have 184 million pet dogs and cats, 139 million freshwater fish, 18.8 million saltwater fish, 14 million small animals, 9.4 million reptiles, and 7.6 million horses, according to APPA’s 2017-18 National Pet Owners Survey.

“Many people don’t realize when they buy food for their dog or cat that a farmer grew the ingredients. I don’t think people realize how incorporated it is in agriculture,” Sarah notes. “Every grain in it comes from the farm.”

PFI members make 98 percent of all U.S. pet food and treats, operate in 31 states, employ nearly 30 million people, and have a total economic impact of more than $221 billion. “The ingredients going into pet food are going into high-value end use in packaged goods,” says Mary Emma Young with PFI. “While different grains will have different nutritional profiles, they can provide carbohydrates, protein, antioxidants and be a source of fiber. Grains can be an excellent part of a complete and balanced pet food recipe.” 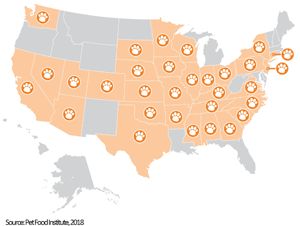 Not every grain or ingredient that goes into the pet food manufactured by the Barrett siblings comes from their father’s farm, but a lot of it does. The two businesses enjoy a flexible and mutually beneficial relationship, in which Mike can make more on his crops and Sarah and Tom can pay less for their ingredients.

“Commodity prices for corn and soy are so low right now. We are finding that we can pay our dad a small premium to grow other ingredients,” Sarah says. “We don’t have to pay freight, and we can control the quality of our ingredients.”

Garbanzo beans are a prime example of the synergetic relationship enjoyed by the two businesses. “Garbanzos need to be killed before harvesting. We can tell our dad not to use a chemical to kill them and to use saltwater instead,” Sarah says. This can be important to some of the firm’s customers from a marketing perspective because a recent study showed glyphosate, an active herbicidal ingredient, was present at low levels in a variety of dog and cat foods.

Because trends in pet food generally follow those in human food, Sarah says it’s important to be ready with new ingredients if their customers request them. “We are seeing ancient grains gain in popularity on the human side, and we are now transitioning to ancient grains,” she says.

More people are also looking to buy locally produced and natural foods for their pets. “I am constantly asking my dad, ‘Can you grow this? Can you grow that?’” By sourcing their ingredients locally, Barrett Petfood Innovations can offer some of its customers the option of marketing their products as local.

Currently, Mike is growing yellow peas, garbanzo beans, corn, and sunflowers (for oil content) for the pet food business. “Today, we use more than what my dad can grow. We have outgrown my dad at this point,” Sarah says. “But my dad saved us when commodity prices were very high. He kept us afloat for several years until we got on our feet. It works both ways.”

She notes that her father’s passion has always been farming. “When we were away at college and he was building the fertilizer business, I think in the back of his mind, he thought maybe he would build a bigger business that my brother and I could come back to,” she says.

Sarah, who owns Barrett Petfood Innovations with her brother and their parents, says she and her brother are more in tune with the pet business than their father. “We have dogs and cats and they live with us in our houses,” she adds. “My dad is a farmer; he grew up with yard dogs and barn cats.”