USDA plans to reopen continuous signup for the Conservation Reserve Program next week, despite demands by House Agriculture Chairman Collin Peterson that the department delay enrollment.

Peterson fears the continuous signup will steal acres from the general signup, which won’t take effect until December. Payment rates for continuous CRP acres are much higher than they are for general signup.

Enrollment for continuous CRP practices, which includes implementing practices like grassed waterways, filter strips, and wetland restoration, will begin June 3. General signup is not expected to open until, at the earliest, December according to USDA’s Farm Service Agency.

FSA Administrator Richard Fordyce told Peterson at a recent House Agriculture subcommittee hearing that the general signup was being delayed to give time for the agency to finalize new regulations required by the 2018 farm bill. He said it was not necessary to delay the continuous enrollment.

Peterson went so far as to threaten to sue the agency if it didn’t shut down the continuous signup.

Wildlife groups are concerned about losing acreage from CRP overall because of the delay in the general signup, which likely means the new contracts won’t be enrolled in the program until October 2020, they say. 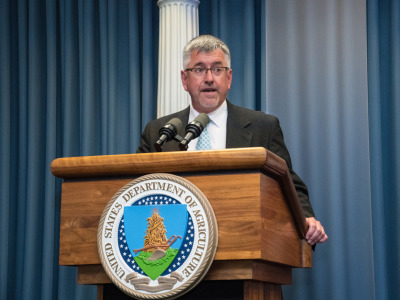 “A general signup would clearly help show the demand and get the most acres enrolled the quickest,” government affairs director, of Pheasants Forever, Jim Inglis tells Agri-Pulse.

“We think there is a high demand for the program, but we really don’t know because farmers haven’t had a chance to really enroll at this point.”

The last general signup for CRP was December 2015.

Inglis said if FSA operates the general signup from December to February, CRP enrollment may fall as much as 7 million acres under the cap next year.

“So, the problem is everything is snowballing here,” Inglis said. However, he doesn’t feel the continuous signup will take away acres from the general because only 295,000 acres were signed up last year.

Aviva Glaser, agriculture policy director for the National Wildlife Federation, says continuous signup is unlikely to reduce the general signup significantly, since it will not include incentives for enrollees and doesn’t cover all eligible practices. “I think we can expect there to be fairly low demand,” she said.

Fewer than 300,000 acres were enrolled during the continuous signup in fiscal 2018, the lowest such continuous enrollment since 2004, she said.

There are currently 432,526 continuous contracts covering 7.9 million acres with payments averaging $134 per acre, according to FSA’s April 2019 report. Some 167,162 contracts spanning 13.5 million acres are enrolled in general CRP with an average payment rate of $51.97 an acre.

Peterson argues that acreage enrolled under continuous contracts does “almost zero good for wildlife.” The only thing that does, he said, is bigger tracts of CRP which can only be done in the general signup.

“We need large blocks of habitat that will help grassland birds, pheasants, quail, and even pollinators,” Inglis said.

In order to be eligible for continuous signup, land must be cropland planted or considered planted to an agricultural commodity four of the six crop years from 2012 to 2017. The land must also be physically and legally capable of being able to plant a crop.