Strawberries: A crop of opportunity for Mexican-Americans

While Americans for decades have called fruitlessly for policy reform on immigration, families of Mexican heritage have achieved a fruitful entry to farming and shipping strawberries in California.

The ranks of Hispanic strawberry growers are rising in Florida as well.

“We’ve seen over the past century that strawberries have been a crop of opportunity,” says Carolyn O’Donnell, marketing director for the California Strawberry Commission (CSC).

Jesus Alvarado, 58, says strawberries have been part of his life for a half century: “When I was a young kid over in Mexico, I started harvesting berries every weekend.” A few years later, he was going to night school, “and in the morning I would work on strawberries.” By 1998 he was able to secure land and start his own strawberry farm, which he and his son, David, now manage near Salinas, Calif. 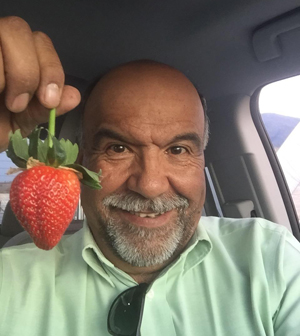 O’Donnell says the very nature of strawberry farming has fostered the trend toward Hispanic operators over the past half century. “Strawberries are a hand-planted, hand weeded, hand harvested crop,” she explains, and that isn’t likely to change soon because “it’s been really difficult finding the machinery that has the optics to identify a ripe strawberry from a partially ripe strawberry, from a leaf, from a blossom, then grasp that berry from a plant without bruising it and without damaging the plant.”

What’s more, she notes, farms need workers all year and statewide. Fields are prepared for planting a winter crop already in late summer, and the summer crop is planted in November, then weeded and managed to harvest, which occurs from April through October most years in the main California production region.

So a throng of fieldworkers has always been essential to farming strawberries in California, which produces 90 percent of U.S. commercial production, according to USDA. Florida’s big winter crop, harvested through March, accounts for most of the rest.

“Becoming a strawberry farm takes some time,” O’Donnell says. Many of the Mexican families “started with their brothers and sisters on a couple of acres, because you can produce a lot of fruit on a very small amount of land … (and) you can pool enough resources to get started.”

That’s true only, of course, if there are people available to help grow strawberries.

Both California and Florida strawberry growers have faced a worsening shortage of workers for several years because of the tightening workforce nationally and stricter immigration enforcement at the southern U.S. border.

Alvarado, a Mexican immigrant himself, produced 80 acres of strawberries just four years ago, and he’s been forced to phase down to 40 acres because of the worker scarcity.

He says about 60 harvesters, plus about 15 other irrigators, tractor and truck drivers, foreman, quality inspectors, and others are needed on his farm through the spring and summer months of production. When he was growing 80 acres, the total workforce was about 150, he says.

Over the years, “my goal was 100 acres,” and he was on track, converting some of his fields. Worker scarcity has forced his retreat, Alvarado says.

Peter Navarro, a veteran grower in the Watsonville area, says the lack of workers has also forced him to cut back sharply, to about 50 bearing acres. Navarro, who farms with a brother and sister and serves on the CSC board, says Navarro Farms employed up to 150 people a few years back; now, fewer than 90.

Meanwhile, Dave Murray, a large producer and partner in Andrew & Williamson Fresh Produce, with production in Mexico and California, says he’s “had to modify our system” to deal with the shortage.

Murray has been using the federal H-2A foreign guest worker program “to a greater extent every year for about the last three or four.” Visas are secured for many of the winter-crop workers in the Fresh Produce locations in central Mexico and Baja California, who then come to the California fields for spring and summer. (Growers in central Mexico export most of their winter crop to the U.S. and together with shipments from Chile account for at least a sixth of the U.S. annual supply.)

Besides labor intensity, the location of California’s strawberry growing region helped sculpt the industry’s economic profile. Nearly all of the state’s production is in the coastal counties from just north of Los Angeles to the Monterey Bay area south of San Francisco.

“People like to live where strawberries like to grow,” O’Donnell says, and that makes land there very pricey. So much so, she says, the labor intensity and high land costs have restrained strawberry farm sizes, and “most farmers don’t own their (fields) anymore.” They rent most of their acreage.

The result is a few big growers and a bevy of small and midsize strawberry farms. USDA's 2017 Agriculture Census numbers put the average for California at 55.9 acres, and O’Donnell estimates that growers who contract their crop with shippers most often have about 60 to 80 acres.

Ag Census data also puts the average Florida strawberry farm at about 50 acres. But Kenneth Parker, executive director of the Florida Strawberry Growers Association says there are probably fewer than 65 farms marketing strawberries commercially in Florida, and their size averages about 150 acres.

Parke says that, unlike the California trend to leasing, most Florida strawberry farms own the land under their crops, and they rotate their fields for spring crops — cantaloupe, melons, eggplant, etc. — harvested through May. 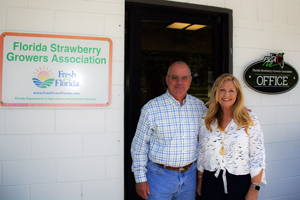 Sue Harrell, FSGA marketing director, explains that most strawberry growers “partner with a shipper to ship under their label … and don’t necessarily have their own name on the package.”

Like their California peers, Florida’s strawberry farms are almost all “multigenerational family farms,” Parke says, and “most of the Hispanic families who are farming started by picking strawberries.” Plus, the tally of Hispanic among growers is also rising in that state, where nearly all of the crop is grown east of Tampa Bay in Hillsborough County.

Florida’s Hispanic growers are also typically from Mexico, and Parker says “their first generations are still involved” in their Florida operations. The percentage with Hispanic heritage? “Years ago it was zero,” Parke says, “and they are 10 percent of our production now.” He notes one, Hilda Castillo, who has an average size farm, is an FSGA director.

Peggy Parke manages all packing and shipping operations for her and her husband’s Parkesdale Farms near Dover (Hillsborough County). She calls their operation, with about 500 bearing acres, “midsize,” and she says two Hispanic growers have linked up with her to pack and ship jointly to Red Blossom, a major berry marketer.

But while her shipping partners may be from Mexican-American families, her major competition is the growers in central Mexico, who start exporting their winter strawberry crop about Jan. 1.

Parkesdale planted early last fall and began harvesting in early November. “We get a bit of a window (through) December,” she says, “and we always say, ‘December’s our month to make money,'” and then Mexican crop flows north, pressuring U.S. market prices, she says.