After decades of robust expansion, America’s farmers markets are sharing much of their growth lane with farmers’ other direct marketing channels.

The number of farmers markets registered with USDA nearly doubled in a decade to almost 8,700 in 2016, but the yearly tally leveled off and remains under 8,800 in the 2019 preliminary total just ahead of August's National Farmers Market Week.

However, that doesn’t mean the throng of farmers making direct sales of their products, and the value of such sales, are stalling out.

In fact, USDA’s 2015 Local Food Marketing Practices Survey (its most recent) results found 166,000 U.S. farmers sold food locally through direct marketing practices that year, ringing up $8.7 billion in receipts (one-third by California farmers). That was up from 136,000 farmers and just $1.2 billion in sales, in 2007.

Still, only 35 percent of the 2015 direct marketing receipts were in retail sales directly to consumers, and that category includes roadside stands, on-farm stores along with the farmers markets. The remaining two-thirds of farmers’ direct local sales went straight from farms to supermarkets and other food stores, restaurants, institutions, food co-ops and such.                        Source: USDA 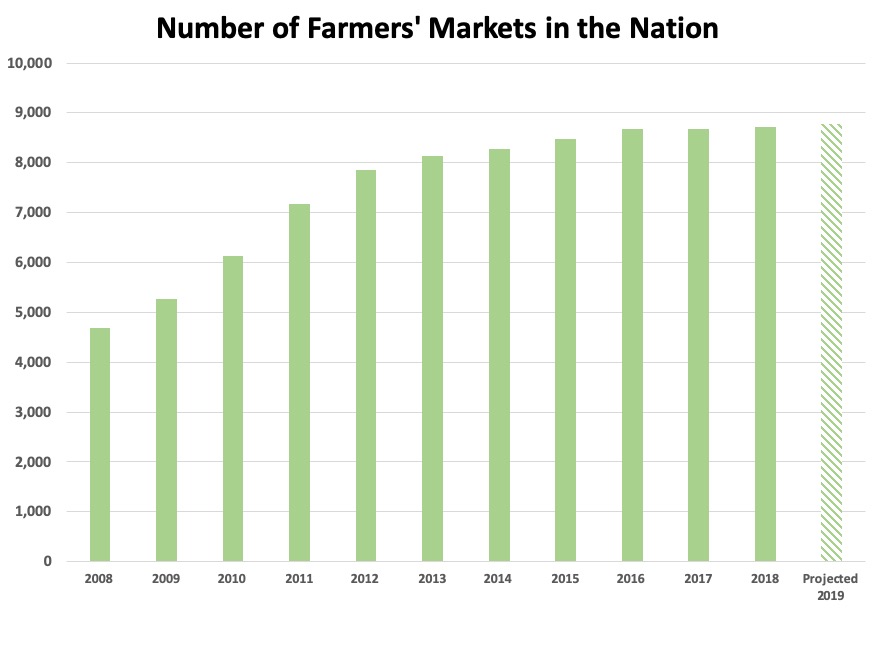 “There are a lot of factors at play in our food system,” says Ben Feldman, interim executive director of the national Farmers Market Coalition, based in California.

“For quite a long time, farmers markets had this tremendous growth,” Feldman said. “That really led many other retailers to look at them flourish and take a page from the farmers markets playbook, going after farmers themselves directly for fresh produce and other foods for their shelves and food service kitchens.

“Farmers markets have largely been responsible for many of the changes we’ve seen in people’s expectations for their food and the ways in which people get their food,” he added. “For example, the idea that people can understand how their food is … produced and who raised it (and) … the way people look for fresh, healthy food. Those things weren’t as much on most consumers’ minds 30 years ago,” he said.

Which marketing path farmers use is of no concern to FMC, Feldman says. “We’re exactly about making that direct connection between farmers and consumers … whether in the frame of a farmers market … in a CSA, or when a farmer delivers to a house. We don’t see other types of direct (farmer) sales competing with what we do.”

On the other hand, he says, “the farmers market is the face of agriculture to many urban Americans. The social interaction … the ability to learn directly from the farmers, is something that farmers markets have that other retail outlets don’t.”

So how successful are farmers markets these days?

The whole gamut of farmer direct sales, it’s important to remember, is just a thin slice of American farmers’ marketplace: the $8.7 billion total for 2015 represented just 2.3 percent of the $377 billion in U.S. farm cash receipts that year.

Nonetheless, farmers markets are growing and have a bevy of things going for them beyond that personal farmer-to-consumer contact at a veggies or fresh meat or dairy booth.

Urban agriculture is helping. USDA’s 2015 survey found a majority of farms marketing food directly were located in metropolitan counties, and 67 percent of direct food sales were from farms located in metropolitan counties. With the flurry of roof-top and high-rise produce operations, and compact hydroponic produce operations popping up in urban areas, that share has been on the rise, bringing production of food in closer to consumer-dense urban farmers markets. USDA officials hope to repeat the direct marketing survey next year.

“There is certainly a trend in LA County for trying to recruit more local farmers” to produce for the farmers markets there, says Jackie Rivera-Krouse, supervisor for four Santa Monica, Calif., city-owned farmers markets.

But space for food production just isn’t available in Santa Monica, an ocean-side LA suburb of pricey real estate, explains Rivera-Krouse. So she says nearly all farm products coming to the markets in Santa Monica, are still trucked in by “long-term farmers” in nearby counties — Santa Barbara, Ventura, Tulare — and “more rural parts of LA County,” she says. Other LA-area market managers agree.

Popularity of farmers markets in urban cores surged about a decade ago to remedy inner-city “food deserts” in urban areas and respond to a national childhood obesity crisis. Now, the venues have addressed those issues and also bolstered demand for direct access to fresh farm crop and animal products. 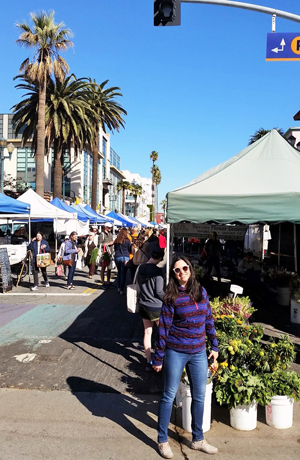 “We must do more to halt and reverse this epidemic” that has “nearly one in every three of America's children being overweight or obese,” former President Barack Obama declared in launching federal government efforts in 2010 to help families, communities and school food programs access more fresh local produce to ensure healthier diets.

A big response to America’s unfit diets: bonuses and tokens, added to electronic benefit transfers (EBTs) that Supplemental Nutrition Assistance Program recipients can redeem at food stores, farmers markets or in direct purchases from farmers set up to redeem SNAP benefits. They double SNAP benefits but must be spent on fresh produce.

“They started with philanthropic dollars, by and large, and in farmers market settings,” says Feldman of FMC, “and they were tested in different (farmers market) locations, and the results sort of spoke for themselves.”

With support from healthy-foods-minded philanthropic entities such as Wholesome Wave, FFN has helped other communities offer the SNAP bonuses. It now sponsors the bonuses at 100 groceries and 150 farmers markets and Michigan, and serves DUFB partners in 27 states, she says.

Congress weighed into the bonuses idea with the 2014 farm bill, budgeting $20 million annually through 2018 for the Food Insecurity Nutrition Incentive (FINI). Then it upped the ante last year to $50 million annually, renaming the program GusNIP (after the late Gus Schumacher, a longtime advocate for Wholesome Wave, FINI, and other programs to get more fresh produce to low income people).

The bonuses have very high redemption levels. Parker says that, at DUFB’s 250 Michigan sites, the bonuses have been redeemed on a full three-fourths of $20.2 million bonus-qualifying SNAP benefits issued since the program started there.

In northern Virginia, west of Washington, D.C., a volunteer conducting EBT transactions this month for SNAP recipients at the Herndon Farmers Market says the mechanics of the system are “pretty easy.” Mia Merin, with Herndon-Reston FISH, a local charity group, redeems SNAP benefits with an EBT devise and awards an equal value of bonus tokens.

“Before they start buying, they say if they will spend $10 or $20 (in SNAP benefits),” then they’re given SNAP token plus free bonus tokens, redeemable for fruit and veggies at the market, Merin says. “The vast majority of customers want just fruits and vegetables … and it’s up to the vendors if they want to participate,” she said.

As with DUFB, the SNAP bonuses in northern Virginia began with private contributions — in this case, members of the Dulles Chamber of Commerce, such as INOVA, a health care system. Then, in the past couple of years, bonuses at Herndon and several other markets in that area have also been supported by a FINI grants to Virginia Fresh Match and other nonprofit groups.          Source: USDA 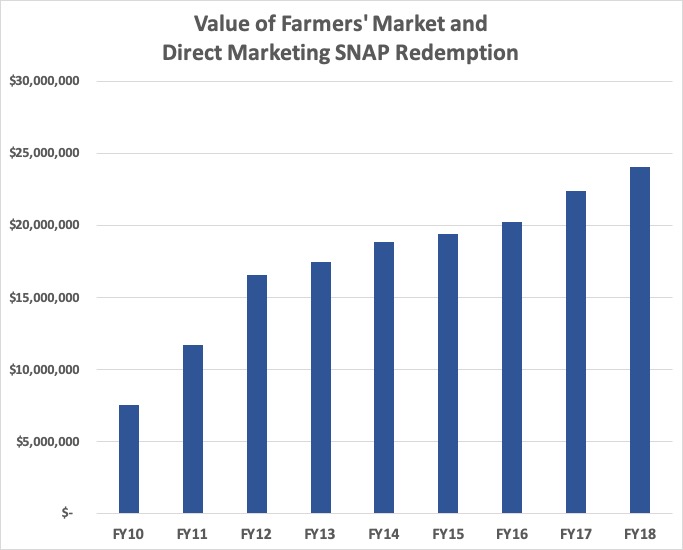 Note that under 2 percent of SNAP dollars are spent at farmers markets and farms authorized to make EBT transactions. Yet more than 7,200 of those markets and farmers are now making redemptions, according to USDA reports.

Still, the bonus programs have “a pretty significant impact” overall, says Feldman. “For some farmers markets, without these programs, the markets wouldn’t be able to continue to operate,” he says.

Cities and metro areas counties are weighing in, too, legislating new accommodations and assistance for farmers markets and urban agriculture in recent years.

Cincinnati, for example, will soon complete a streamlining of policies and zoning changes to promote and accommodate urban agriculture, including the keeping of farm animals in residential areas (based on building density and lot size), establish community gardens, and so forth.

Birmingham, Ala., meanwhile, recently passed zoning changes to encourage community gardens, easier siting of roadside food stands, and so forth. Other cities and counties have made similar moves, expanding freedom in locating farmers markets and allowing their year-round operation.

What’s more, another arm of USDA, the Agricultural Marketing Service, will dole out $11.5 million this summer in annual Farmers Market Promotion Program grants aimed at new and expanded infrastructure for farmers markets and direct farm sales.