State lawmakers will soon be casting final votes on a labor bill with sweeping repercussions for California agriculture. Assembly Bill 5 would affect about 2 million workers across industries. Among the most impacted would be at least 70,000 small trucking companies throughout the state – a large portion of those being independent truckers who seasonally haul produce and livestock across the state.

The bill has grabbed headlines for how it targets Uber, Lyft and other large gig economy businesses. AB 5 would reclassify as regular employees the independent contractors who account for much of the workload at these tech companies.

Ag groups opposing the bill say growers would be collaterally impacted. For an owner-operator to convert to an employee of the farmer, he would have to give up use of his own truck, as well as the freedom and flexibility that comes with being an independent contractor. Trucking firms, meanwhile, already prefer to hire drivers as regular employees, but demand is so great that they must hire owner-operators to make up for the worker shortage.

“These are the trucks and the owner operators that fill in those gaps that happen when you have a surge in needs, whether it’s a construction project or whether it’s a harvest,” said Greg Hurner, a political consultant for the California Truckers Guild. “The rice industry says that over 70% of their harvest is done through owner-operators.”

Hurner was speaking in Sacramento on Tuesday, under a blazing afternoon sun and as truck horns blasted in the background from owner-operators circling the capitol in demonstration. Hurner had also discussed the issue that morning with Senator Susan Rubio, D-Baldwin Park, along with representatives from the rice industry and the California Farm Bureau Federation.

The bill’s author, Assemblymember Lorena Gonzalez, D-San Diego, has been individually negotiating exemptions for specific industries, such as licensed beauty care workers and emergency room doctors. Others still seeking exemptions are travel advisors, interpreters and real estate agents. Yet Gonzalez has singled out truckers in her arguments at the Legislature, blaming those companies for exploiting workers through independent contracts. She said the problem of misclassifying workers was “largely created by the trucking industry.”

Gonzalez, who was a labor organizer before taking office in 2013, already has a beleaguered reputation with the ag community from her bill that established California’s “ag overtime” law. Her 2016 measure narrowly passed the Assembly floor by eight votes before being signed by then-Governor Jerry Brown. The state began phasing in the new overtime limits in January.

On the Assembly floor in June, Gonzalez promoted AB 5 as saving impoverished workers from abuse while also helping businesses by narrowing the broad decision of the California Supreme Court last year. Known as the Dynamex decision (pronounced “dynamics”) for the courier service involved, the court case put the spotlight on a dated labor code.

Senator Brian Jones, R-Santee, has said the Dynamex case “might go down in history as one of the worst decisions that court has ever made.” 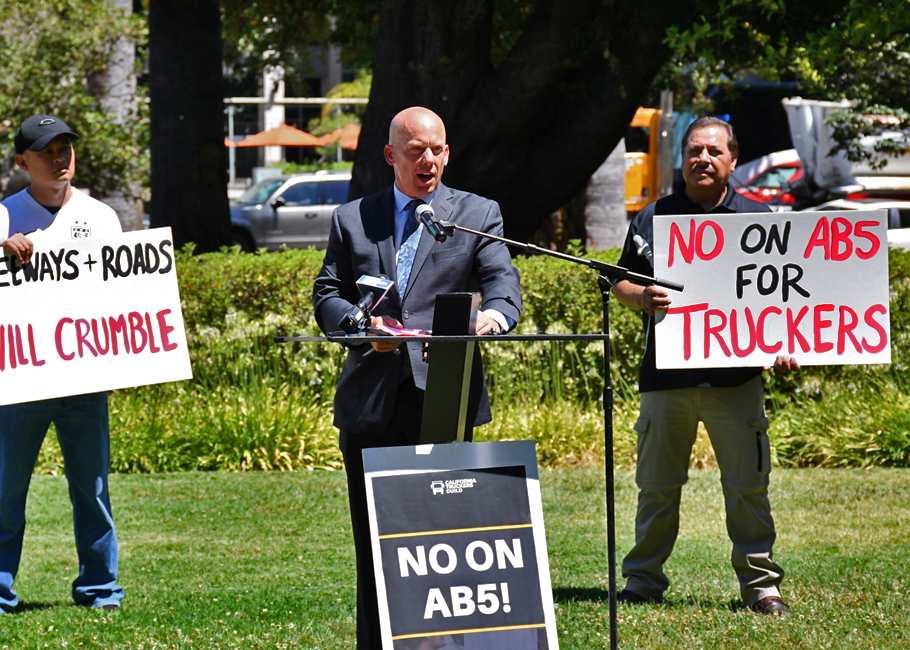 Greg Hurner, with the California Truckers Guild, speaks at a rally against AB 5.

The court’s ruling required employers to follow a three-part ABC test. An independent trucker would need to be free from the direction of a farmer, perform work outside of the usual farm business and be engaged in the “independently established” trade outside of the contracted scope of work.

The ABC test replaces the “Borello” standard, which sprouted from a 1989 California Supreme Court case involving a cucumber farmer. The court had ruled the grower must classify farmworkers as either standard employees or independent contractors, and not under the traditional “sharefarmer” agreements. If the current ruling goes into effect without legislation narrowing its scope, the new ABC test could impact a broad range of seasonal workers in agriculture.

“The ABC test is a significant challenge for growers,” said Michael Miiller, director of government relations for the California Association of Winegrape Growers (CAWG). “If there’s any work that you are contracting out for that is the principle work of the business, that worker could be an employee. That could be trucking, pest management, a variety of things.”

Following the Dynamex decision last year, the California Truckers Association (CTA) filed a lawsuit alleging the ruling preempts federal law. The Western States Trucking Association is also suing. Both lawsuits are ongoing, which creates sensitivities around how lawmakers and associations publicly engage with the law.

CTA has not been in full opposition to the bill, as it is seeking amendments. CAWG has joined the CTA coalition, along with ag groups representing food processors, egg farmers and almonds. The California Chamber of Commerce has led the opposition for several business groups as well. Labor groups, mainly representing construction workers, are in support of the bill.

CTA has pointed to reports by the California Employment Development Department showing that 92% of the trucking companies in California operate five or fewer trucks. These companies often begin with one owner-operator working as an independent contractor, who then builds the business by hiring other independent contractors. CTA notes that owner-operators constitute as much as 20% of the trucking industry nationwide.

CTA and assemblymembers opposing the bill have asked for an amendment to add broader exclusions for business-to-business transactions. In response, Gonzalez said, “Nothing in Dynamex or in law will prevent 1099 interactions,” adding that the contractor-subcontractor relationship will not change.

Senator Brian Dahle, R-Bieber, runs a trucking business for his seed farming operation and voted against AB 5 when he was in the Assembly.

“We harvest our crops and we need to get them out by a certain time before the weather changes,” he said during arguments on the floor. “Unfortunately, I'm in the trucking business because I couldn't get trucks when I needed trucks to move my commodities.”

He pushed for a small business exemption and worried the law would apply retroactively, which is how the U.S. Court of Appeals for the Ninth Circuit interpreted the Dynamex ruling in May.

“Under the Borello law, we assumed we were doing the right thing,” said Dahle. “There are a lot of us who work tirelessly to obey the laws, and they change rapidly around here. Trying to keep up with them as a small business owner is very difficult.”

During a hearing on the bill, Gonzalez said she is committed to working with the trucking industry and does not want anyone who has invested $100,000 into a truck to not be able to use it – a factor her office may be considering for an exemption, according to sources. But Gonzalez cautioned the bill is “a work in progress” and it may take years to resolve the issues truckers have with the bill and with the Dynamex decision. She acknowledged this is “probably the most difficult issue” she has tried to deal with as a legislator.

“If we make exemptions for independent owner-operators, we have to be clear that we're not just providing another avenue by which companies can continue to basically prevent workers from having a sustainable life,” she said.

In a letter opposing AB 5, CTA CEO Shawn Yadon notes the coalition has been seeing progress in the negotiations and he hopes to see amendments soon.

AB 5 passed its first vote on the Assembly floor along party lines, though one moderate democratic joined the 14 republicans in opposition. On Monday, Senate Appropriations placed the bill in the suspense file, adding up to three more weeks for negotiations and potential exemptions.

During that committee hearing, the Legislative Analyst’s Office testified that the bill would cost the Department of Industrial Relations at least $2.2 million initially and another $2.1 million annually, while pulling an additional $2.5 million from the unemployment fund as the bill is implemented. The employment department said the bill would increase its workload by 20%, at a cost of up to $2.9 million annually. Costs to the state would likely be much higher as trade groups are expected to file a number of lawsuits if the bill passes.

The committee has until the end of August to vote on the bill. If approved, AB 5 would be subject to final votes in both the Senate and the Assembly before reaching the governor’s desk. It is still to be determined how the administration views the bill. Newsom has benefited from strong support from both the tech industry and labor unions.