The Agriculture Department sharply increased commodity payment rates for its 2019 trade assistance package, boosting the corn rate by 14-fold and quadrupling cotton’s, based on USDA's higher estimates of trade damage that farmers have suffered.

The 2019 rates covered by the Market Facilitation Program are based on USDA’s calculations of the economic impact of retaliatory tariffs and other trade barriers going back 10 years. The 2018 rates were based on the impact of tariffs imposed that year, and payments were provided for a more limited number of commodities.

Soybeans received one of the smallest increases in MFP rates, rising from $1.65 per bushel in 2018 to $2.05 per bushel for the 2019 program, according to a nine-page methodology paper  that USDA's Office of Chief Economist released Friday. Soybeans had the highest 2018 payment rate by far, reflecting the impact of China’s retaliatory tariffs on soybean trade.

Corn received the greatest increase in this year’s program, going from a penny a bushel in 2018 to 14 cents a bushel this year.

USDA had earlier released the county payment rates for the 2019 MFP, but didn’t disclose until Friday the calculations for individual commodities that were used to compile the county numbers.

“We listened to feedback from farmers on last year’s programs and incorporated many of those suggestions into today’s programs,” said Agriculture Secretary Sonny Perdue .”While no formula can be perfect in addressing concerns from all commodities, we did everything we could to accommodate everyone.”

The program was substantially changed from 2018, when farmers received MFP payments based on their production that year times the payment rate for the eligible commodities. 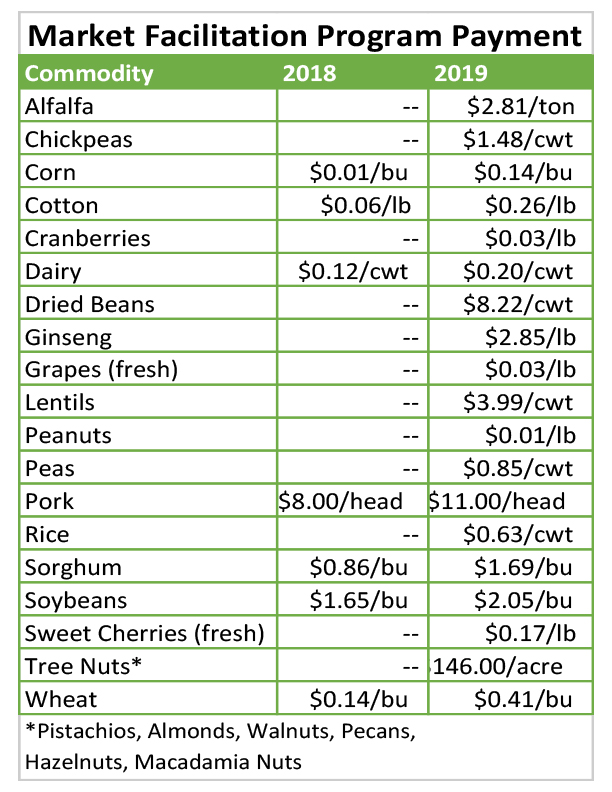 For 2019, payments for row crops are based on the farmer’s planted acreage of eligible commodities times the county rate. Prevent plant acres that were seeded to an approved cover crop are also eligible for payments at a flat rate of $15 per acre, under the 2019 program.

The county rates were calculated according to the average acreage of each eligible crop from 2015 through 2018, times the average yield during that period, times USDA’s commodity-by-commodity calculation of trade damage, which is $2.05 per bushel in the case of soybeans, for example.

USDA's methodology paper listed several tariffs imposed in 2018 that were included in the calculations but didn’t provide detail on past trade barriers that were considered or on how the various tariffs and trade barriers led to the individual commodity rates.

“The 10-year period for determining a basis for evaluating the tariff allows estimates to account for other contributing variables, such as longstanding trade barriers imposed by China and other countries that have affected U.S. exports, as well as the longer-term impact of prolonged retaliatory tariffs,” the paper said.

Recent developments that figured into the 2019 calculations included retaliatory duties imposed by Turkey in May in response to U.S. steel and aluminum tariffs. In June, China increased retaliatory tariffs on nearly $2 billion of agricultural goods by an additional 5 to 15 percent, and India imposed retaliatory tariffs ranging from 2 to 25 percent on U.S. apples, rice, almonds, chickpeas and other commodities.

Lynn Chrisp, president of the National Corn Growers Association, said his group “welcomes USDA’s transparency in this process. Corn farmers were understandably disappointed by the one cent per bushel for corn in the first MFP program and we appreciate that it appears USDA considered our recommendations in developing MFP 2.0.”

Payments under the new MFP are varying widely by county depending on the mix of crops grown there, from the minimum $15 per acre to the $150 maximum. Some 22 counties  will receive the maximum payment: Five counties each in Alabama, Georgia, and Texas; Three counties in Mississippi and Arizona, and one county in New Mexico.

Additional specialty crops were added as well, and USDA provided its estimates of the trade damage they suffered.  Payments for specialty crops are based on 2019 acreage.

The 2019 MFP rate for tree nuts was set at $146 an acre based on estimated trade damage of $318 million. Sweet cherries have a payment rate of 17 cents a pound based on a trade damage estimate of $111 million.

As of this week, about 200,000 farmers had applied for payments under the new MFP.