Buoyed by the Trump administration's trade mitigation payments, U.S. farm income is expected to increase for the third straight year, but still will not come close to its 2013 peak. 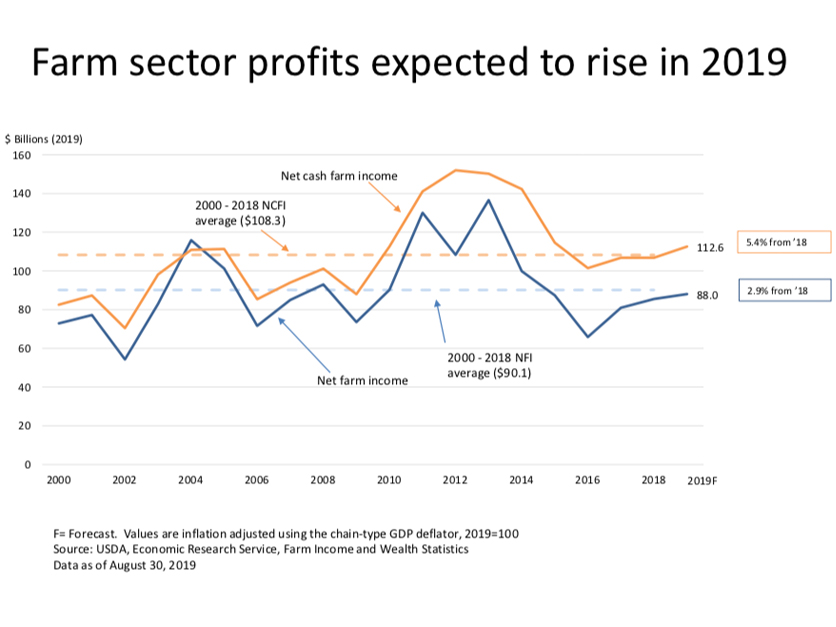 Go here for the charts used in the webinar

USDA allocated $14.5 billion in MFP trade mitigation payments for this year, a substantial increase from 2018 payments that so far stand at about $8.59 billion, according to USDA.

The total of $19.5 billion in direct government payments estimated for this year includes $13.1 billion in MFP payments, $3.7 billion for conservation, ND $2.8 billion in commodity income-support payments.

Crop cash receipts are forecast at $193.7 billion in 2019, a decrease of $3.3 billion (1.7%) from 2018 in nominal, or unadjusted, terms. “Lower receipts for soybeans and cotton are expected to more than offset higher receipts for wheat and vegetables and melons,” ERS said.

ERS estimates that total production expenses (including operator dwelling expenses) will stabilize in 2019.

“Spending on feed and hired labor is expected to increase while spending on seed, pesticides, fuels/oil, and interest are expected to decline,” ERS said. “After adjusting for inflation, total production expenses are forecast to decrease $4.6 billion (1.3%).”

Observing that this is the fifth straight year of declining expenses, Litkowski said, "We haven’t seen a decline of this duration or magnitude since the farm crisis of the 1980s."

Overall, Litkowski said the “balance sheet remains strong,” but also pointed to increasing debt. While farm sector equity is expected to increase 1.8%, unadjusted for inflation, ERS said “most liquidity measures are expected to weaken, with working capital levels forecast down 18.7% to $56.9 billion.

An ERS chart showing rising debt-to-asset and debt-to-equity ratios notes the ag sector’s “risk of insolvency [is] at its highest level since 2009.” But the likelihood of default is also “historically low.”

ERS expects soybean receipts to fall in 2019 by $5.7 billion, or 14.3%, “reflecting anticipated declines in both price and quantities sold.”

Corn receipts are forecast to fall $200 million (0.4%) in 2019 because of a decrease in the amounts sold, while cotton receipts are expected to fall by $600 million, or 7.4%, reflecting “expected decreases in cash receipts for upland cotton lint and extra-long staple (ELS) cotton lint.”

Receipts for wheat are forecast to increase almost $700 million, or 7.5%, from 2018, “reflecting an increase in quantity sold alongside a slight price decline,” ERS said.

More rice sold will translate into a $100 million, or 4.5%, increase in cash receipts, ERS said.