The Trump administration’s trade assistance payments have become so critical to farm profits that many growers could take a hit to their income if the program is discontinued in 2020 because of a trade deal with China.

In 2019, the $14.3 billion in Market Facilitation Program payments combined with other federal subsidies to account for nearly one-third of net farm income, according USDA’s Economic Research Service.

For many farmers, the MFP payments were the difference in covering their costs. In Illinois, for example, MFP payments will account for 11% of total gross revenue on Illinois grain farmers this year, according to University of Illinois economists. Government payments haven’t accounted for that large of a share of gross revenue in Illinois since the early 2000s, they said.

“Without MFP payments, average farmer returns would be negative in 2019, and far below any level since consistent records began in 2000,” the economists wrote.

So what will happen if MFP isn’t repeated in 2020? After all, MFP payments this year are projected to push net farm income to $92.5 billion, well above levels before the trade war with China erupted in mid-2018. That’s also above the inflation-adjusted $90 billion annual average net farm income since 2000. 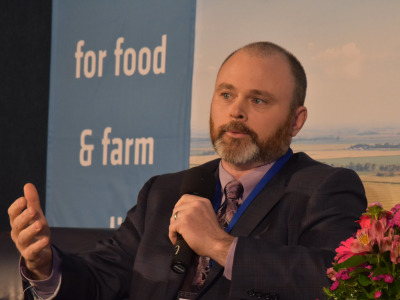 “Commodity farmers are in for a tough year next year by all accounts, but tougher without more MFP and no return to normal with China,” said Jonathan Coppess, a University of Illinois policy analyst who served as administrator of the Farm Service Agency under the Obama administration.

Chinese import demand should keep the livestock sector stable, but U.S. corn, soybean and wheat prices “will all be lower on oversupply,” he said. “The only hope is that yields are higher next year to counter some of the price losses.”

Another concern, said Basse: The United States is heading into an extended period of large stocks “without a new demand driver or numerous weather problems that cannot be forecast at this time.”

Patrick Westhoff, director of the University of Missouri-based Food and Agricultural Policy Research Institute, believes it would take a significant increase in soybean prices to make up for the impact of losing MFP payments.

In face, the price increase would need to be about $2 a bushel to offset a loss of MFP payments, given the MFP rate for soybeans of $2.05 a bushel. FAPRI projected in August that net market returns for soybeans would dip in 2020 with increased production offset by lower market prices. (The projection assumes the trade war with China continues through next year.)

“It would take a big bump in sales, which would might be hard to do in the presence of ASF,” he said, referring to the African swine fever epidemic that has devastated Chinese hog production and dropped that industry’s demand for feed.

USDA’s latest projections for 2020, released in November, estimate soybean net returns will rise in 2020 to $288 per acre, up from $264 an acre on higher yields and production but projects prices will slip from $9 to $8.85 per bushel. 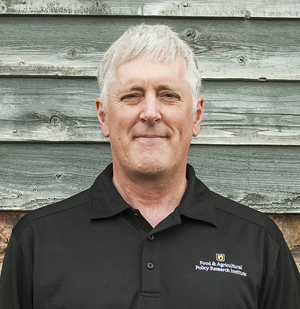 Both the USDA and FAPRI forecasts assume that China continues its retaliatory tariffs through 2020.

Cotton growers also have been helped significantly by MFP, which was reflected in a payment rate of 26 cents per pound, a rate so high that farmers in many cotton-growing counties qualify for the maximum MFP payment this year of $150 per acre. (The county rates that were used to calculate MFP payments to individual farmers were based on rates for individual commodities.)

Since the first half of 2018, cotton prices have dropped sharply both because of the trade war as well as a global oversupply.

Returns are expected to rebound in 2020 because of a return to trend yields, according to FAPRI, so it would take a smaller increase in prices to offset the impact of losing MFP payments, Westhoff said. “Of course, the average MFP payment for cotton is quite large, thus the maximum MFP payment rates in many cotton counties,” he said. 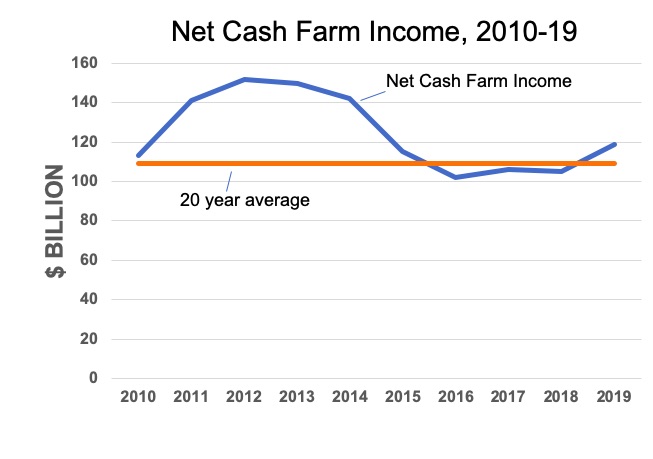 The latest monthly survey of farmer sentiment by Purdue University indicates that farmers are increasingly optimistic about a trade deal with China. In November, 57% of the survey respondents said they expected a resolution to the trade dispute soon, compared to 42% in October.

Purdue’s August survey indicated 58% of farmers expected another MFP payment to be made to U.S. farmers for the 2020 crop year.

That confidence may be well placed, given that Trump is running for reelection in 2020 and control of Congress will be up for grabs. But Agriculture Secretary Sonny Perdue, when he announced in November that USDA would make a second tranche of 2019 MFP payments, said farmers shouldn't count on the program being continued in 2020. Perdue said "we’re hopeful that trade would supplant any type of farm aid needed in 2020 in that regard."

Given the uncertainty about the trade war, the University of Illinois economists suggest landlords lower cash rents for 2020, “with contingencies for cases in which MFP payments occur. By doing this, base cash rent is set at a level that allows the farmer to generate profits and leaves open the option for both parties to benefit if MFP payments occur in 2020.”

In 2019, cash rents on highly productive land in central Illinois averaged about $274 per acre, the same level as 2018, but returns to farmers plummeted from $355 to $273 per acre, the economists said.