Assemblymember Susan Talamantes Eggman identifies with a number of labels. She comes from agriculture, has a Mexican heritage and understands LGBT issues. She credits this and her background as a social worker for being able to negotiate challenging issues across a range of stakeholders.

Eggman’s grandparents arrived in California from both Mexico in the 1920s and from Oklahoma during the Dust Bowl. She grew up in Turlock in a family of beekeepers, pollinating almond, cherry, pomegranate and pistachio trees. When they lived in the Bay Area, her father would wake up at 3 a.m. to deliver produce to the local schools.

She was elected to the Assembly in 2012 and represents the San Joaquin Delta communities of the 12th District. She chairs the Assembly Agriculture Committee and sits on the Natural Resources Committee.

The assemblymember from Stockton spoke with Agri-Pulse about the controversial environmental measures proposed in Senate Bill 1, about former Governor Jerry Brown’s Twin Tunnels project and about how legislating compares to marriage counseling.

1. How does your background in agriculture influence your policymaking?

My life has always been rooted in agriculture and rooted in the earth.

I'm a member of the Women's Caucus, the LGBT caucus and the Latino Caucus, and I have a unique perspective out of all those things. You wouldn’t necessarily think of somebody who holds all those labels as having deep roots in agriculture.

I chaired (the Ag Committee) when I first arrived here for two years, and now this is my second time. You learn a whole lot more about all the issues that agriculture faces.

One of my favorite things about being a legislator, and especially in agriculture, is to be able to go around the state, and even around the country, and see all the fascinating things, with different crops and issues. How and what we grow in Marin County is very different than what you'd grow in the Bakersfield area.

2. A lot of big decisions impacting agriculture and your district are made by urban lawmakers. What is your perspective on that?

That is why I try to build really strong relationships with other members. The other labels and caucuses I'm involved with provide me legitimacy to be able to talk about issues as they relate to urban members and also the real-life impact that they have on ag.

In saving our climate, we also have to acknowledge that we grow the healthiest and the most regulated food in the world. We need to keep that economy going as well. How do we do our part to save the environment and combat climate change, while at the same time not putting out of business one of the most vital businesses for California and the nation, and thereby the world?

If we're not growing it as clean as we can here – with people still able to make a profit and a living – then we're just telling other countries they should do it. We know they don't produce food as safely as we do. 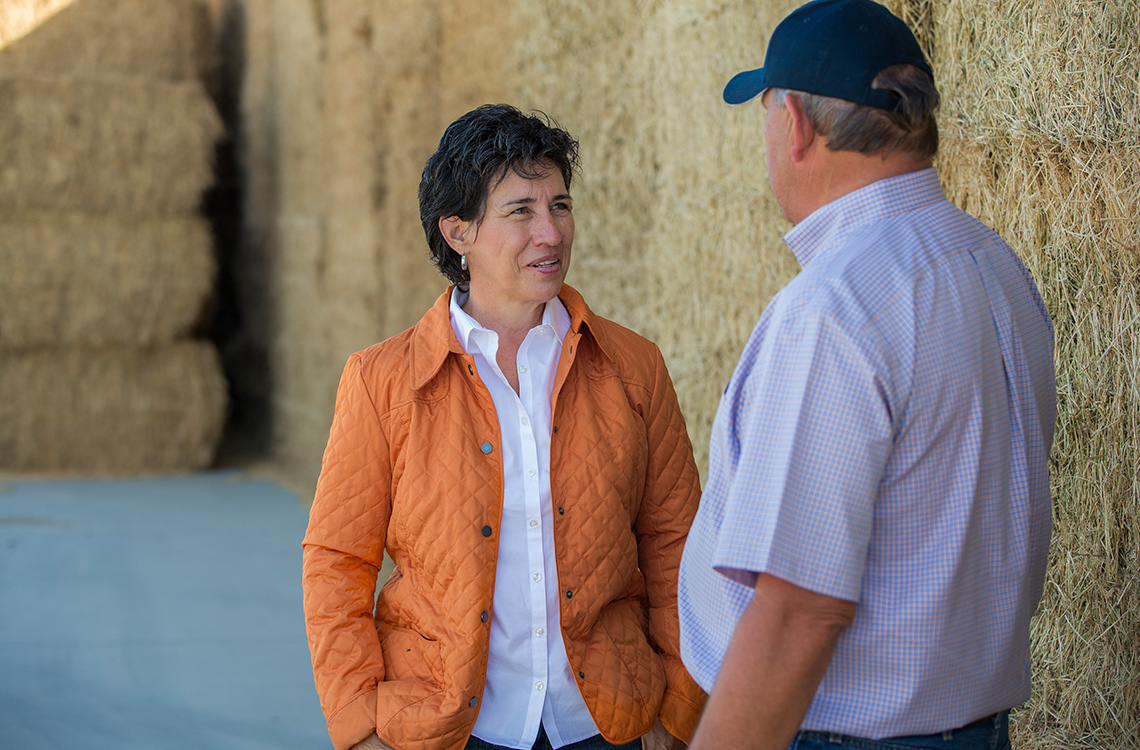 3. Describe how you balance your engagement with the ag community, the environmental justice community and the labor community.

My approach is to bring many people to the table and to not let the perfect get in the way of the good.

Ag for some time has had a tendency just to cross their arms and say, “No, we're not going to negotiate.” That is evolving and changing as everything around us changes.

I'm also a social worker and a licensed therapist. I’m not saying it’s like doing marital group counseling. But it’s about what it is they need and what their goal is. It’s trying to be that bridge. Everyone gets locked in their silos about what is right and good and just. But at the end of the day, we all want the same things for California to thrive and we all have to eat.

4. Are these issues that impact your district, particularly with bills like SB 1, creating a California versus Trump battle?

He doesn't help any.

I sat in Natural Resources when SB 1 was heard and there was a lot of concern from ag and the (California Chamber of Commerce) and other folks. My remark to Senator Atkins was: “I know you to be an agriculture-loving person. I understand your point. But how are you going to do it in a way that doesn't adversely impact ag and some of the voluntary water agreements that have already been established and negotiated? Her commitment is that she's still working on it. We have not seen the final product yet. [Note: The bill has seen amendments since this conversation took place.]

I was with her and the new CEO and President of Land O’Lakes and we had the same conversation about how we can achieve her goals and at the same time not produce unintended consequences and further regulation and burden on people who are already under the most stringent regulations in the world.

5. What are your thoughts on both the legislative session this year and the governor's first months in office?

One of the biggest things we've been working on is climate change, as it relates to wildfires, PG&E, and keeping the lights on. One big wildfire does more anti-climate stuff than half the regulations we do all the time.

People don’t think enough about agriculture being a wildfire buffer. Wildfires don't occur where agriculture is going on, because of the care of the ground and the irrigation

With the governor so far, I have been impressed. I represent the Delta area. In the previous five years, the only conversation Jerry Brown had with me about the Twin Tunnel idea was: “You won't even see them. They will be under the ground.” In the first three weeks in office, Governor Newsom had all of the people who represent the Delta area and the five Delta counties all at the table to hear our concerns. A couple weeks later, he said the Twin Tunnels are off and we're going to reevaluate how we transfer water.

So far, so good. And he's got vineyards; he's a businessman. I'd like to think we will have positive outcomes for the agriculture community.

I'm a big fan of Karen Ross. I am heartened that he reappointed her as secretary of CDFA. I traveled with her on a trade mission down to Mexico, and trade is imperative.

It feels like he is trying to make California feel like it is one state. Historically, people feel like there's coastal California and then the rest of us.