High-level U.S.-China negotiations used to generate high hopes for an imminent deal, but optimism is fading in Washington and the heartland even as new talks are scheduled next month.

Key to success in October will be China’s willingness to honor previous agreements that the country backed out of in May, but even some of the highest-level Trump administration officials are not optimistic that will happen.

“We would like to go back to where we were last May, but I don’t know if that’s possible …” National Economic Council Director Larry Kudlow said. “This is a difficult matter.”

“I’m bullish, but I’m not Pollyannaish about this,” he told a gathering of the National Farmers Union on Monday after warning that Chinese President Xi Jinping “is a communist zealot.” 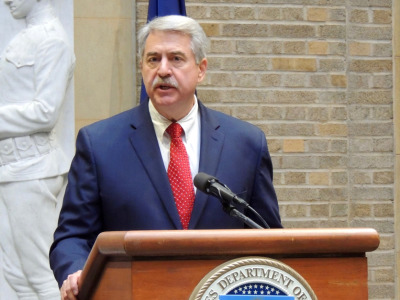 “I think it’s always a positive sign when people are talking, but I don’t think people should read into this that a deal is imminent because the issues that separate these two countries are wide, varied and serious,” U.S. Dairy Export Council President and CEO Tom Vilsack told Agri-Pulse. “It’s going to take a lot more than a few meetings … to get things resolved.

White House officials are warning of a protracted battle that could last years, while Beijing is projecting the will and stamina to outlast Trump. Neither side is backing down in the trade war that’s already stretched on for 17 months and grown more complicated with each tit-for-tat exchange of new tariffs and tariff rate increases.

Trump first got the balls rolling in 2017 when he asked for investigations into the national security threat from imported steel and aluminum as well as well as damage from China’s appropriation of U.S. intellectual property. It wasn’t until the first quarter of 2018 that his administration bypassed the World Trade Organization and fired the first tariff shots.

How the disputes snowballed

It was a frigid March in 2018 and snowstorms shut down government offices, but not Trump’s resolve to threaten the first shot in a trade war that eventually cut deeply into U.S. ag exports to China. It was on March 21 that Gregg Doud, the newly installed chief agriculture negotiator at the U.S. Trade Representative warned that the Trump administration had every intention to wage a trade war if China didn’t change its ways.

“Too many producers globally don’t operate under the same economics of supply and demand … like we do,” Doud said at an Agri-Pulse forum. “These folks have been breaking the rules for too long and President Trump has stepped into the breach and decided something has to be done about it and he’s absolutely right."

It didn’t take long before trade tensions worsened near the end of March. (See timeline below).

Most recently, Trump announced a retaliation to China’s retaliation. The U.S., he tweeted, would increase rates for existing tariffs on $250 billion of Chinese goods as well as boost tariffs on $300 billion worth of imports that haven’t yet been levied.

Starting Oct. 1, the U.S. will increase the tariff rate on $250 billion worth of Chinese goods by 5%. Also, the rate on new tariffs slated to go into effect for the additional $300 billion of Chinese products on Sept. 1 or Dec. 15 will be 15% instead of the planned 10%.

That’s the state of play now as lower-level U.S. and Chinese negotiators prepare this month for the ministerial level talks that are scheduled for some time in October.

Regardless of how long it takes to get a deal that stops China from appropriating U.S. intellectual property, Trump says he’s committed to finishing it.

Timeline for Major Actions in the Trade War with China

March 30, 2018: Out of concerns for national security, USTR said it would be levying a 25% tariff on Chinese steel and a 10% tariff Chinese aluminum.

April. 2, 2018: China hit back against the threat of the Section 232 tariffs, promising to retaliate with tariffs of its own - ranging between 15 and 25% - on $3 billion worth U.S. goods such as fruits, tree nuts, pork and wine. America’s almond, pistachio, orange and apple farmers braced for the impact.

April. 3, 2018: The Trump administration threatened to hit $50 billion worth of Chinese goods with a 25% tariff. The Section 232 tariffs were supposed to discourage China from overproducing steel and aluminum. New Section 301 tariffs aimed to punish China for its policies of appropriating U.S. intellectual property – including outright theft. More than a year later, it’s still one of the key sticking points in negotiations.

April 4, 2018: China announced it would retaliate on $50 billion worth of U.S. goods. This time it included soybeans on the tariff list. China was promising to strike at the heartland with a 25% tariff on U.S. soybeans, corn, wheat and sorghum.

April 5, 2018: USTR Robert Lighthizer confirmed the White House instructed him to consider hitting China with tariffs on another $100 billion in goods.

May 17, 2018: Lighthizer, Treasury Secretary Steven Mnuchin and Commerce Secretary Wilbur Ross sat down across a table from Chinese Vice Premier Liu He and others for the first of many high-powered, face-to-face negotiating rounds.

June 15, 2018, Trump announced the U.S. would proceed with threatened tariffs on $50 billion worth of Chinese goods. China again promised to retaliate. Midwest farmers began calculating the impact of a 25% tariff on their grain and oilseeds.

July 6, 2018:  The U.S. made good on its threat, enacting a 25% tariff on $34 billion worth of Chinese imports. The remaining tariffs on $16 billion of Chinese goods were enacted later. China reacted, effectively cutting off U.S. soybean exports while the country’s importers turned to Brazil. USDA data would later show that the U.S. exported $3.1 billion worth of soybeans to Chinese importers in the 2018 calendar year, about a fourth of the $12.3 billion it sold to them in 2017.

July 9, 2018: Trump ordered his top trade official to begin the process of finding an additional $200 billion worth of Chinese products to put import taxes on.

July 24, 2018: USDA announces it will provide $12 billion in farm payments, food purchases and trade promotion to help those impacted by the trade war.

Aug, 2018: China pledged to hit $60 billion worth of U.S. goods with tariff rates between 20-25%. There’s no way China could match the U.S. product by product because Chinese imports only totaled roughly $130 billion at the time, compared to U.S. imports of $505 billion.

Dec. 1, 2018: Trump met with Chinese President Xi Jinping on the sidelines of a G20 summit in Buenos Aires. Trump agreed to postpone the scheduled tariff rate increase on $200 billion of Chinese products and Xi promised China would buy more U.S. ag commodities. Over the next three weeks the USDA confirmed that China purchased 2.52 million metric tons of U.S. soybeans.

Feb 20-24 2019: U.S. and Chinese negotiators met again in Beijing in February and China pledged to buy another 10 million metric tons of soybeans.

May 2019: Lighthizer returned from Beijing and publicly accused China of “reneging” on agreements it had made previously. On May 6, he raised the rate of tariffs on $200 billion worth of Chinese goods from 10% to 25% and vowed to place 25% duties on the remaining $300 billion of imports from China.

May 13, 2019: China’s Finance Ministry announced intentions to raise tariff rates on $60 billion worth of U.S. products by June 1. The higher rates were aimed primarily at U.S. farm commodities such as citrus, berries, vegetables and nuts.

June, 2019: Trump and Xi met on the sidelines of a G-20 summit in Osaka, Japan, and again there was a reprieve in hostilities. Trump announced that the negotiations would start back up, the U.S. would hold off on the latest tariff threat and China would begin buying more U.S. ag commodities.

Aug. 1, 2019: Trump complained China was not moving fast enough to import more U.S. farm products announced via twitter that he would follow through to levy a 10% tariff on the $300 billion worth untaxed Chinese goods. Trump later clarified that half of those Chinese products would be hit on Sept. 1 and the other half, including popular consumer goods such as computers, toys, shoes, smartphones and video game consoles, would be hit Dec. 15.

Aug. 8, China revoked a goodwill gesture of exempting some Chinese importers from tariffs on U.S. soybeans and then soon after declared it would increase tariff rates on $75 billion worth of U.S. commodities, including soybeans, oats, barley, peanuts, potatoes, apples, oranges, lemons, limes, avocados, lettuce, broccoli, tomatoes, almonds, walnuts and many other crops grown across the country.