With an eye on the future of agriculture and the need to address shareholders' and customers' expectations, Bayer confirmed an ambitious plan to address climate change and a more sustainable farming future during events in Monheim, Germany this week.

“Agriculture needs to feed a growing world without starving the planet”, said Liam Condon, member of the Bayer Board of Management and president of the Crop Science Division. “We have the opportunity and responsibility to address the global challenges of climate change, biodiversity loss and food security to help create a better tomorrow for our planet.”

By 2030, the German firm, which acquired Monsanto last year, pledges to:

Condon said the firm decided when it acquired Monsanto that it wanted to establish entirely new sustainability standards with key performance indicators that can be validated by external parties and published and tracked annually. Just like annual financial goals and qualitative goals, executive compensation will be linked to reaching these sustainability goals.

“We think we need to be equally rigorous in measuring our progress on sustainability. Then it becomes more real for everybody,” Condon said in an interview with Agri-Pulse. “For us, it demonstrates a further level of commitment to show that this isn’t just (public relations). It goes to the core of the strategy.”

Speaking to farmers, journalists and influencers from more than 40 countries, Condon and Bob Reiter, head of research and development for the Crop Science Division, outlined new opportunities to protect crops based on a continuous improvement, a strong digital pipeline and what they described as “disruptive innovation” to develop personalized solutions for farmers.

Last year Bayer invested 2.3 billion euros (about $2.5 billion) in Crop Science R&D on a pro forma basis, more than any other competitor in the industry. This figure is expected to rise to over 25 billion euros accumulated over the next 10 years. Data captured by the firm’s Climate Corporation’s Fieldview, analyzed more than 60 million paid acres globally in 2018. Fieldview and is on track to enroll more than 90 million paid acres this year.

Recently, the company finalized an agreement with biopharmaceutical research company Arvinas to create a joint venture – newly named Oerth Bio- and explore how molecular-degrading proteins found in plants and animals can protect crops against threatening pests and diseases. John Dombrosky was named the chief executive officer of Oerth Bio on Tuesday. He previously served as CEO of the AgTech Accelerator, which sourced, formed, and developed emerging big-vision ag tech startups. 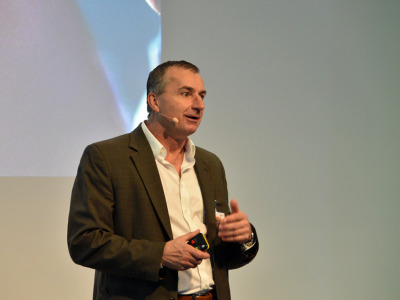 “We are very proud of our leading R&D pipeline with 75 projects in seed & traits, crop protection and Digital Ag pipelines”, added Reiter. “With hundreds of new hybrids and varieties commercialized annually, we are best-positioned to discover, combine and tailor solutions for growers around the world.”

Condon said, on average, it takes 10 years to get to market for a new crop protection or biotech product because of all the testing, safety and regulatory requirements. “We are already working today on stuff that won’t see the light of day until 2030 plus. We’d rather think in terms of generations rather than in terms of quarters.”

Still, as the company looks ahead, its stock value is stressed as it tries to navigate the Monsanto acquisition and its future with thousands of lawsuits clouding Monsanto’s legacy product, Roundup, which is applied on an average of 298 million acres of cropland in the U.S. every year and has been linked in the courts to cancer. Courts have already granted millions of dollars in compensation to plaintiffs. Those lawsuits have been appealed, but frequent television ads seek out new potential plaintiffs on a regular basis.

Condon says Bayer is on a dual path to deal with these legal challenges. One path is the judicial system. “We have three first instance verdicts that went against us. All of them go to appeal. Depending on the outcome, they will probably go through the appeals process and could very well end up at the Supreme Court level … particularly if you think about the fact that one of the key arguments on the plaintiff’s side is failure to warn … The EPA has clearly stated that no company can put any cancer-related warning on glyphosate because scientific consensus is it’s not carcinogenic. So that would be misleading consumers.”

“We think we are on very good grounds,” Condon said.

The other route is out of court settlement. “We are in the process of mediation that was basically put in place by a federal judge in one of three cases,” Condon says. “He wants us to explore the possibility of a settlement. We entered those discussions in good faith. But a settlement only makes sense if it’s financially reasonable and if it’s final. And of course, we need to make sure the product remains available for growers.”