After a decade of contentious negotiations, those involved are saying CV-SALTS is “not perfect and no one is satisfied” but the plan must move forward. The State Water Board approved the salt and nitrate plan yesterday by a vote of 3-1 with one member absent.

Yet a number of environmental groups and social justice advocates entered the discussion at the last minute, pleading with the board yesterday to narrow the timeline for completion and add required milestones. They said 45 years was too long to wait for safe and affordable drinking water.

Debi Ores of the Community Water Center pointed to a UC Davis finding that 80% of the Tulare Basin will already be impacted by nitrates in 30 years. She added that the Sustainable Groundwater Management Act has just a 20-year timeline.

Attorney Tess Dunham, who has shepherded the coalition from its inception, was surprised the board allowed the late comments. She defended the timeline, arguing it gives the Central Valley Board the discretion to decide if individual dischargers should be allowed the full 35 years to comply and if they would need the additional 10-year extension. Initially, the plan had proposed 50 years.

In approving the plan, the board also removed the 10-year extension. The dissenting voice was Dorene D’Adamo, who serves as the board’s agriculture member. She compared the plan to her work on a zero-emission vehicle initiative during her tenure on the Air Resources Board. ARB was not able to meet the standard it had set out, due in part to technology restrictions. Without any information showing the CV-SALTS plan is attainable, D’Adamo feared agriculture will be forced into a similarly difficult position.

“I don’t have hope with this,” she argued. “It’s going to be another nail in the coffin. People in the industry are going to be saying farming in California just doesn’t make any sense.”

D’Adamo requested the Central Valley Board perform a technology review, both before implementing the plan and then every five years, to determine if the goal is feasible.

Central Valley Board Executive Officer Patrick Pulupa emphasized that many of the concerns presented in the hearing will be ironed out over the next year as his team implements the plan. CV-SALTS will also go through a complete “renovation” every 10 to 15 years, providing an opportunity for stakeholders to check in and once again negotiate the policies. 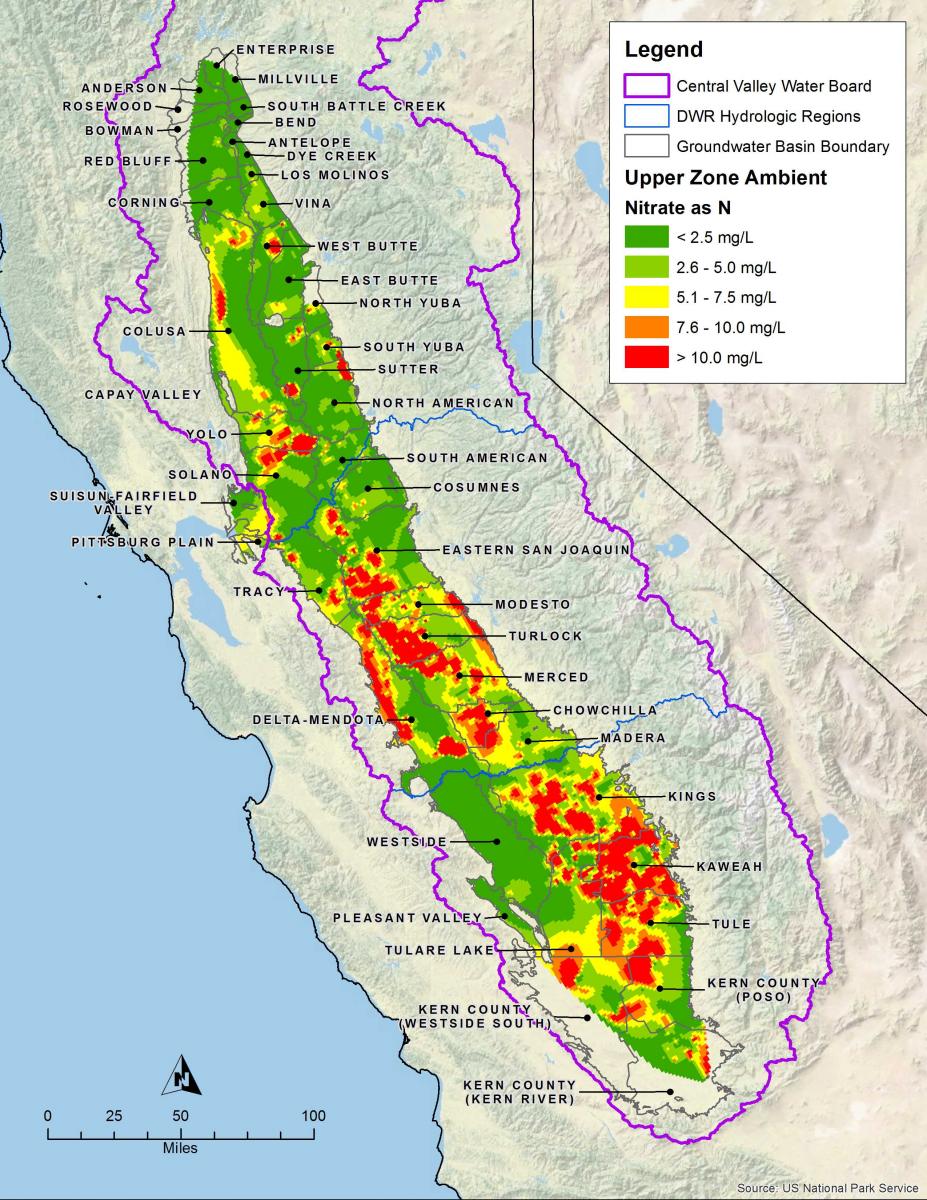 The U.S. is preparing to hit billions of dollars of EU products with tariffs — including a lot of dairy and other ag commodities — at one minute after midnight, and President Donald Trump says if the Europeans hit back, it will be a tariff war he’s confident the U.S. will win.

During a Wednesday press conference with Italian President Sergio Mattarella, Trump told reporters the U.S. “cannot lose a war of tariffs because the imbalance is so great between the United States and, in this case, the European Union.”

The U.S. earlier this month won the right to the retaliatory tariffs in a WTO fight over EU subsidies for Airbus. The EU expects to win similar rights to hit the U.S. with tariffs thanks to a separate WTO victory on U.S. subsidies for Boeing.

There’s still time to avoid the tariffs, both presidents said.

“We’re talking with some new people in Europe, and I hope it’s going to be successful,” Trump said. 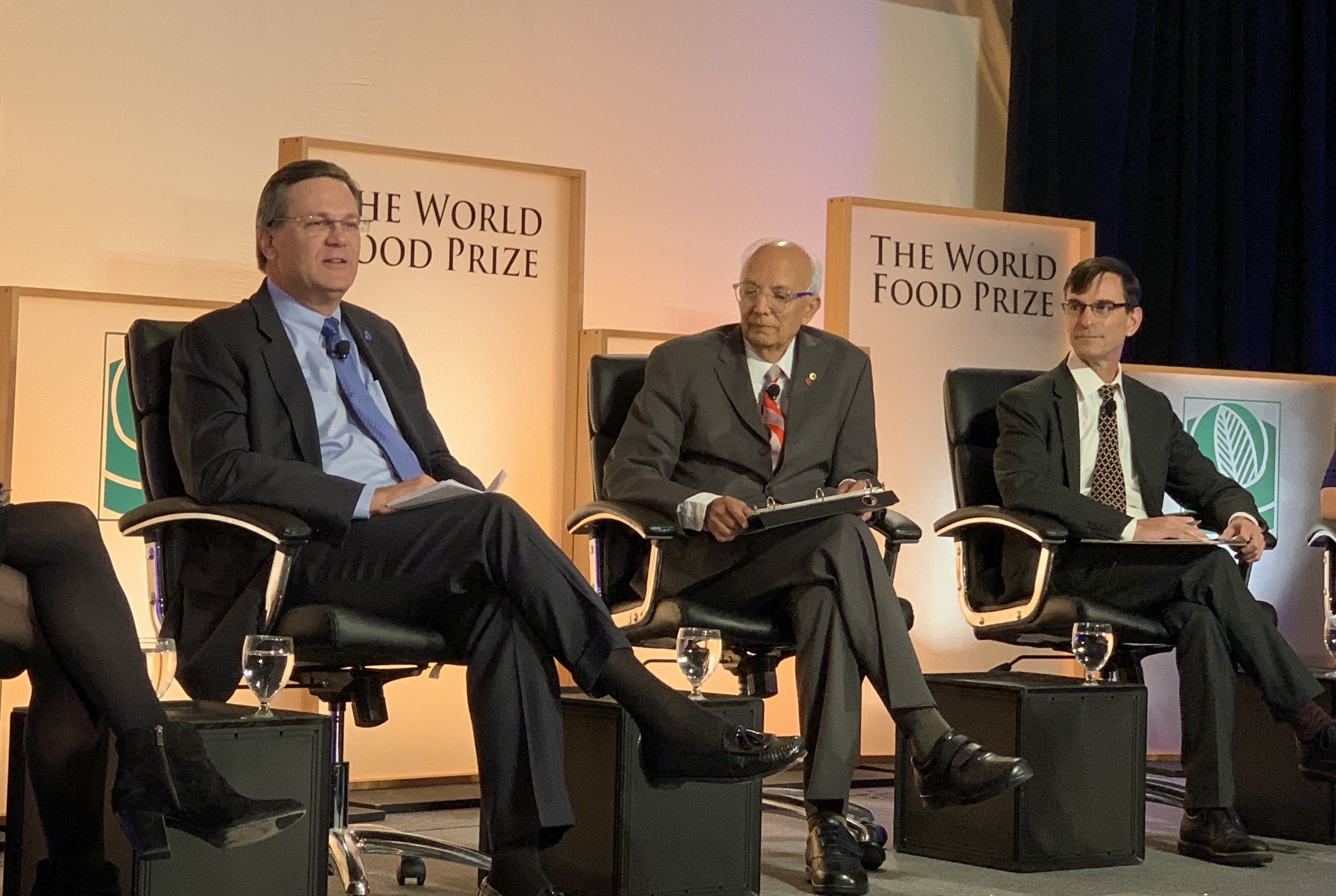 Jim Collins of Corteva (left) with Rattan Lal of Ohio State and David Festa of the Environmental Defense Fund at the World Food Prize symposium.

Corteva Agriscience, which is leading a discussion among industry executives, farmers, conservationists and others on how to address climate change, is committing $500,000 to help farmers experiment with new ”climate-positive" practices that reduce greenhouse gases.

Corteva CEO Jim Collins announced the pledge on Wednesday during a World Food Prize symposium in Des Moines, Iowa. He said the money would be “seed capital for a fund to reward efforts” that offset emissions in ways that make farms sustainable.

The ultimate goal is to get carbon-saving practices implemented on a broader scale, he said.

Keep in mind: Collins has convened four meetings over the past year involving industry leaders, non-government organizations and others on the climate issue, including a meeting earlier this week at the company offices outside Des Moines.

Few details of the meetings have been released. But one attendee, David Festa of the Environmental Defense Fund, described this week's meeting as substantive and included a good mix of key players on the climate issue.

By the way: Collins appeared on a panel with Rattan Lal, a soil science professor at The Ohio State University, who said that keeping carbon in the soil must become a public priority. He called for enacting a Soil Health Act — along the lines of the Clean Air Act and Clean Water Act — to stop soil degradation.

Cattle ranchers called the order an example of “judicial activism,” while environmentalists who had filed the lawsuit cheered the decision. Read our story at Agri-Pulse.com

WTO considers measure to appease US on judges

Walker’s “possible solution for overcoming the impasse,” as it was described by a Geneva official, addresses multiple U.S. concerns such as WTO judges exceeding their authority and issuing advisory opinions. But it’s still not clear if the WTO is willing to approve Walker’s proposals.

"It is now up to members to see how they wish to take this matter forward," he said at a general assembly meeting.

“The real big source is agriculture and there’s no off-the-shelf thing that we can do. There isn’t even the expensive option.” – Patrick Pulupa of the Central Valley Water Board on the hurdles ahead for solving salt and nitrate pollution in the valley.