House Democrats are about to attempt something that Washington hasn’t done in over three decades: Enact immigration reforms that would give farmers better access to foreign workers while offering legal status to their existing employees.

The House Judiciary Committee is expected next week to take up the Farm Workforce Modernization Act, a bipartisan bill that would expand the H-2A visa program and allow farms to import workers for year-round jobs while also providing growers some relief on wage rates.

The full House could take up the bill as soon as the following week, sending it to the Republican-controlled Senate.

The White House has yet to take a position on the bill, which will be opposed by some conservatives because it allows undocumented immigrants to get legal status if they have been working on farms. The conservative Federation for American Immigration Reform said the bill does nothing to encourage farms to adopt new technology to reduce their labor needs and instead “focuses on amnestying millions of alien farmworkers and giving them a path to citizenship.”

Another big question mark is the American Farm Bureau Federation, the nation’s largest farm group, which has yet to endorse the bill because of concerns with some of the H-2A provisions.

But the bill, which was introduced with 24 Democratic and 20 Republican co-sponsors, has the potential to be historic, given that Congress hasn’t passed immigration reform since 1986, when the H-2A program was created.

Sara Neagu-Reed, associate director of federal policy for the California Farm Bureau Federation, which broke from AFBF to support the legislation, said while it could be improved from agriculture’s perspective, “it struck a pretty good balance” between labor and farm interests.

The American Farm Bureau Federation, meanwhile, is seeking support for amendments to address its concerns with the bill. AFBF has three main objections: One is the cap on the number of year-round H-2A visas. The bill initially provides just 20,000 visas. Another concern is that the bill would make H-2A workers eligible for coverage under the Migrant and Seasonal Worker Protection Act, allowing those employees to sue farms in federal court for allegedly unfair treatment.

AFBF’s third objection is that the bill would continue to base H-2A wage requirements on a survey of farm labor earnings. The bill would freeze wage rates for one year and then cap the increases in following years, but AFBF believes the 2019 wage levels are excessive and the survey skews the rates.

The program's “adverse effect wage rates,” or AEWR, set a floor for what farms must pay the workers based on prevailing regional wages for farm labor. The rates are adjusted annually based on the gross hourly rate for field and livestock workers, based on the semiannual farm labor survey compiled by USDA’s National Agricultural Statistics Service.

The bill borrows from a proposed rule that the Labor Department issued this summer that would set differing AEWR wage rates for various occupations. Some workers such as machine operators would see higher wages, while field workers could see decreases.

But that proposal is still a concern because workers with multiple tasks would likely be paid the rate for the task that corresponds with the highest wage rate, said Allison Crittenden, a congressional relations director with AFBF.

AFBF’s overarching concern is that the group wants to make sure that the H-2A program would provide a sufficient number of workers, given that the bill would make it mandatory for growers to start verifying the eligibility of employees using the E-Verify system, said Crittenden.

“For us it’s a matter of making sure that any farmer engaged in any kind of agriculture will have access to labor and also will not be put out of business because of wage mandates,” she said.

AFBF is neither opposed to the bill, nor neutral at this point, she said. “We’re actively working to improve it. We want to make sure that that door remains open to improve it.”

The bill’s leading GOP sponsor, Rep. Dan Newhouse, a farmer and AFBF member from Washington state, is optimistic about getting the organization’s support. "I think we've been making a lot of good progress there," he said.

During the last Congress, AFBF supported a Republican bill that would have replaced H-2A without addressing the status of existing workers. The California Farm Bureau and the Western Growers both opposed that legislation, making it impossible for the GOP leadership to get the bill out of a House then controlled by Republicans.

Supporters of the bill say they will work to improve it as it moves through Congress.

The cap on year-round visas poses a challenge for several sectors, including the livestock industry, mushroom producers and greenhouse operations.

“Everyone on the employer side would love higher numbers,” said Craig Regelbrugge, senior vice president of public policy and government relations for AmericanHort, which represents greenhouse growers.

“In fact, we don’t support the notion of artificial caps anyway,” he added. “When you have a labor market test and elevated standards, caps are a redundant policy mechanism that stifles employment.”

But he noted that the cap isn’t permanent and that it increases the number of green cards available each year for permanent U.S. positions and gives agriculture first preference for them. The bill also would allow H-2A workers to apply directly for green cards after completing 10 years of H-2A work.

The National Pork Producers Council, meanwhile, has welcomed the bill despite the cap on year-round visas.

“Without visa reform to support a sustainable workforce, production costs will increase, leading to higher food prices for consumers,” said NPPC Vice President Jen Sorenson, who is the communications director with Iowa Select Farms. The group looks forward “to working with Congress in enacting visa reform that addresses the serious labor shortfall facing the pork industry,” she said. 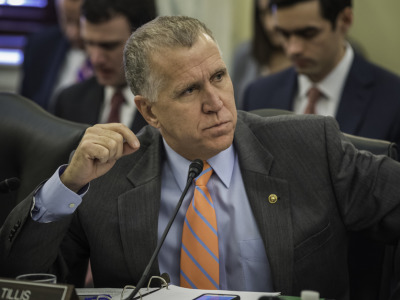 The bill’s future beyond the House isn’t at all clear.

Sen. Thom Tillis, a North Carolina Republican who serves on the Senate Judiciary Committee, has been in communication with farm groups about the bill, which he calls a “good first step.” But he told Agri-Pulse on Tuesday that he’s not certain that the Senate will take it up, in part because of the focus on impeachment. “Hopefully we can because I know the farmers need relief,” he said.

It’s also not clear that the bill can move without being attached to other immigration issues to attract sufficient support.

And unless the ag labor bill has substantial bipartisan support, it probably can’t pass the Senate on its own, but would have to be added to some other legislative vehicle, Tillis said. He noted also that there are still "concerns in the ag community" about the House bill, a reference to the fact that AFBF isn't on board yet.

Crittenden said from AFBF’s perspective, it’s good that the bill is not tied to other immigration issues. “One promising thing about this legislation is that it’s not getting bogged down in a broader immigration bill,” she said.

A spokesman for Senate Majority Leader Mitch McConnell, R-Ky., had no comment on the issue.