Home » A conversation with the CDFA undersecretary
WEST

A conversation with the CDFA undersecretary

Undersecretary Jenny Lester Moffitt has shepherded the evolution of climate-smart programs within the California Department of Food and Agriculture.

Joining CDFA in 2015, Moffitt applied the whole-system approach she had crafted as a fifth-generation farmer in Winters, an operation that has also evolved over decades. Her family’s previous farmland in the Santa Clara Valley is now at the heart of Silicon Valley and is home to a Hewlett Packard complex.

Rising to undersecretary in 2018, Moffitt is now the liaison to members of Congress as they negotiate the U.S.-Mexico-Canada Agreement as well as to international delegations sharing climate-smart practices and policy approaches.

Moffit spoke with Agri-Pulse recently on this as well as the governor’s upcoming Water Resilience Portfolio and on preparing farmers for an onslaught of new regulations.

1. How has your farming background influenced your role at CDFA?

As farmers, we very much take a systems approach. It's not just water quality or air quality or harvest in silos. They're very much integrated and integral throughout. I have been able to bring to the policy arena in Sacramento my systems approach thinking, whether it's incentive programs or regulations that are being discussed. If we are thinking about what it means for water quality, what does it also mean for food safety, for instance?

2. Can you describe the transition in moving from deputy secretary to undersecretary?

As deputy secretary, I was really focused on climate-smart agriculture, water and other resource issues. I still have that portfolio. But as undersecretary, that has definitely expanded to our animal division, with Newcastle or other animal-related issues or policies and programs. It's really broadened the portfolio.

A lot of my job is serving as a liaison between the governor's office, the administration as a whole and industry oftentimes.

3. Having worked under two administrations, what differences have you noticed?

Both governors are extremely well-versed on the issues in California and want to know the details. It's something I really relish.

They're different in some ways. Gov. Newsom is new and he's got new policies he campaigned on and is working vigorously to implement. It's been busy yet really fun and rewarding.

We’re trying to change the needle fast and do it in a way that is meaningful for all Californians, not just one subset.

4. When you started, the Healthy Soils Program was just getting off the ground. Can you describe the evolution of CDFA’s suite of climate-smart programs?

Actually, that was one of the reasons why I came to the department. I knew firsthand from the work we did on our farm that it was all about how we were managing our soils that led to our crop yields and how we're managing our water.

It was already formed well before I got here. It's really grown. It takes the systems approach that I come from and the secretary as well from her farming background. We need an all-of-the-above suite of solutions for agriculture, for climate change.

A big part of what we've been working on is dairy and livestock methane reduction through digesters and through manure management. That really got supercharged in 2016, when SB 1383 was passed. That landmark legislation really put the pressure on the dairy and livestock industry to find solutions. What I am so proud of is the fact that the industry stepped up. They have been bringing so many projects to the table that we are oversubscribed by at least double, if not triple sometimes in our grant funding.

There is just so much innovation — through technology, through partnerships, through different markets to tap into, whether that's low-carbon fuel or pelletized manure. They’re really starting to think out of the box in a big way, in a holistic way. I'm very proud of just how much we've been able to move that needle in a very meaningful way on methane in this amount of time.

We're also now really starting to look at pest management. This spring when the governor made it very clear that he wanted to end the use of chlorpyrifos here in the state, we partnered with the Department of Pesticide Regulation. We wanted the most meaningful way to implement this, with funding for research, technical assistance and a work group to talk about the solutions for the future. 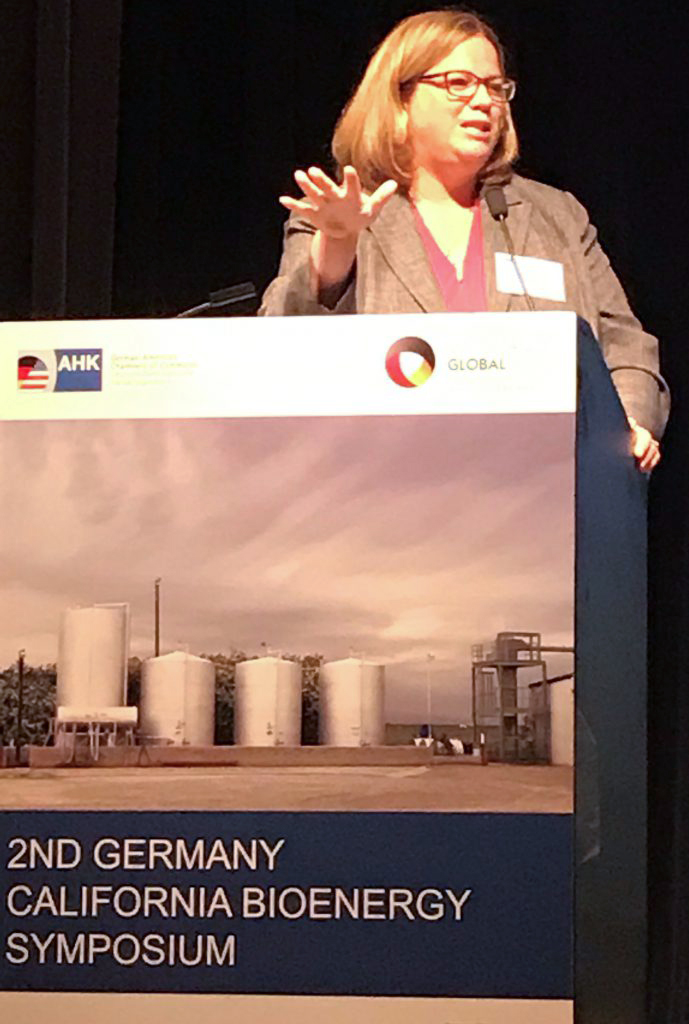 Moffitt speaking to a German delegation in September. (photo: CDFA)

5. Aside from mitigation, is CDFA helping farmers adapt to climate change and, on that note, to the Sustainable Groundwater Management Act (SGMA)?

Both pest management and Healthy Soils are going to be huge adaptation tools. Building soil organic matter helps hold water in the soil longer. A report that came out last year said a 1% increase in soil organic matter in agricultural soils would lead to 1.5 million acre-feet of water holding capacity just within the soil profile. That's a lot of water growers can hold within their soils. It helps with flood management and drought management, which are key adaptation tools

With SGMA, CV-SALTS and a lot of the water regulations that we have coming down the pike fast and furious, we are looking at tools and resources we have at the department and at the state. A lot of what we do in the department is really just partner with sister agencies on their implementation of their rules and regs as well.

We're working right now on the Water Resilience Portfolio, which is modeling what water will look like in the future. Then we are looking at how we can shift our state to adapt to those water models, with opportunities like groundwater recharge. It’s a great opportunity to take that water that we get and put it into reserves for the future.

Water is going to be a huge thing. It always has been in California and it definitely will into the future.

I was part of the Water Action Plan update that we did in 2016. That was an integrated approach. It was the Department of Food and Ag, the Resources Agency and all their boards and departments, and the same with CalEPA — the resources trio.

This one really starts to integrate some of the new models we have. There's a lot more that we have funded through our 4th Climate Assessment water modeling.

It has to happen at a regional scale. Whether you're down in the South Coast region or the North Coast, it is absolutely a different climate and a different way they're going to be adapting. As a state, we’re looking at the policies and programs to support regional approaches.

7. Can you explain how you engage with policymakers on the federal level and with international partnerships?

First and foremost is the Farm Bill. We hosted some listening sessions throughout the state as the 2018 Farm Bill was being considered and developed. Through those listening sessions, we gathered a series of recommendations that the state gave to our members of Congress here in California, who were part of the discussions.

We do partner with a lot of our organizations here in California and others on trade and supporting agriculture in markets. (This week) we’ll be joining a trade mission down to Mexico that is hosted by USDA.

The climate-smart ag tours are really important. It's opening doors to cross-sharing information. Israel is coming to meet with us and talk about efficient irrigation systems, they've got some amazing technology on removing nitrates out of dairy manure. Our universities, the companies here in California and farmers have a wealth of knowledge to share as well. We've done the same thing on biogas with Denmark.

8. What other priorities do you have for the next year?

One big priority, especially on Healthy Soils, is landowner partnerships, industry partnerships and research and technical assistance. As someone who ran my family's farming operation, the times we reached out to our cooperative extension advisers, our ag commissioners or our local resource conservation districts for technical support was an important tool that farmers look to so much.