The expanding shutdowns - and slowdowns - of U.S. meatpacking plants is raising concerns in the nation’s capital and putting a new focus on the need for curbing the COVID-19 outbreaks that are forcing plants to suspend or at least reduce operations.

“Everything comes back to personal protection equipment and testing in so many areas that we're trying to solve problems,” Sen. Jerry Moran, R-Kan., told a group of Kansas agribusiness leaders on Thursday. “I certainly would prioritize those who work” in the food supply system, he said.

Matt Teagarden, CEO of the Kansas Livestock Association, says that getting workers the masks and other protective equipment they need is critical to getting packing plants back into full operation.

The Wall Street Journal reported last week that Agriculture Secretary Sonny Perdue has been tasked with developing a plan to address the supply chain disruptions. In a statement to Agri-Pulse on Thursday, USDA said it “recognizes and supports the efforts of private industry and companies to maintain operational status of their facilities while also maintaining the safety and health of their work force.”

By the way: A bipartisan group of lawmakers that includes Senate GOP Whip John Thune of South Dakota and House Agriculture Chairman Collin Peterson of Minnesota sent a letter to Perdue on Thursday urging USDA to assist pork producers for the loss of processing capacity.

The appeal comes as Perdue is finishing work on a $16 billion relief package. An announcement had been expected as soon as today, but that could slip.

USDA’s Food Safety and Inspection Service has discussed a possible testing program with its inspector’s union, said Paula Schelling, acting chairman of the American Federation of Government Employees’ local, which represents about 6,500 FSIS inspectors. But she said she still wants to see what the plan will be.

While FSIS is not providing facial masks to inspectors, the agency is reimbursing them up to $50 for masks they buy or make themselves, she said.

More than 100 FSIS inspectors have contracted COVID-19, she said. One inspector, in New York City, has died.

Out of money: PPP suspended as funding lapses

Banks and Farm Credit associations have had to suspend filing applications for the Paycheck Protection Program after the Small Business Administration ran out of money to fund the highly popular forgivable loans. President Trump called on congressional Democrats to support replenishing the PPP with another $250 billion.

Keep in mind: It’s not a matter of if, but when Congress replenishes the PPP. And how long it takes. Democrats support the program, but are using the issue to get money for other priorities as well.

Take note: According to a Bloomberg News analysis, the Plains and upper Midwest states have been the most successful in securing PPP funding. Nebraska has received loans covering 75% of the eligible payroll. North Dakota got 71%, Kansas 69%.

One view from farm country: It took some Farm Credit System associations a week or more to get approved to participate in the program. While awaiting approval, Fargo, N.D.-based AgCountry Farm Credit contacted its 18,000 customers and advised them to apply for PPP through the association’s competitors, said CEO Marc Knisley.

“To us it was more important that our customers get access to the program than who administered the program,” he said. He thinks there’s still a lot of demand among farmers for PPP funding. 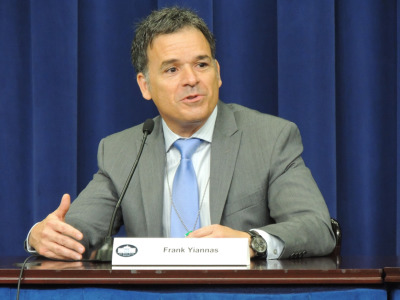 Yiannas, who has been overseeing development of a more data- and technology-driven approach to regulating food safety, says the project assumed that 20% of food would be bought online by 2023. “That benchmark may have been blown out of the water by consumers sheltering in place,” Yiannas writes in a Q&A. “I don’t see that trend reversing when the crisis has passed.”

The COVID-19 crisis also demonstrates the need to protect farm and food processing workers from illnesses, he says.

The cattle industry expects to lose billions of dollars amid the COVID-19 pandemic, but the USDA offered a ray of light Thursday, announcing that Chinese importers are buying U.S. beef – a much-anticipated result of the “phase one” trade deal.

“We don’t want to get too riled up over one weekly report, but we would expect to start seeing an uptick in activity now that we have more eligibility,” Schuele told Agri-Pulse. “There’s a lot more cattle eligible. There’s no doubt about that.”

The meat processing industry and a host of other manufacturers are becoming concerned about the looming threat of CO2 shortages as more ethanol plants idle production.

About 50 of the nation’s ethanol plants provide around 40% of the nation’s supply of captured CO2. “We’re doing whatever we can to help keep that supply flowing,” Renewable Fuels Association President and CEO Geoff Cooper told Agri-Pulse.

As of Thursday, according to RFA, 70 ethanol plants have completely idled production, 67 have reduced production and only 67 plants are running near normal production capacity.

Don’t miss: FDA has reversed course on allowing fuel ethanol to be used for making hand sanitizer, yet another blow to the ethanol industry, already reeling from plunging demand. Read the story here.

Washington state’s Supreme Court has reinstated an $18 million penalty against the former Grocery Manufacturers Association, now the Consumer Brands Association, for violating campaign laws in the state. But it also said the amount of the penalty must be reviewed.

In contributing $14 million to a campaign against a ballot initiative seeking labeling of GMO foods, GMA intentionally concealed the identity of member companies that contributed, a state court judge ruled in 2016.

The state Supreme Court upheld that judgment but remanded the penalty to the state court of appeals for reconsideration. “This penalty must be scrutinized carefully to ensure that it is based on constitutionally permissible considerations and is not grossly disproportional” to the campaign law violations, the court said.

Industry reaction: “We’ll review the ruling on this legacy issue in due time," said CBA President and CEO Geoff Freeman. "Right now we, and our industry, are rightly focused on providing Americans with the essential products they need to stay home and stay safe."

He said it. “If we lose a business on Main Street, if we lose a hospital in a small town, if we lose an ethanol plant, I think the chance of them returning … is a significant challenge.” - Sen. Jerry Moran, R-Kan., on the potential impact of the COVID-19 crisis.