Top lawmakers say Congress is looking at providing more money for payments to farmers to offset losses from the coronavirus pandemic.

“We are going to have to do more and exactly how we are going to structure it is something I would like to have some more dialogue more with my ag colleagues on both sides of the aisle,” said North Dakota Republican John Hoeven, who chairs the Senate Agriculture Appropriations Subcommittee.

Many farm groups and House and Senate allies are calling on USDA to eliminate any payment limits on the $16 billion in direct payments USDA is preparing to issue using money provided by the CARES Act, the third coronavirus relief bill. But Hoeven says some caps on payments are needed to make sure that every farmer gets some money.

However, he says the limits could be higher than the levels he had earlier announced: $125,000 per commodity for each recipient and $250,000 for all commodities.

Take note: He wouldn’t rule out providing direct help to ethanol producers down the road, Hoeven said. “We haven’t come up with something, but clearly that is something that is up for discussion.”

In a letter to President Donald Trump, the American Coalition for Ethanol is asking the administration to develop financial assistance for ethanol producers as agencies consider helping the oil industry.

New PPP round off to rocky start

The Small Business Administration started taking a second round of Paycheck Protection Program applications Monday, but lenders including Farm Credit associations had trouble getting into the SBA system.

One Farm Credit association had eight people working on the forgivable loans Monday but could only get three processed.

"Farm Credit institutions across the country are extremely frustrated by continued technical problems with the SBA lending system,” said Farm Credit Council President and CEO Todd Van Hoose. “We have hundreds of people working throughout the day to get loans for farmers and ranchers through the PPP, only to have the SBA system continually fail. We are doing everything we can, but this process needs to be fixed.”

A coalition of farm groups that includes the American Farm Bureau Federation and National Council of Farmer Cooperatives is asking congressional leaders to ease restrictions on PPP when lawmakers take up the next coronavirus relief bill.

Among the changes the groups are seeking: Allow Farm Credit institutions to access the new set-aside for small financial lenders; ensure that H-2A and H-2B wages qualify for the forgivable loans; and expand eligibility to farms and processors with more than 500 employees. 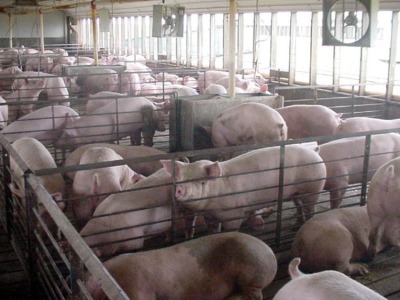 Iowa Gov. Kim Reynolds and the state’s Republican senators are asking USDA to compensate producers for hogs that have to be euthanized because of packing plant closures.

“Pork producers in Iowa and nationwide will go out of business, and the industry could further contract and consolidate, if farmers are not compensated for the animals that they have no choice but to euthanize,” the state leaders say in a letter to USDA.

Take note: Peterson told CNN he thinks some grocery stores will “have shortages of pork next week.” If plants remained closed “you can end up running out of pork completely.”

An FSIS statement goes on to say the agency recognizes how the guidelines “are implemented may differ given the unique circumstances of establishments and processing facilities nationwide.”

Smithfield Foods spokesperson Keira Lombardo said “based on a very preliminary assessment” that her company appears to be in compliance with the guidance at its plants.

Reactions to the guidance issued Sunday run the gamut. The National Cattlemen’s Beef Association says the guidance will give state and local governments “the information they need to protect worker safety, while continuing to support the operation of beef processing plants.”

But the Retail, Wholesale and Department Store Union, affiliated with the United Food and Commercial Workers Union, says the guidelines “should be mandatory and enforceable.”

Take note: A major beef packing plant that was shut down due to the coronavirus outbreak is back in operation.

More than 150 House Democrats are urging Speaker Nancy Pelosi and House Minority Leader Kevin McCarthy to include hazard pay for federal workers on the “front lines” in the next COVID-19 bill.

Those workers include Food Safety and Inspection Service inspectors, more than 100 of whom have contracted the virus. Two have died. The lawmakers also are asking for paid sick leave for those exposed to COVID-19 and support for expanded telework.

Related: A federal lawsuit has been filed seeking hazard pay for FSIS inspectors and other federal workers. The government’s deadline to respond is May 26.

Some of the largest groups representing U.S. and Brazilian businesses are joining forces to prod the countries’ leaders to use recent goodwill momentum and strike a bilateral trade deal.

“We strongly believe this pragmatic approach will unlock economic benefits for both our countries,” the U.S. Chamber of Commerce, Brazilian National Confederation of Industry and other groups said in a letter to trade and commerce leaders in both countries.

Brazil is a major importer of U.S. wheat, ethanol and farm equipment, and U.S. producers of all those products are hopeful that a trade agreement could help increase sales.

He said it: “We have made progress in the Roundup mediation discussions, but the COVID-19 dynamics and related restrictions have slowed the progress significantly, and we expect this to be the case for the immediate future.” - Bayer CEO Werner Baumann, on an investor call Monday, discussing pending lawsuits over Roundup exposure.