With an anticipated state budget deficit of $54 billion, the governor’s “May Revise” for his budget proposal was not going to bear much good news.

“There's been a pandemic that has precipitated a 22.3% reduction in revenue in just over 100 days,” said Gov. Newsom, setting the stage during a press briefing yesterday.

The state is instituting a 5% reduction across all agencies and departments. For CDFA, this amounts to a loss of $23 million from Newsom’s January proposal. Nearly 90% of that cut will come from infrastructure spending, such as expanding offices and buying new cars.

CDFA’s SWEEP program for water efficiency grants was slashed from $20 million to zero. It was heralded as the administration’s assistance to farmers adapting to the Sustainable Groundwater Management Act.

Yet the FARMER program remains a priority because of its benefits in emissions reductions through incentives for equipment upgrades. The caveat is the cap-and-trade revenue for FARMER and other programs was already expected to be down this year, and the budget proposal could not detail an exact amount just yet for the coming year.

Another priority is the AB 617 program, which incentives emissions reductions in agriculture as well as other industries in vulnerable and low-income communities like Shafter.

Safe drinking water and wildfire funding are also priorities. Anything left from the cap-and-trade funding after these four programs will proportionately go to climate programs under CDFA and other agencies through a “pay-as-you-go” mechanism.

Also on climate initiatives, the administration has withdrawn its plan for a Climate Catalyst Fund for low-interest loans as well as its support for a climate resilience bond on the November ballot.

Freudian slip? CalEPA Secretary Jared Blumenfeld, who is known to be critical of conventional pesticides, mistakenly referred to DPR on a press call as the Department of Pesticide Reduction. 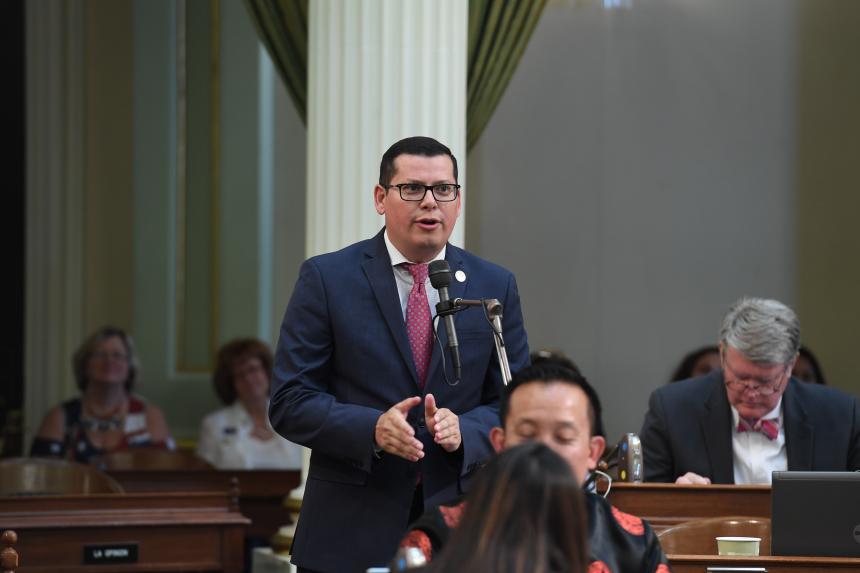 A proposal for managing lands to be fallowed under SGMA

The Assembly heard a new proposal yesterday for a grant program offering incentives for managing lands for ecosystem benefits when no longer farmed.

The bill is in response to recent studies finding at least 500,000 acres of land is likely to be fallowed over the next 20 years as SGMA is implemented.

The bill had no opposition and passed unanimously from the Water, Parks and Wildlife Committee. But its next stop is Appropriations. Given the budget reality, the bill’s future is uncertain at best.

On that note: A new bill emerging this week would help farm-to-food banks programs. It proposes a CDFA grant program for helping food banks pay for the labor to harvest donated food.

China opens up to US blueberries and barley

After years of wrangling over sanitary and phytosanitary issues, China is opening its borders to U.S. blueberries and barley, sparking new optimism from farmers who are looking to expand exports.

While the SPS negotiations were key to China’s actions, the country did agree to finalize its acceptance of the two crops in the “phase one” deal that was implemented in February.

“It certainly is positive for blueberry farmers,” said Bodke, who is also a former chairman of the North American Blueberry Council. “Any new market is an important market. We spend a lot of energy on developing and opening up international markets. … China has a great population of middle-class consumers that love blueberries.”

The Trump administration has finalized the first major changes to regulation of agricultural biotechnology in more than three decades.

As expected, a rule released by USDA on Thursday is getting mixed reaction in the ag sector. Farmers and the biotech industry are welcoming the streamlined regulatory process. But exporters are alarmed that companies won’t have to disclose crop modifications that they believe are exempt from regulation under the rule.

But, but, but: The National Grain and Feed Association, which represents major grain traders, criticized USDA for not requiring companies to disclose crop traits they self-certify as exempt from regulation. There needs to be “transparency in the types and uses of gene-editing and other technology being deployed and commercialized in U.S. grain and oilseed production,” NGFA says.

Greg Jaffe, biotechnology project director at the Center for Science in the Public Interest, a consumer advocacy group, said “government regulators and the public will have no idea what products will enter the market and whether those products appropriately qualified for an exemption from oversight.”

Keep in mind: EPA, which also regulates gene-altered crops that contain their own pesticides, is working separately on revisions to its rules. A proposed rule is expected this summer.

Read our report on the rule here. USDA has posted a Q&A here.

The Democratic-controlled House is expected to pass a $3 trillion stimulus bill today that contains an array of provisions for agriculture, including $16.5 billion in direct payments.

To no one’s surprise, the White House threatened Thursday to veto the measure. But the administration’s position statement also lists the president’s priorities for a new stimulus package, including business liability protections: The bill “should include a payroll tax holiday, safe- harbor provisions to protect businesses from frivolous lawsuits, permitting reform to facilitate infrastructure projects, and other policies to spur our economic comeback,” the statement says.

Although the House bill has no future in the Republican-controlled Senate, many of the ag provisions could show up in the next coronavirus relief package if lawmakers and the White House can agree on one. That’s not likely to happen before next month.

The National Milk Producers Federation said Thursday that the bill “includes multiple provisions to provide additional direct relief to dairy farmers based on the losses they face this year.” Among other things, the bill would enhance the farm bill’s Dairy Margin Coverage.

The International Dairy Foods Association welcomed a provision authorizing USDA to provide recourse marketing loans to processors and other companies to manage their supplies.

“This is a multiyear responsibility. We can't solve everything overnight, without catastrophic cuts that are simply too much to bear.” – Newsom, explaining how the administration plans to reserve most of the state's rainy-day fund for the even more difficult years ahead.