Assessing the cost of climate impacts before they ‘collapse’ ag

The state Senate heard a new bill this week that seeks to gather more data on the potential fiscal impacts of climate change in California.

The state has “a very good sense” of the science but needs a sector-by-sector analysis of the fiscal liabilities, according to the bill’s author, Sen. Henry Stern, who represents a section of Los Angeles suburbs. In a committee hearing, Stern called the issue a matter of getting ahead of droughts, floods, sea level rise and the extreme heat affecting farm labor productivity.

Sen. Anna Caballero of Salinas suggested the report includes ag’s role in sequestering carbon and that CDFA be consulted. Stern agreed, referring to ag the “tip of the spear” with climate change.

“The mega drought is here now,” he said. “Groundwater subsidence is here right now. The potential fallowing of (farmland). It's all very scary.”

The measure, Senate Bill 1320, passed with one “no” vote but no other opposition.

In a statement of support, the California Climate and Agriculture Network also pointed to food system risks, writing: "Do we have the regional diversity of farmers, food processors and distributors that we need to withstand shocks to our food system?”

The biggest concern for the bill is funding the measure during a recession. Stern said the costs for climate change outweigh the price for research. An extreme flood, for example, could cost California more than $700 billion. The disruptions to urban areas and agricultural lands alike “would break California,” he said.

On that note: Stern also responded to opposition to putting a proposed $5 billion climate bond on the ballot in November. He said that argument “really mistakes the scope of the fight we're in.” 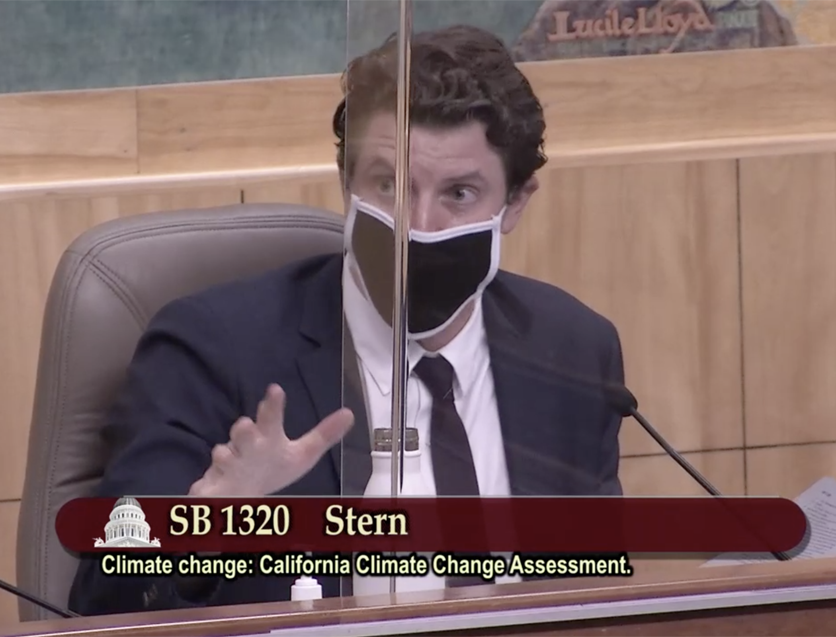 Sen. Stern, presenting his bill from behind a mask as well as a plexiglass sneeze guard.

United Farm Workers worried yesterday that not all growers will be able to supply enough shade for farmworkers while maintaining social distance. Recent Cal/OSHA guidelines call for additional seating and shade structures to maintain six feet of separation to prevent the spread of COVID-19.

In its statement, the labor group also worried masks could cause breathing difficulties and dehydration in the extreme heat. It called on Cal/OSHA to “beef up enforcement.”

Broadband plays a role in COVID response at fairs

CDFA is leading an effort to collect more data on broadband access at fairgrounds. When the pandemic hit, those details helped the state tap into fairs for staging emergency operations, said CDFA Deputy Secretary Arturo Barajas during a meeting of the California Broadband Council yesterday.

Barajas said knowing which fairs are connected informed the decision making for which fairs to activate.

Read about the proposed budget impacts on fairs in our latest report at Agri-Pulse.com.

On that note: Land O’Lakes CEO Beth Ford said in a Washington Post Live interview yesterday that “the most immediate and urgent investment that must be made as a country is in broadband and technology in rural communities.”

Senate Democrats are laying out their priorities for addressing the food supply chain in the next coronavirus relief bill. They include some innovative measures that would, among other things, use restaurants to prepare meals for the needy.

The $8 billion Food Supply Protection Act also would fund protective gear for workers on farms and in food processing plants as well as help processors retool to sell to new markets.

Why it matters: The proposals will have legs. Senate Minority Leader Chuck Schumer, D-N.Y., is a cosponsor of the bill as well as every Democrat on the Senate Agriculture Committee, led by ranking member Debbie Stabenow.

It’s notable that the bill would allocate about $1 billion to state and tribes to carry out feeding projects. Such funding is usually routed solely through USDA.

The foods targeted by the bill – meat, produce, dairy products and eggs – are among the same commodities featured in Ag Secretary Sonny Perdue’s Farmers to Families Food Box program.

Read the bill here and a list of groups that are supporting it here.

FDA is asking food facilities and farms to report temporary closures to the agency so it can keep up with what’s happening in the food supply chain and provide help where needed.

“In many cases, the FDA may not be aware that firms are temporarily closed or need to close as a result of the pandemic,” the agency said.

“More rapid and specific notification regarding the status of FDA-regulated establishments will help FDA understand the current status of the food supply and address challenges food producers are facing during the pandemic.”

The guidance doesn’t apply to restaurants and retail food establishments.

A doctor who serves on the House Ag Committee says he is more concerned about the mental health of farmers hit by the economic impact of COVID-19 than the virus itself.

Republican Roger Marshall of Kansas says the stress is real. “I don’t have to tell you folks. Fifth, sixth, seventh-generation farmers are going to lose it all because our packing plants are stalled and we’re backed up,” he said on a Western Caucus webinar Wednesday.

The Organic Trade Association is making the case that USDA incorrectly assessed the costs and benefits of an animal welfare rule that was withdrawn in 2018.

A federal judge in March granted the department’s request to correct a series of flaws in the cost-benefit analysis in both the original rule and the withdrawal action. USDA was given 180 days to publish a final rule “fully explaining its updated cost/benefit analysis.” A request for comment went out April 23.

In its comments to USDA, OTA says USDA overstates the mortality from organic egg producers and understates the amount consumers would be willing to pay for eggs from hens given outdoor access and not forced to molt.

OTA also says the 30-day comment period on the department’s analysis is insufficient.

“We've talked so much about heroes, our frontline essential workers, our food supply chain workers, our first responders, our healthcare workers, our teachers and classified workers. They are literally feeding us, teaching our kids, keeping us safe, keeping us healthy and in many cases keeping us alive. And many of them stand to lose so much from the proposed cuts in this budget.” – Asm. Rob Bonta of Alameda, during a special Assembly floor session on the budget Tuesday